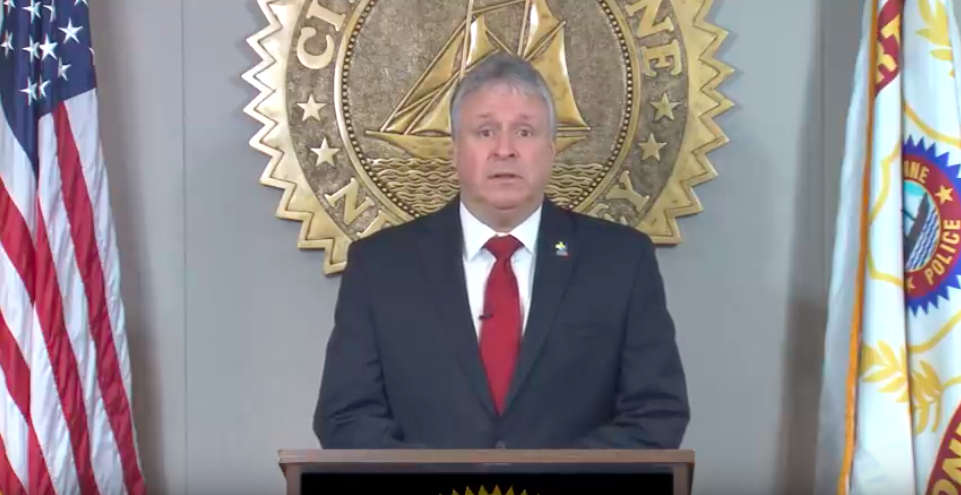 Mayor Davis have a COVID-19 video update on April 4.
×

Mayor Davis have a COVID-19 video update on April 4.

As the COVID-19 pandemic intensifies, the number of residents who have tested positive for the virus has climbed in municipalities across Hudson County.

In Bayonne, over 309 residents have tested positive for the virus with 10 residents who have passed away as a result. Mayor James Davis addressed the Bayonne community through a video on April 4, giving additional insight into the situation in Bayonne.

“The stay-at-home order is still in place. Non-essential businesses are closed. And yet our numbers of positive cases of Coronavirus continue to climb,” Mayor Davis said.

Davis said medical experts predicted that this would happen and that he sees the proof in the numbers every day.

“I get updated each morning when I get to my office and each night when I leave,” Mayor Davis stated. “Seeing these numbers is disturbing, to say the least.”

While the number of residents who have tested positive for COVID-19 increases as testing kits become more available, Mayor Davis remains optimistic about the future.

“I’m looking forward to the day the curve flattens and fewer of our residents are getting ill,” Mayor Davis stated. “And that day is coming fast.”

Later in his address, Mayor Davis explained how Bayonne counts the number of residents who are infected with COVID-19.

Beforehand, Davis said that the city shouldn’t be focused on the number of infected but rather focus on the situation at hand. Davis reminded residents to continue social distancing and washing hands to stop the spread of the virus.

He also encouraged residents to continue to follow the stay-at-home order and to reach out to friends and relatives during the crisis.

“In the era of telephones, smartphones, laptops, iPads, computers, zoom, and even e-mail, there has never been a better time to stay in touch with people while staying away from them,” he said.

After pointing out that the vast majority of COVID-19 patients recover, Davis explained how Bayonne counts the number of residents who have tested positive for the virus.

“Certain cities post their positive coronavirus numbers without taking into account the number of people who have tested positive and gotten better,” Mayor Davis explained. “The city of Bayonne isn’t doing that.”

Mayor Davis stated that many people in Bayonne have recovered from COVID-19.

According to the Bayonne Office of Emergency Management update on April 6, approximately two dozen residents that have recovered and are no longer required to isolate. They are not counted in the number of confirmed cases.

Bayonne Medical Center has reported that approximately 50 residents have been released from their facility to recover at home. OEM stated that a large portion of the current residents that are positive for COVID-19 are recovering at home.

“At some point, I hope one day soon, the number of those who have recovered from the virus will exceed those who are currently positive for it.”

And while that day may not come soon, Davis highlighted the importance of noting that residents are recovering.

“The full story is, more and more people are recovering from this virus every single day,” Mayor Davis said. “The whole crisis isn’t about numbers, it’s about people.”

In closing, Davis offered a prayer and his condolences for those who have passed from COVID-19.

“There is a light at the end of the tunnel, the story does not have to have a bad ending, and the vast majority of us will survive,” Mayor Davis said. “We will not lose our resolve and never lose hope.”

Bringing movie sets back to NJ