The municipalities involved include Union City, Weehawken, West New York, and Guttenberg, as well as North Bergen. The testing center is located at 36th Street between Bergenline Avenue and Kennedy Boulevard in Union City.

Non-medical volunteers are also needed to assist in the call center for appointment scheduling. To volunteer please contact Rebecca Acosta at 201-388-4633 or racosta@nhcac.org.

The testing site is truly a group effort. Currently, 62 people have volunteered to help staff the testing center, according to Weehawken Mayor Richard Turner. Of the 62 volunteers, 37 are from Weehawken.

The new site in Union City will allow more residents to have access to tests. The more tests that can be conducted, the more people can get treatment, and that saves lives.

Testing is done by appointment only. To schedule an appointment, residents are advised to call 201-366-8465. Residents must call for an appointment and be pre-screened in order to be tested. No walk-ins will be accepted.

Testing will occur from 9 a.m. to 4 p.m. for Guttenberg, North Bergen, Union City, Weehawken, and West New York residents only.

Residents are advised to only come to the site right before their appointment and maintain safe social distances. Persons who come without an appointment will not be tested.

Those without medical insurance will not be charged and tests are given regardless of immigration status.

“As you know, anyone can contract this virus,” Mayor Stack said. “Think of this testing facility as an extra layer of protection for you, your family and your neighbors.”

Mayor Stack said that residents who live in the neighborhood should not be alarmed.

“The location is secure and will be monitored by law enforcement from Union City as well as from other North Hudson municipalities,” Stack said. “This site will have an enclosed protected tent with side walls. There will be no outside testing.”

Any overflow vehicles will park in the parking garage with police officers present.

“We will completely minimize any impact to your block,” Stack said. “This virus is serious, and we must use all the resources we can find to defeat it. Testing will help save the lives of our friends and family.”

Stack noted that Union City will take every precaution to keep all residents, especially those who live nearby the testing facility, safe and secure during this time. 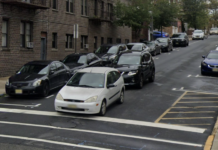