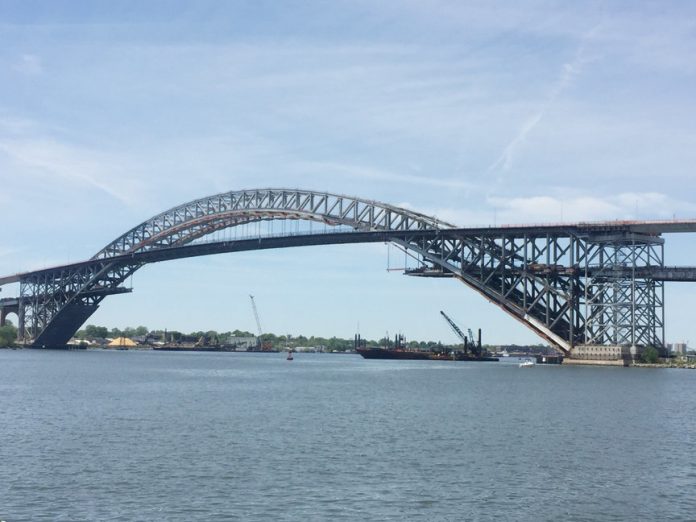 The bridge is a Bayonne landmark.
×

The bridge is a Bayonne landmark.

The Bayonne Bridge has won an award for the the project which raised its roadway higher to accommodate larger ships to pass under it on their way to Ports Newark and Elizabeth.

Officially known as the Bayonne Bridge Navigational Clearance project, the redesign was led by Henningson Durham and Richardson, Inc. (HDR). As a result of the project’s success, HDR has been awarded a top honor from the American Society of Civil Engineers (ASCE).

The HDR team partnered with the Port Authority of New York and New Jersey (PANYNJ) to raise the Bayonne Bridge deck 64 feet over the existing roadway while staying within the existing arch structure, using a new construction sequence during the process.

The award was presented at ASCE’s annual Outstanding Projects and Leaders Gala. A panel of nine judges picked the recipient based on originality and innovation, resourcefulness in planning and solving design challenges, sustainability considerations, and project planning and delivery.

Paving the way for giant ships

The project is commonly known as the “Raise the Roadway” project among residents. The choice to raise the roadway in this manner was considered the most efficient.

Using this method, both vehicular and vessel traffic were able to continue during construction. The increased clearance allows larger, post-Panamax vessels to travel beneath the bridge.

Panamax is a term given to ships designed to travel through the original entrance of the Panama Canal. Post-Panamax ships are vessels that do not meet those criteria.

HDR was the lead design firm in the joint venture with WSP USA. HDR designed the new deck for the main bridge span, the strengthening of the historic arch for increased wind loading, and the new segmental concrete approach superstructures.

The old roadway was removed in 2017. All four lanes of the new bridge opened in February of 2019.

“Our team’s creativity and engineering acumen was on full display on this landmark project,” HDR Transportation President Brent Felker said. “We’re proud to deliver such a historic effort for the people of New York and New Jersey.”

The project also won the Grand Conceptor Award in 2018. The American Council of Engineering Companies bestows the award annually to the top engineering achievement in the country.