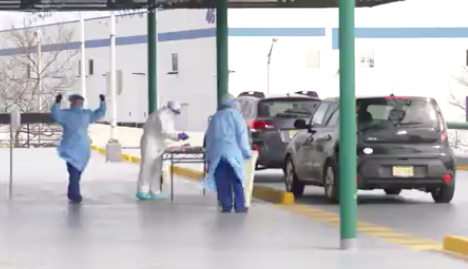 Drive-thru testing centers operate across the county, like this one in Secaucus.
×

Drive-thru testing centers operate across the county, like this one in Secaucus.

As some Hudson County municipalities flatten the curve of COVID-19, others are not so lucky. Union City is a hot spot, currently dealing with a surge of cases.

On April 6, North Hudson municipalities set up a joint testing site in partnership with the North Hudson Community Action Corporation in Union City.

To curtail the spread of the virus in Union City, Mayor Brian Stack announced the city was coordinating plans to open a second COVID-19 testing site for Union City residents only.

“We are working on opening a second testing site for Union City residents,” Stack said. “Testing is so important to getting people treated and saving lives. In the next few days, we will be providing more information on this second testing site.”

Social distancing and mandatory mask policies remain in place in Union City in all public places, according to Stack.

“Everyone is required to wear a mask or cloth face covering in public,” Stack said. “This could vary from anything from a surgical mask, cloth mask, scarf or bandana. The important thing is to keep your nose and mouth covered.”

Public places prone to spreading the virus are also being cleaned.

The Department of Public Works continues to clean and disinfect city streets, parks, and bus stops. Workers clean on rotation. On May 6, they disinfected all the side streets from 6th street to 49th street.

“Each day they continue to disinfect and sanitize another area of the city,” Stack said.

In addition to the cleaning, improvements are being made throughout the city.  The roads that have been damaged by the utility companies doing work are being repaired and will continue to be repaired throughout the next few months, according to Stack.

“Please take time to check in with your family, friends, and neighbors,” Stack said, “whether it is by phone, text messages, Facebook, or other social media. Having someone to talk to is very important, especially during this time.”

“We are one Union City,” he said. “We are stronger together, and we will get through this together.”