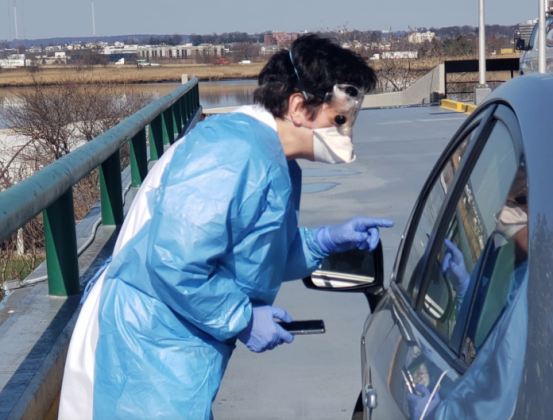 Other testing sites operate throughout the county, such as Secaucus.
×

Other testing sites operate throughout the county, such as Secaucus.

As North Hudson remains a hotspot during the COVID-19 pandemic, more testing sites have opened to serve local residents. Widespread testing is an important step in getting people treated and saving lives.

Mayor Richard Turner announced, in conjunction with Mayor Brian Stack of Union City, that a new virus testing site opened on 39th and Park Avenue in Weehawken on May 11. The testing will take place in the Tower Plaza parking lot, at the site of the former Acme, Monday through Friday, from 9 a.m. until 5 p.m.

Residents are advised they must make an appointment to get tested, but can get tested with or without symptoms.

According to Mayor Turner, testing is conducted by appointment only. For appointments, residents must go online to www.nhnj.us for more information.

Residents must wear a mask while waiting for a test. Mayor Turner has advised not to remove masks until instructed to do so by medical personnel performing the swab test.

Mayor Turner also said that the municipalities hope to be able to offer antibody testing at this site in the next several weeks when test kits become more accurate and readily available.

In Union City, North Hudson residents can still get tested at the other site on 36th Street, which will remain in operation until further notice. To make an appointment for that site, residents are advised to call 201-366-8465.