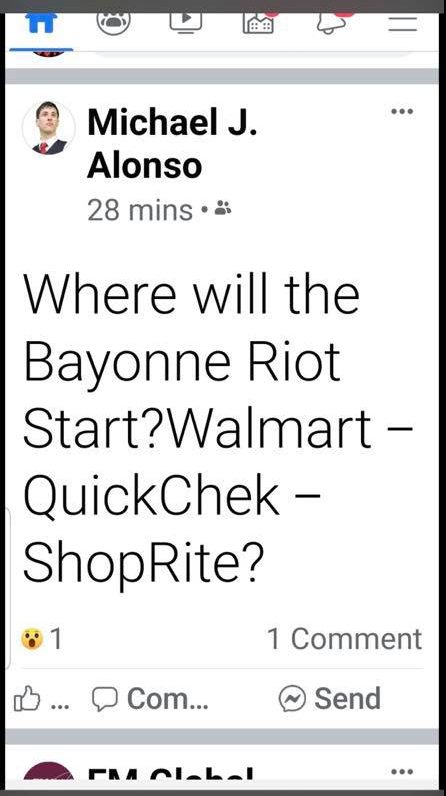 1 / 2
A screenshot of the post by Alonso in reference to the George Floyd protests before it was removed. 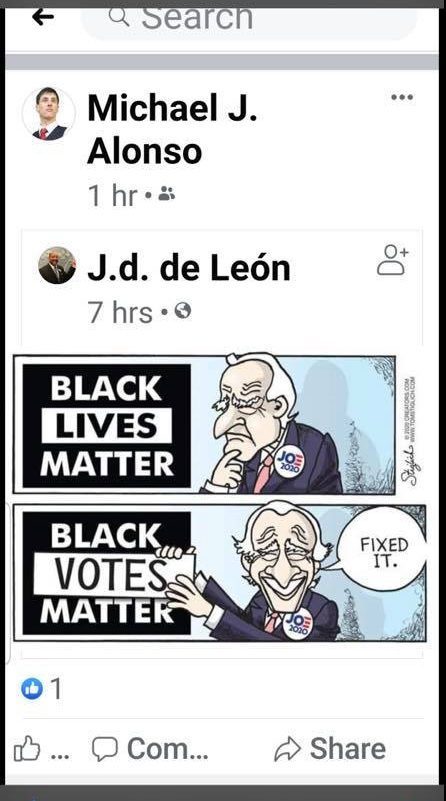 1 / 2
A screenshot of the post by Alonso in reference to the George Floyd protests before it was removed.

Trustee Michael Alonso has sparked controversy after a social media post that many view as racist and an incitement to violence.

He posted on Facebook regarding the demonstrations occurring across the country protesting the death of George Floyd.

Floyd was an unarmed African-American man who was killed in Minneapolis when police officer Derek Chauvin held his knee on Floyd’s neck for nearly nine minutes. Floyd was later pronounced dead. Chauvin has since been fired and charged with murder and manslaughter.

A screenshot of the post has been circulating on social media. However, it no longer appears on Alonso’s page.

In another post, pictured in this article, Alonso shares a political cartoon of Joe Biden changing a “Black Lives Matter Sign” to “Black Votes Matter.” It has since been taken down.

“This is absolutely deplorable,” Munoz said. “How dare he encourage violence in our beautiful city.”

In another statement on Facebook, Munoz said that he is deeply concerned and saddened by Trustee Alonso’s Social Media post.

“As a Citizen, Taxpayer, Husband, Father, Educator, and Vice President of the Bayonne Board of Education, I feel Alonso’s post is beneath his position as a BBOED Trustee and is not indicative of the sentiments of our community,” Munoz said.

“Bayonne is a progressive city that has been at the forefront of major change and community spirit,” he continued. “Our Students, Staff, Parents, and Community deserve better than this.”

Board of Ed Trustee Jodi Casais spoke against the posts in sharp and pointed words also on Facebook.

“And this my friends, makes me sick,” Casais said. “This is an elected official, a trustee for the BBOED posting this!!!!!!!!”

Casais went on to question how he was elected, reminding voters that he is up for reelection this year.

“How he was even Elected the first time blows my mind,” Casais said. “Remember this in November because his term is up on The board, and he is running for re-election. This Is an absolute disgrace!!!!!!!!!”

Many residents also questioned how he was elected on to the Board despite his views.

“What is wrong with him?” Lynn Marie Burbank wrote. “I pray the voters figure it out before they re-elect this guy based on his bs promises.”

Mike Morris, outspoken Bayonne resident and a familiar presence in city council meetings, condemned the post, saying “there are no real words for his ignorance here.”

“As a sworn BOE Trustee, he has a civil and moral obligation to protect the students, teachers, workers, and residents that elected him as a Trustee,” Morris wrote. “Reckless statements like this can and will be taken by some as a seal of approval to commit horrible crimes like we all have seen recently.”

“He should pray to God that no one of any race, age, color, and especially children are ever injured because of his reckless and cavalier statement,” Morris continued.

Some have called for Alonso to resign following the posts.

“You should be fired,” Rich Moscatiello wrote.

“How do we petition to get him removed immediately?” Stephen Waz wrote.

Many residents were calling for his immediate removal from the board by sending the posts to the Superintendent, urging for action to be taken. Trustee Casais said, “Everyone needs to email the board.”

“He shouldn’t be allowed to sit on that board until November. He needs to be removed now,” Tina Casais wrote.

“He needs to be removed… NOW,” Bridget Peterson Schumacher said.

“He can never and should never hold an elected position in this city or anywhere ever again.” Melissa Godesky-Rodriguez said. “The city of Bayonne and our BBOED should not have to be associated with this.”

The Bayonne Board of Education will hold an emergency meeting on June 2 at 9 a.m. at the Anna J. Herbert meeting room.

According to a joint press release by Board of Ed President Maria Valado and Superintendent John Niesz, the meeting is required in order to deal with a matter of such urgency and importance that a delay for the purpose of providing adequate notice would likely result in substantial harm to public interest.

“The meeting will be limited to discussion of and acting with respect to conduct by a trustee,” the statement said. The Bayonne Board of Education could not reasonably have foreseen the need for this meeting at a time when adequate notice could have been provided. The meeting will proceed upon the affirmative vote of three quarters of the members present. A closed session may be called by the board to discuss matters exempt by law.”

The public can attend in person, but occupancy is limited to 25 people, and those who wish to attend will be tested at the door for a fever, to limit the spread of COVID-19.

The meeting will be streamed virtually via the Board of Ed’s YouTube page. Members of the public who wish to comment can email their comments or questions to the Board Secretary’s at gmaita@bboed.org.