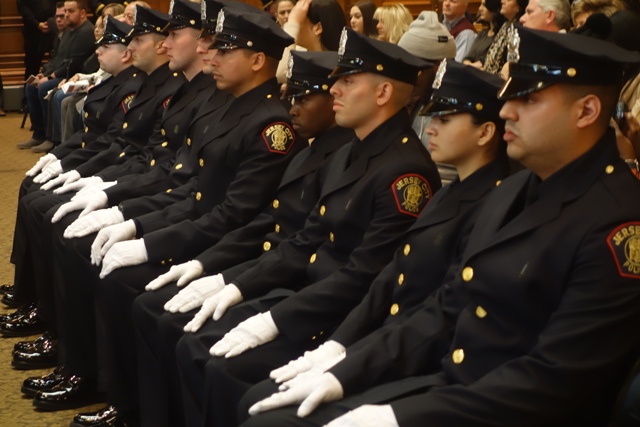 Jersey City Together, a nonpartisan coalition of more than 30 religious congregations and nonprofits in Jersey City and Hudson County; the Jersey City Anti-Violence Coalition Movement, which works to reduce violence and led several protests in Jersey City after the murder of George Floyd; and the ACLU of New Jersey have called on the state legislature and Gov. Murphy to adopt the legislation.

Jersey City and other municipalities across the state are considering enacting CCRBs.

“In this moment, we need more than symbolic commitments,” said Rev. Dr. Alonzo Perry Sr., a leader with Jersey City Together and senior pastor of New Hope Missionary Baptist Church. “The state legislature and Gov. Murphy can and should act now to affirm municipalities’ ability to create strong Civilian Complaint Review Boards.

“This would immediately increase trust in and community drive accountability for local police departments. We don’t need to wait for the NJ Supreme Court. Let’s act together now—we hope and expect with the support of local officials who have said they support strong CCRBs.”

Some officials are concerned about moving forward with enacting CCRBs, because a case currently before the NJ Supreme Court is considering whether Newark’s CCRB has the power to issue subpoenas, conduct an independent investigation of police misconduct, and review findings of police internal affairs investigations, under state law.

The court will determine if the “Police Force Statute,” which requires law enforcement agencies to follow the Attorney General’s guidelines for internal affairs investigations prohibits, these types of CCRB powers.

The Fraternal Order of Police Newark Lodge 12 filed suit against the city in 2016 shortly after the Newark CCRB was created by ordinance.

But the three groups say there is no need to wait for an official court rule. They want to press for immediate legislation to make clear that state law authorizes any municipality in the state to create a CCRB that will have meaningful oversight and hold police departments accountable.

“We’re tired of being told to wait’” said Executive Director of the Jersey City Anti-Violence Coalition Movement Pamela Johnson. “If Gov. Murphy and Mayor Fulop believe in this nationally recognized community-driven best practice, we need a full-court press to get this done at the state and local level. No more delays and excuses. The time to act is now.”

ACLU-NJ Policy Director Sarah Fajardo said that putting oversight power in the hands of the people is a crucial part of holding police accountable to the communities they serve.

“We need to make sure all residents have that power,” said Fajardo. “As America stands against injustices in our police departments, our state needs to take strong steps to allow community members to conduct real, meaningful oversight over the law enforcement agencies that control so much of our lives.

“For a civilian oversight board to have a chance at confronting abuses of power, it must have the authority to set policies, sufficient resources to investigate misconduct, and a degree of institutional buy-in to give their decisions formal weight—all of which benefit from formal endorsement from state government.”

She said the ACLU is committed to working with advocates and community members in Jersey City as well as across the state to guarantee review boards can pursue justice and accountability in earnest.

Assemblywoman Angela McKnight, who represents the 33rd legislative district which includes parts of Bayonne and Jersey City, is proposing a bill that would require enforcement of an updated policy for use of force by each law enforcement agency in the state and also requires a Civilian Complaint Review Board in each municipality.

Mayor Fulop tweeted that he looks forward to enacting a strong civilian complaint review board as soon as Trenton allows it.