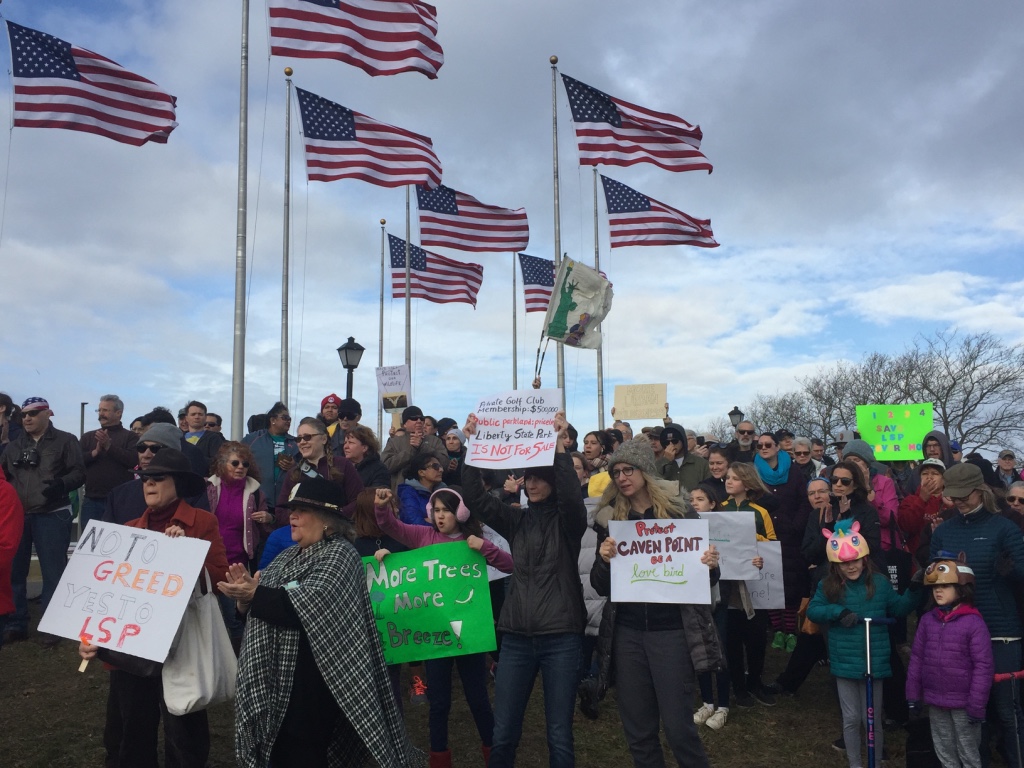 In January members of the community held a rally at Liberty State Park urging the state to protect it form privatization.
×

In January members of the community held a rally at Liberty State Park urging the state to protect it form privatization.

In an 8-1 vote, the Jersey City Council has adopted a resolution urging the state to pass the Liberty State Park Protection Act, which would protect the park from privatization.

Attempts to purchase pieces of the park for private use have been made over the years, including for casinos, luxury condos, golf courses, a racetrack, a water park, a yacht marina, a doll museum, and a high-end strip mall.

The bill would create a committee which would help the Department of Environmental Protection plan for the park’s future.

This committee was a deal breaker for Ward F Councilman Jermaine Robinson, the only councilperson to vote against the resolution.

He argued the protection act is not inclusive enough of his Black constituents. None of his residents or members of local non-environmental community groups would be appointed to the committee.

The nine-member committee would include multiple environmental advocacy groups, members of the NJDEP, and governor appointees.

“I think a vote tonight says that we’re voting to say that this language inside of this bill is the correct thing,” Robinson said. “To not have a person from this side of the community a part of that is disgraceful, and it speaks to the institutional racism.”

While he supports protecting the park, his constituents want more active recreation for youth.

“The bill that’s now in Trenton, to me, says nothing about active recreation and to vote on this, it would basically say that I’m OK with just only having passive recreation, and I don’t think that’s fair to the kids out here killing themselves and shooting each other,” Robinson said.

“If you don’t give these kids something to do, they’re going to continue that uptick … I think a vote tonight says that we’re voting to say that this language is the correct thing, and to not have one person from this side of the community part of that is disgraceful.”

Fireman announced the day of the council meeting that he was “halting’ his attempts to place holes on Caven Point due to “social justice problems.”

“For decades, Jersey City’s minority communities have been systematically shut out of the decision-making process on Liberty State Park,” he said. “No one asked the communities’ opinions or cared about what was truly needed, and decisions were made for them.”

He said he was being used by people who did not want to empower minority groups in an effort “to distract from the real issue of who gets to make decisions.”

“I will not be used as an excuse for inaction any longer,” he said. “That is why I am halting any efforts to pursue a public private partnership at Caven Point. I am doing this to force the supporters of the Liberty State Park Protection Act to address the social justice problems connected to Liberty State Park without using me as an excuse to keep ignoring minority communities.”

The majority of residents who called into the meeting thanked the council for adopting the resolution.

Several said that the Black Lives Matter movement was being co-opted for personal gain.

“Black Lives Matters is too important a movement to be co-opted for three holes of golf,” said resident David Case, adding that it is “heartbreaking to see Paul Fireman succeed in creating racial division in Jersey City.”

The resolution included language that urged lawmakers to amend the act to include Jersey City groups that represent residents of Ward F and Ward A on the advisory committee.

He added that while Fireman said he was halting his attempts, they were only temporary.

“The NAACP commends Councilman Jermaine Robinson for putting action behind the words of social justice,” Smith said. “We have advocated for changes to the ‘Liberty State Park Protection Act’ because the legislation was flawed, and it discriminated against minority advocates and against minority interests. Councilman Robinson’s advocacy has resulted in an acknowledgment by the Jersey City Council that the Protection Act is in fact flawed and must be changed to include minority representation and active recreation. The devil is now in the details, and we will not accept feel-good representation while others enjoy greater representation.”

Jeff Tittel, director of the New Jersey Sierra Club, issued a statement urging the state to put the act into law.

“Now that Jersey City has passed this resolution, the Legislature needs to step up,” Tittel said. “The Senate and Assembly need to get this bill to Governor Murphy’s desk this year to make sure that the park that is named after the Statue of Liberty belongs to all of us and stays open to all of us.”

He urged the Speaker of the Assembly and the Senate President to post the legislation so that the “Governor may sign the essential and landmark law to protect, once and for all, our urban, state and national treasure behind Lady Liberty,” calling it a “no brainer.”

He said he is for expanding the advisory committee, and he is sure that state legislators will make excellent choices on whom to add.