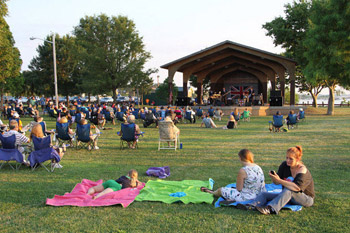 Summer Sounds by the Bay at 16th Street Park. Photo courtesy of the City of Bayonne.
×

Summer Sounds by the Bay at 16th Street Park. Photo courtesy of the City of Bayonne.

While many events have been cancelled or postponed due to the COVID-19 pandemic, in Bayonne, a popular local concert series will be held.

Mayor James Davis and the Division of Recreation have announced the
schedule for the 2020 Summer Sounds by the Bay music series.

“Although we could not offer a full eight-week schedule, we are thrilled that we can provide live music performances every Wednesday at 9 p.m.,” said Division of Recreation Supervisor Pete Amadeo in a COVID-19 update video with Mayor Davis on July 30.

Each performance will be begin promptly at 7 p.m. at the amphitheater on the lower level of 16th Street Park, between Avenue A and Newark Bay.

Bring their own chair. Social distancing will be enforced.

Face coverings are required when social distancing of six feet between
individuals cannot be maintained. The only exception is where doing so would inhibit that individual’s health, or when an individual is in extreme heat, per the New Jersey Department of Health guidelines.

The band plays classic soul and R&B, current R&B, and pop hits. Watson has toured with groups like the Police and Alicia Keyes.

On August 12, The Large Flowerheads

It channels the musical sights and sounds of the ’60s, such as The Beatles, Rolling Stones, Sonny & Cher, The Mamas & The Papas, Tom Jones, The Monkees, and Jefferson Airplane, among others.

The Cajun-style New Orleans group is celebrating its 30th year.

On August 26, Bobby Bandiera and Jim Babjak of The Smithereens will rock out.

In the event of inclement weather, call 201-471-7590, or visit www.leaguelineup.com/bayonnerec.

Check the City of Bayonne’s Facebook page for the status of that night’s performance.

‘A Mile Scare Halloween’ to stream this weekend