Throughout the COVID-19 pandemic, many cities have coped with a littering problem of used masks, gloves, other personal protective equipment (PPE), and medical waste.

Bayonne was no stranger to this problem. However, as the littering issue persists, local officials have been working to find a solution.

In an interview with the Bayonne Community News, First Ward Councilman Neil Carroll described his efforts behind the Clean Sweeps Initiative.

Carroll said he started getting phone calls in the First Ward about litter, mostly used PPE among other things at the start of the summer.

As a result of the littering issue in the First Ward, he started the Clean Sweeps Initiative. 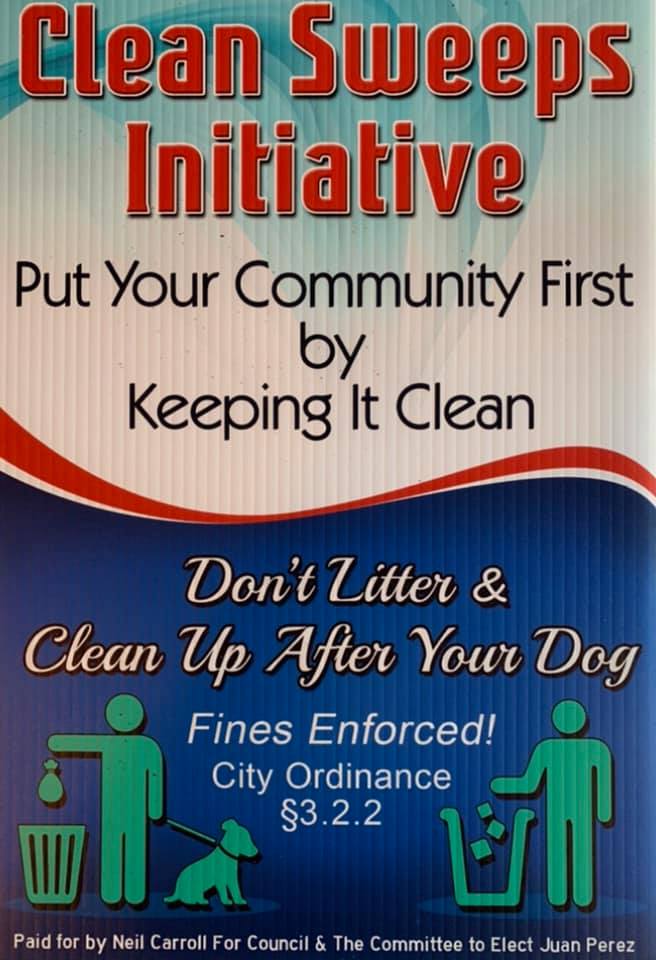 The initiative began with Phase 1, which involved clean sweeps by local Scout groups.

Carroll reached out to Boy Scout troops in the First Ward of Bayonne to help with the initiative, donating appropriate materials for the clean sweeps.

Then, once a week the Scouts would call Councilman Carroll, asking if there’s a block in need of a clean-up.

Carroll would notify the Scouts of any blocks or hotspots where litter needed to be cleaned up. The Scouts would then head out to the location and perform a “clean sweep” of the area. In return, the Scouts received service hours for their efforts in the Clean Sweeps Initiative.

Now, in addition to the clean sweeps carried out by the Scouts, Carroll said the initiative has expanded into Phase 2, taking the cleans weeps city-wide.

Phase 2 includes a signage campaign to help combat the issue, which began on July 28. Businesses can request signs to hang in their window across the city, reminding residents to clean up or be fined.

“I wanted to get some signage up and remind people that there are fines that go along with these things,” Carroll said, referencing the littering of used PPE and other medical waste in the city.

“Cleaning the community is a responsibility for everyone,” Carroll continued.

Councilman-at-large Juan Perez saw the good the Clean Sweeps Initiative was doing and signed on to help. Perez joined Carroll on July 28 for the launch of Phase 2, which involved the councilmen distributing some signs where the littering issue has been recurring in the First Ward.

As a result, six businesses agreed to put up signs in their window. Additionally, the Bayonne Chamber of Commerce reached out and asked for several signs to be placed in front of their businesses, taking 10 signs in total.

With the initial success at the start of Phase 2, Carroll and Perez hope to bring the rest of the council on board as the initiative expands city-wide.

Carroll said the ultimate goal of the initiative is to inspire others to conduct their own clean sweeps across the city.

“The Scouts continue to do their part, and what I’m hoping for is that inspires other groups,” Carroll said.

Carroll said the initiative was inspired by the yearly Earth Day cleanup, which this year was essential to cleaning up parts of the city littered with used PPE.

Carroll wanted to keep “the same enthusiasm every day, or at least once a week” as the Earth Day clean-up, and thus, the Clean Sweeps Initiative was created to address the issue.

“We started with stores because, now that everybody is starting go back out again, we want to make sure Broadway, our shopping district, as well as all every neighborhood is clean and safe,” Carroll said.

And while stores and businesses were addressed first, Carroll said that the signs are available to everyone.

“We’re happy to give them to anyone who wants to put them up,” Carroll said. “We want to truly make it a city wide affair.”

Collaborating with the community

If the initiative gains more traction, Carroll hopes to expand his efforts further into a potential Phase 3.

“If we can get some attention and investment from the community, what I would like to do is meet with the administration and try to put together a group to look into making sure fines are enforced and that public areas are being kept as clean as possible,” Carroll said.

Carroll said he would like to bring in civilians as well as administrative personnel to collaborate on keeping the city clean, whether that means new trash cans in certain areas or other ideas.

Overall, the initiative is a great start to combat the persistent issue of littering used PPE in Bayonne.