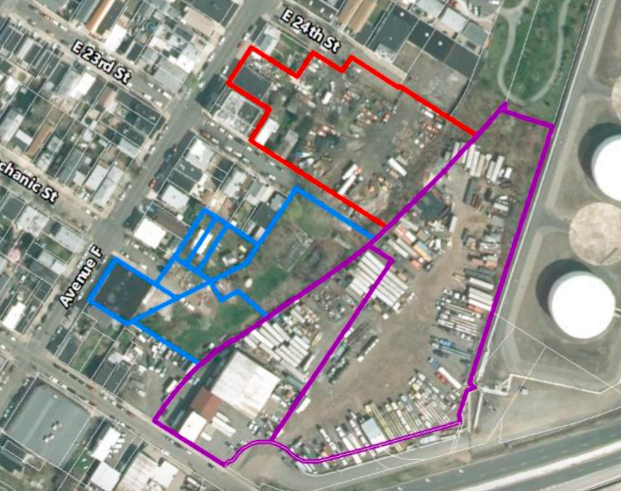 The Bayonne Planning Board held a special meeting on July 29 to approve four applications allowing for the construction of “Avenue G” and a surrounding “transit village.”

Construction will take place at the former sites of Dante’s Construction and Ken’s Marine Services.

Though the applications were filed by different developers, they were presented by attorney Michael Miceli as one project.

The first application subdivided 8.5 acres into five lots for the construction of Avenue G and the surrounding redevelopments. Three lots contain the developments, one contains Avenue G, and the last will remain empty.

Avenue G will run from East 24th St., and connect to East 22nd St., extending the dead-end roads to connect to it. Mechanic Street will remain a dead end.

East 22nd St. is one way connecting to Route 440 that will now connect with Avenue G. East 23rd St. will be extended to connect to Avenue G and will remain two way. The new intersection will have stop signs on all sides.

The Bayonne Mosque and Community Center is nearby on East 24th.

Twenty parking spots will be created on Avenue G, including an additional 12 spots created with the extension of East 23rd St. to connect to Avenue G. The new streets will have decorative light fixtures and trees.

The third application will construct a six-story development with 197 units by RAM Development LLC. The redevelopment borders Avenue F, Mechanic Street, the extension of East 23rd St. that will connect to Avenue G, and Avenue G itself.

Twenty-four units will be studio apartments, 100 will be one-bedroom, and 73 will be two-bedroom. The building will include 230 parking spaces, 71 compact spaces, five electric vehicle charging stations, and 100 bike spaces.

There will be a courtyard on the ground floor and private terraces on the third floor.

Forty-four units will be studio apartments, 173 will be one-bedroom, and 137 will be two-bedroom.

Outspoken resident and controversial former candidate for city council Peter Franco noted parking issues that might be worsened by the redevelopments.

Nick Takas, a homeowner on Avenue F, said that nearby homeowners had been left out of the plan.

Attorney Miceli said that only buildings designated for redevelopment became a part of the plan. Occupied homes in good shape don’t fall into that category.

The board voted unanimously to approve all four applications.

The board also adopted a resolution that allowed for the construction of a five-story multifamily building with 44 units and 46 parking spaces at 117-121 Prospect Ave. The redeveloper, TFG 117-121 Prospect Ave Renewal LLC, will also contribute $250,000 toward replacing the pedestrian bridge crossing the light rail at East 25th St.

The next planning board meeting is August 11 at 6 p.m.

Construction of ferry terminal to begin after winter, officials say