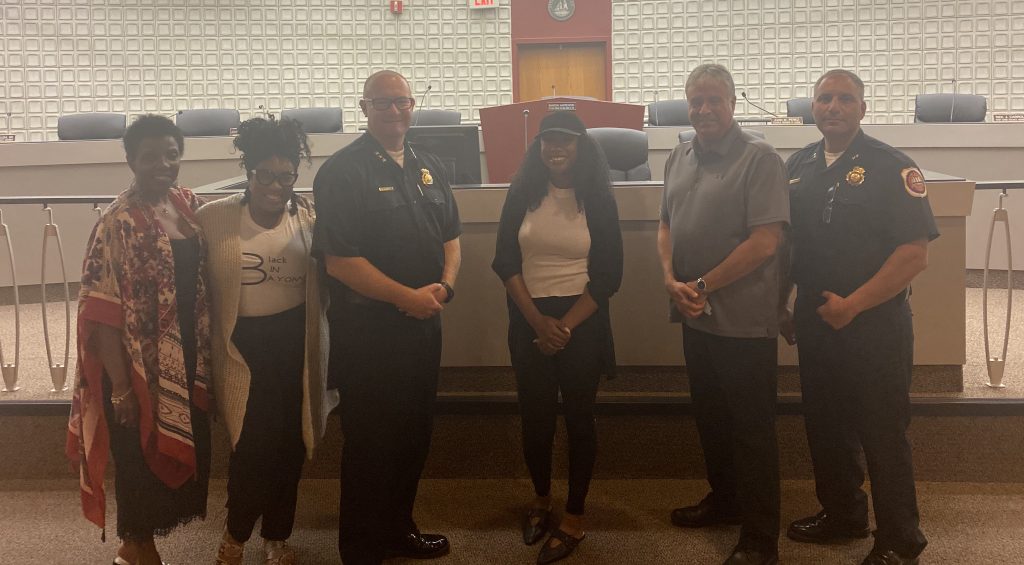 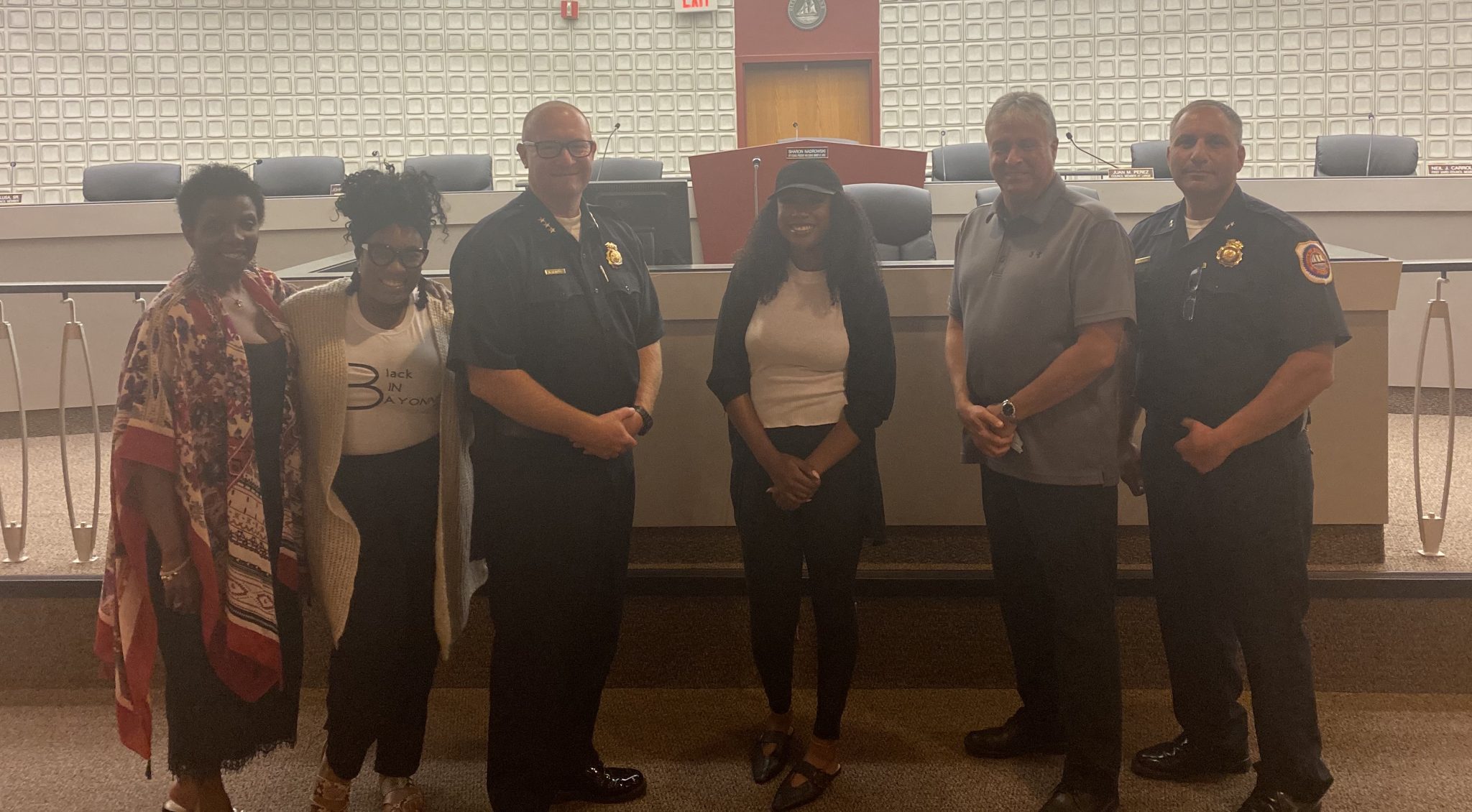 Black in Bayonne met at city hall with Jane Roberts from the local chapter of the NAACP, Mayor James Davis, Police Chief Robert Geisler, Assemblyman Nicholas Chiaravalloti, and other officials to discuss a number of issues regarding the Black community.

Black in Bayonne is a local black activist group founded by Camille High, Clarice High, Shaniqua Borders, and Rashad Callaway. Camille said that they have been activists for years, but not in their own city until they formed Black in Bayonne and organized the Power in the Park demonstration in honor of George Floyd.

Black in Bayonne has hosted a number of events in the city, including Power in the Park, the Juneteenth flag raising, and a candlelight vigil for Breonna Taylor and all women lost to violence.

On August 5, the group met with local officials to discuss issues affecting the Black community.

Jane Roberts, a teacher in Bayonne for more than 35 years and wife of former NAACP President Greg Roberts, called for the Black leaders of Bayonne to meet with city officials.

During the meeting they discussed a wide range of topics, from policing, to the racist Facebook comment calling for lynchings in the city.

A racist comment in a Bayonne Facebook group circulating on social media recently prompted a police investigation and city officials to respond.

The comment was posted on a video shared with the group Bayonne Talks Freely. Scott Guzzi posted an image of a lynching, featuring the text, “We need to start doing this again,” and the comment, “Time to Bring this back.”

The assistant prosecutor informed Black in Bayonne that criminal charges cannot be brought against the author of the Facebook comment because “it was not directed toward a certain person or group of people.”

Black in Bayonne discussed police protocols with Chief Geisler and how the police are policed. The group also asked for a rundown of the regulations that police follow during an arrest and how community relations can be improved.

“We would like the police to begin to address the stigma in the city which is people of color, specifically black people, aren’t welcome,” Black in Bayonne said in a statement. “Also begin to commit to changing the identity of the force.”

Based on the meeting, Black in Bayonne said that some of those things are being actively addressed.

“Police Chief Geisler and Mayor Jimmy Davis provided us with answers to all our questions in full detail,” according to Black in Bayonne.

Chief Geisler echoed the sentiment, noting the positive outcome of the meeting.

“On Wednesday I had the opportunity to meet with representatives of various Bayonne community groups to discuss recent bias events that have occurred in our community,” Geisler said. “It was an open, honest, and candid conversation.”

“As a result of this meeting, I was able to meet a number of new community members and re-engage with those individuals that I already know,” Geisler said. “I believe that our meeting was a success, and I look forward to more meetings in the future.”

Geisler said at the meeting that the current rates of police misconduct have gone down since the installation of body cameras and new training protocols.

The NAACP chapter of Bayonne provided the Bayonne Police Department with various tools to create better relations with the Black and Brown community.

Mayor Davis thanked everyone who participated and said he looked forward to continuing the dialog.

“We had a constructive meeting that brought together civilian public officials, Police Department leaders, and representatives of the Black community,” Davis said. “The meeting gave everyone the opportunity to express their concerns and to share their perspectives.”

Assemblyman Chiaravalloti called for the meetings to continue, noting that for true change to occur, everyone must be wiling to continue having uncomfortable conversations while creating better solutions.

Black in Bayonne looks forward to working with city officials to strengthen the relationship with the Black and Brown community of Bayonne.