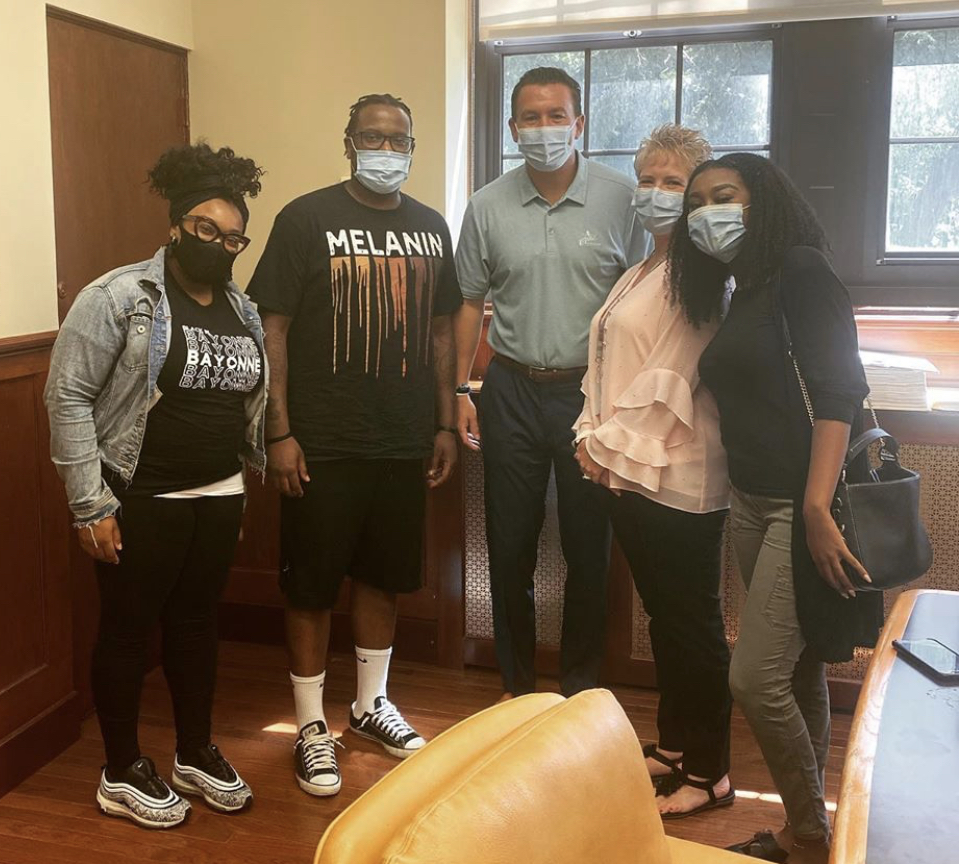 Black in Bayonne and school officials collaborated on August 11.
×

Black in Bayonne and school officials collaborated on August 11.

Board of Education officials recently met with Black in Bayonne regarding a number of issues brought to light at the June 29 board meeting.

Camille High led calls for more black educators in the city alongside Rev. Dorothy Patterson of Wallace Temple AME Zion Church. At the June meeting, Patterson highlighted the fact that there were only 19 black educators throughout the entire school district.

As a result of the exchange, Assistant Superintendent Kenneth Kopacz asked Black in Bayonne to meet with him and the Board of Education’s Comprehensive Equity Team.

Black in Bayonne initially met with school officials on July 14, discussing issues of employment inequality, climate and culture, and inclusivity in the Board of Education.

The group called for more opportunities for educators of color but also to hold existing employees accountable. Hiring black teachers doesn’t fix the deficiencies in classrooms run by white teachers, according to Black in Bayonne.

At the meeting, the group and school officials discussed providing teachers with necessary training to educate students of color, and amending policies and curricula that aren’t inclusive.

“So we’re not only addressing the fact we need more representation but also making sure that white folk either commit to being better educators and breaking down racial behavior, or they leave,” according to a statement by Black in Bayonne.

Goals for the school district

Black in Bayonne met with Kopacz and the Comprehensive Equity Team on August 11.

Black in Bayonne has a lot of concerns about the school district, stemming from calls for more black educators in the city. The group’s primary concern at the meeting was about the hiring process when it comes to people of color.

Black in Bayonne called for creating a culturally competent environment for students of color, training existing employees to be culturally competent, preparing the school district for new employees of color, developing programs for non-certified employees to move into certified positions, increasing the number of certified black staffers, addressing areas that are lacking in the curriculum, tackling the social and emotional issues that children of color face, and addressing issues of inequality and equity.

Assistant Superintendent Kopacz is committed to assisting Black in Bayonne in all of these areas.

Developments in the past month include several professional trainings on bias and diversity awareness from staff to staff, and staff to students, among other initiatives.

Becoming part of the process

Black in Bayonne was asked to be part of the recruitment process, which would offer employment positions to black educators in the Bayonne Board of Education.

“We thank Superintendent Kenneth Kopacz for his support and also not being an ‘ally based on proximity’ but an ally based on his actions,” according to Black in Bayonne.

Black in Bayonne is working on creating a platform for children to converse with police officers. In the upcoming months, the group plans to announce several other programs that will be implemented.