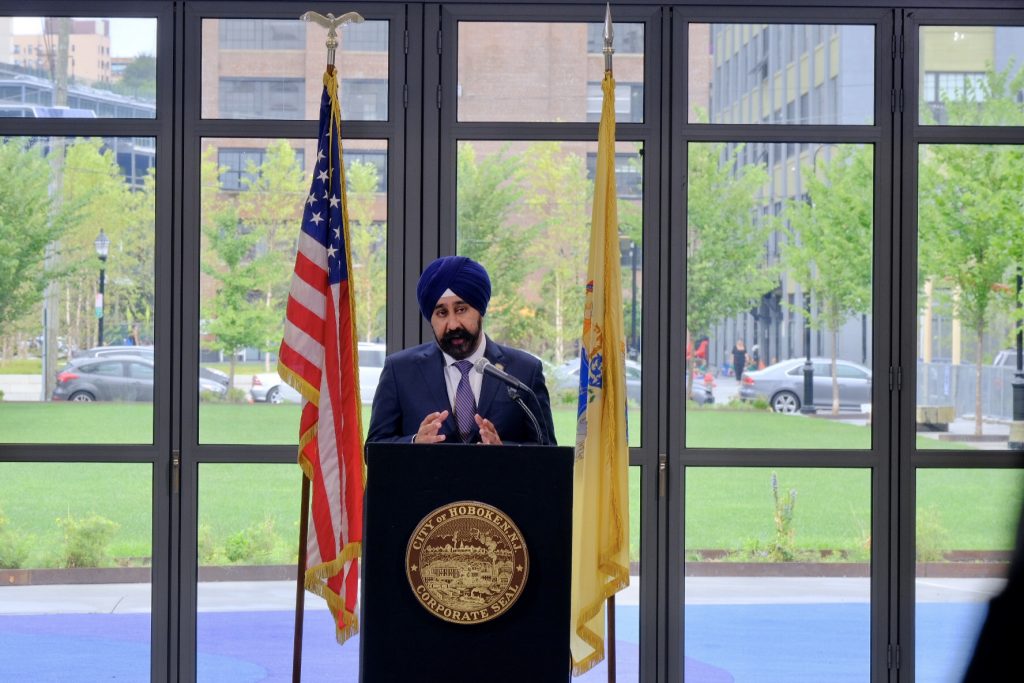 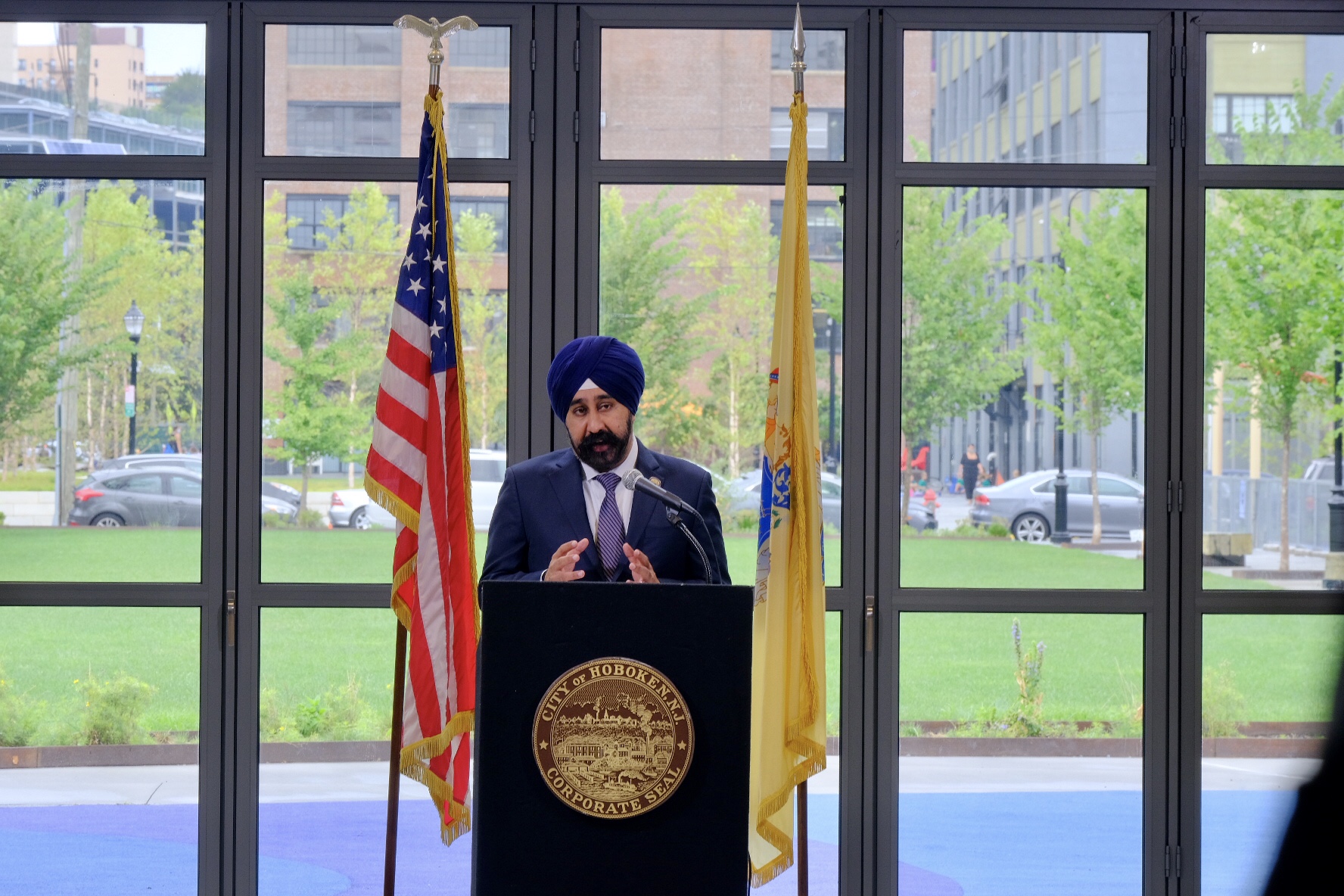 “We cannot stand idly by and allow Big Oil to continue profiting at the expense of Hoboken residents. It’s time these companies pay their fair share and be held accountable for their actions,” said Mayor Ravi Bhalla at a press conference on Sept. 2 announcing litigation against Exxon Mobil, Shell, BP, Chevron, Conoco Philips, and the American Petroleum Institute.

The 146-page suit, filed in Hudson County Superior Court on Sept. 2, seeks compensatory, punitive, consequential, and treble damages among other things from the defendants for a decades-long campaign of misinformation related to climate change and its impact on Hoboken.

The suit asserts that Hoboken has been disproportionately affected by climate change caused by fossil fuel companies’ products and that these companies invested millions of dollars in a campaign to deceive the public, despite their own scientists and trade groups stating that fossil fuels were causing climate change “with likely dire impacts.”

The suit alleges that the companies concealed the harms of fossil fuels from the public, orchestrated massive misinformation campaigns to discredit the valid climate science their own scientists had developed, and launched “greenwashing” campaigns to promote virtually nonexistent commitments to sustainable energy.

The suit seeks to compensate the city for past, current, and future costs associated with climate change adaptation, remediation, and economic losses.

The city alleges violations of the New Jersey Consumer Fraud Act, as well as claims for negligence and seeks common law remedies to prevent and abate hazards to public health, safety, welfare, and the environment.

“As a coastal community, Hoboken has directly felt the impacts of climate change, including rising sea levels and more frequent storms,” Bhalla said. “At the same time we’ve invested hundreds of millions of dollars adapting to the realities of climate change, Big Oil companies have engaged in a decades-long campaign of misinformation that has contributed to global warming which has disproportionately impacted our residents.”

According to the complaint, rising global temperatures as a result of climate change have contributed to nearly a foot of sea-level rise in and around Hoboken, a rate higher than almost all other regions in the world.

Hoboken is uniquely vulnerable to rising sea levels because more than half of its residents, schools, its hospital, and all its rail stations, ferry terminals, and hazardous waste sites are within five feet of its high tides.

This rising sea level “threatens Hoboken’s very existence,” according to the complaint and threatens the city with more frequent and severe flooding from storm surge during coastal storms.

In 2011, Hurricane Irene inundated thousands of properties and spilled raw sewage into the streets.

In 2012, Superstorm Sandy submerged Hoboken in 450 million gallons of storm surge, leaving 80 percent of the city under water and 20,000 residents stranded in their homes.

The devastating impact of Superstorm Sandy on Hoboken was due in part to higher sea elevation and storm intensification because of climate change, with a 14-foot storm surge causing more than $100 million in damage.

This summer, Hoboken residents witnessed firsthand the detrimental effects of climate change, with two extremely heavy rainstorms occurring in just two weeks, though each had less than a 10 percent chance of occurring in a given year.

As a result of climate change and rising sea levels, Hoboken and its partners have invested more than $140 million over the past decade to adapt to and mitigate flooding. This includes flood pumps, resiliency parks, underground flood storage, rain gardens, and the Rebuild By Design initiative.

The suit seeks to recover these funds and others to pay for the costs that the city is undertaking, and will undertake as a result of the impacts of climate change, exacerbated by these oil companies which, according to the complaint, accounted for more than  12 percent of global emissions between 1965 and 2017.

The mayor asserted that climate change is a racial justice issue, noting that Hoboken’s most vulnerable residents have borne the brunt of climate change’s negative impacts.

“Make no mistake about it, climate change is a racial justice issue in Hoboken and across cities everywhere,” Bhalla said. “Rising sea levels and more frequent storms have an outsized impact on low-income communities and communities of color, and we must do everything we can to address this trend. As a result, in partnership with the City Council, we are pledging that the first priority for any funds that may be recovered by the lawsuit will be to benefit residents in the HHA [Hoboken Housing Authority], to help sustain our most vulnerable communities for generations to come.”

“I remember almost like it was yesterday, the destruction that was caused by Superstorm Sandy and how the Hoboken Housing Authority, its buildings, and most importantly its residents took the brunt of that destruction,” said LaTrenda Ross, former co-chair of the Hoboken Rebuild by Design Community Advisory Group, and former resident of the HHA.

“Our communities should not have to worry about rain storms impacting their daily lives, let alone a superstorm that threatens the future of our city. I fully support Mayor Bhalla’s decision to take on the fossil fuel companies because for too long the residents of Hoboken and the Hoboken Housing Authority have been on the wrong end of the abuse of our climate.”

“The fossil fuel industry has been deliberately misleading the public and withholding information on their impact on climate change and the risks involved,” stated New Jersey Sierra Club Director Jeff Tittel. “It is critical that Hoboken is stepping up, especially now when hurricanes, wildfires, and more are getting worse, and severe impacts are becoming more expensive. Hoboken has spent hundreds of millions of dollars from Superstorm Sandy and creating resiliency and mitigation programs. Now they are going to court to hold those responsible for those damages.”

Executive Director of the New Jersey League of Conservation Voters Ed Potosnak said its time for “major polluting corporations” to be held responsible for the damage they caused.

“It’s exciting to see the city of Hoboken take the climate fight to the doorstep of the fossil fuel corporations who have caused the crisis we find ourselves in,” said Michael Watson of The Climate Mobilization, Hoboken Chapter. “These companies knew for decades that they were making our world uninhabitable, and they lied to the American people about it. Hurricane Sandy devastated our city, and it’s time that those responsible reimbursed Hoboken for the destruction they caused.”

Hoboken is the first city in New Jersey to file such a suit against big oil but joins at least 19 other cities, states, and counties across the country that have brought lawsuits against oil companies under different claims to recover billions of dollars in damages caused by the oil and gas industry’s deception about climate change.

Bhalla said the litigation could take years but “we owe it to the next generation of Hoboken residents, which could include our kids and grandkids,” noting that the litigation “could make a substantial impact on the future of Hoboken for years to come.”

According to the city, the litigation comes at no expense to the city or Hoboken taxpayers.

“If we don’t try to fight for what’s right now … we would be doing a disservice to everyone who comes after us in Hoboken,” Bhalla said.