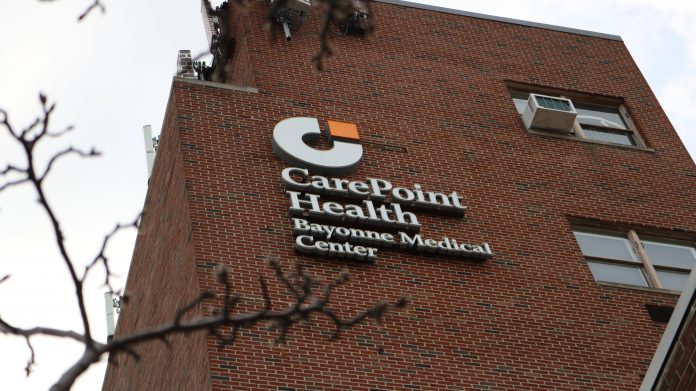 Bayonne Medical Center sits at the epicenter of the crisis.
×

Bayonne Medical Center sits at the epicenter of the crisis.

Amid the ongoing hospital crisis in Hudson County, another lawsuit may be in the works.

Avery Eisenreich, owner of nursing home operator Alaris Health, appears to be in the early stages of filing a lawsuit against the City of Bayonne and other municipalities involved in the ongoing hospital saga. Eisenreich is represented by Genova Burns LLC.

Genova Burns LLC has filed a tort claim against the City of Bayonne on behalf of their client. Filing a tort claim is usually among the first steps in suing public entities, such as city and county governments.

CarePoint Health is dissolving and has been liquidating its assets, including Bayonne Medical Center, Hoboken University Medical Center, and Christ Hospital in Jersey City.

Eisenreich purchased the land of BMC and Hoboken University Medical Center in November of 2019. CarePoint has been searching for an operator for the facilities ever since, eventually signing a formal sale agreement with BMC Hospital LLC to operate Bayonne Medical Center.

CarePoint has also signed a letter of intent with RWJBarnabas Health whereby that company would acquire operations at both Hoboken University Medical Center and Christ Hospital.

Meanwhile, Hudson Regional Hospital has closed on the purchase of the real estate of BMC for $76 million and is in contract with Eisenreich to acquire the Hoboken University Medical Center for $144 million.

The tort claim comes after officials from across the county, including Bayonne Mayor James Davis, have alleged that Eisenreich is holding up a deal where RWJBarnbas Health would acquire Christ Hospital and Hoboken University Medical Center from CarePoint.

Eisenreich faces allegations that he seeks to turn Bayonne Medical Center into a nursing home. He has repeatedly denied these claims in past lawsuits involving the hospitals.

The agenda from the Bayonne City Council meeting on Aug. 19 states that the tort claim alleges “false, public statements and violating constitutional rights.”

The tort claim alleges that city and county officials have been trying to discredit Eisenreich and that his reputation and business opportunities have been negatively affected.

The City of Bayonne does not comment on ongoing legal actions, according to a city spokesperson.

Similar tort claims have been filed against the City of Hoboken and the Hudson County governments. Eisenreich previously filed suit against Bayonne and Hoboken after both city councils adopted ordinances creating hospital districts around Bayonne Medical Center and Hoboken University Medical Center

In August, Davis wrote a letter to Gov. Phil Murphy, describing his frustration with the Department of Health’s process regarding applications to operate Bayonne Medical Center.

Recently, the NJ Department of Health rejected BMC Hospital LLC’s request for an expedited review of its application to operate BMC.

“The prolonged dispute over the facility is creating unnecessary instability within our health system and community — amidst the COVID-19 pandemic, no less,” Davis said. “Continued delay risks closure of the hospital (or many of its services/departments), flight of medical staff, loss of healthcare access and the elimination of hundreds of jobs. None of these outcomes are acceptable to the Bayonne community.”

In the letter, Davis reiterated his support for BMC Hospital LLC to operate Bayonne Medical Center.

Davis said the application from BMC Hospital LLC that is now before the department represents “the only viable and well thought out plan” for operation of the hospital, adding that the plan provides for the hospital’s “sustainability and growth.”

The letter made no mention of Hudson Regional Hospital’s plan.

“Based on their current plans, its strict focus on Bayonne Medical Center, and on the lack of a viable operational and financially stable alternative that could meet our community’s needs, we believe BMC Hospital LLC is that operator,” Davis said.

Searching for another solution

“Given the stakes, I would like to request your intervention to ensure timely resolution of this matter,” Davis said. “Our local health system and community deserve the proper attention and action to bring closure to this issue.”

Davis previously wrote to the NJ Department of Health, along with other local officials, pleading for state intervention, to no avail.

Meanwhile, the county has been working on its own solution to the crisis in support of BMC Hospital LLC.

In May, the Hudson County Board of Commissioners voted to approve three resolutions invoking eminent domain on the three CarePoint Health hospitals.

The Hudson County Improvement Authority (HCIA) has notified the property owners and operators of the three hospitals that an inspection of each facility will be conducted by the authority’s real estate appraisal experts, according to HCIA spokesperson Caitlin Mota.

With multiple lawsuits involving the hospitals, among other complicating factors, the crisis appears far from over.

Has Bayonne failed its Muslim community?