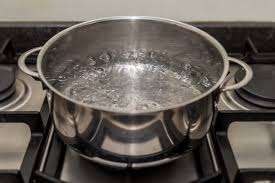 The presence of E. coli are bacteria indicates that the water may be contaminated with human or animal waste. Human pathogens in this waste can cause diarrhea, cramps, nausea, headaches, or other symptoms. They may pose a greater risk for infants, young children, the elderly, and people with compromised immune systems.

In August residents furiously posted about the boil-water advisory after Suez appeared to have waited three days between the initial positive test on Aug. 11 and informing the public on the evening of Aug. 14.

“WHY on earth R we finding this out in #jerseycity nearly 24 hours later?” tweeted a resident at Mayor Steven Fulop. “My husband has stage 4 cancer, I used tap water 2 wash all his food/veggies & fed it to him! What would U B saying if this was UR WIFE??? During global #COVID19 pandemic with stay at home orders 4 High Risk?”

According to testimony before the council at a caucus meeting on Sept. 8, Suez tests 2,300 samples per year in Jersey City, 1800 of which are Coliform bacteria samples that could indicate the presence of E. coli.

This year, there have been six coliform samples present, with one confirmed by resampling.

On Aug. 11 at noon Suez conducted 16 routine bacteriological samples. The following day, at 4 p.m. results showed that one sample at Christ Hospital was present for both Coliform and E. Coli.

At 4:30 p.m. on Aug 12 Suez sent a sampler to Christ Hospital to collect additional samples, both upstream and downstream.

At 8 p.m. on Aug. 13 Suez received the follow-up results, which indicated Christ Hospital tested negatively for Coliform and E.coli, as did upstream. But downstream showed the bacteria was present.

At 10:30 p.m. on Aug 13, Suez coordinated with NJDEP for the development of the advisory. NJDEP must approve the language.

Throughout the night, Suez flushed the water distribution system in the area.

On Aug. 14, at 10:22 a.m. the JCMUA released a boil-water advisory through Swift 911, instructing residents to boil water but did not inform them of the presence of E.coli or Coliform.

That morning, Suez collected 13 more samples. At 2:15 p.m. a final draft of the Boil Water Advisory was sent to the NJDEP and JCMUA for approval.

By 5:45 p.m. the advisory was approved and issued by Suez on social media with a press release issued to media, and test alerts issued at 6:20 p.m.

On Aug. 15 at 3:50 p.m. the samples came back negative for Coliform and E.coli. By 5 p.m. NJDEP approved ending the boil-water advisory.

At 6 p.m. Suez updated the public and the press via social media that the advisory was lifted.

“I was notified on Friday, and then I had a lot of angry residents thinking that we were trying to hide the ball from them, but that’s not the case at all,” said Ward D Councilman Yousef Saleh. “We notified them as soon as we found out.”

He added,  “I think that notifying the city officials should be the first step.”

“We have a lot of residents who are already anxious because of everything that seems to be happening in and around this pandemic,” said Ward B Councilwoman Mira Prinz-Arey. “There was no real, clear communication.”

Angelita Fasnacht, vice president of technical services for Suez, said there are five types of coliform, and retests were needed to rule out false positives before notifications could be issued.

asked why notifications did not explicitly say that E. coli had been detected on the morning of Aug. 14 but did later in the day.

Jason O’Brien, Suez vice president and general manager of the Northeast region environmental services division, said once tests were confirmed, Suez has to work with the DEP on the correct language in advisory, which takes time.

“The communication procedures by Suez followed the state and federal guidelines,” he said. “But what happened was the JCMUA wanted to take a proactive approach, out of an abundance of caution with the pandemic going on, and just do the reverse 911 that morning on the Friday.”

Executive Director of the JCMUA Jose Cunha said he decided to notify the public and issue a boil-water advisory to the entire city the morning of the Aug. 14 but “wasn’t at liberty” to share that E.coli was present in the water because Suez was waiting on DEP approval on the formal boil-water advisory.

“I knew full well that I was taking a bit of risk doing that,” said Cunha, noting that the city saved “quite a bit of time” by issuing a boil-water advisory that morning before the official advisory went out that evening.

“Could we have stated E.coli was present? We probably could, in hindsight, but at the time it would’ve been irresponsible until we received the official go-ahead from the DEP.”

The Suez officials said they were still investigating how E.coli got into the water, and they would work on speeding up the notification process.

O’Brien said he would work with the JCMUA and DEP on building standard notification templates which would only need some language changed for future notifications.