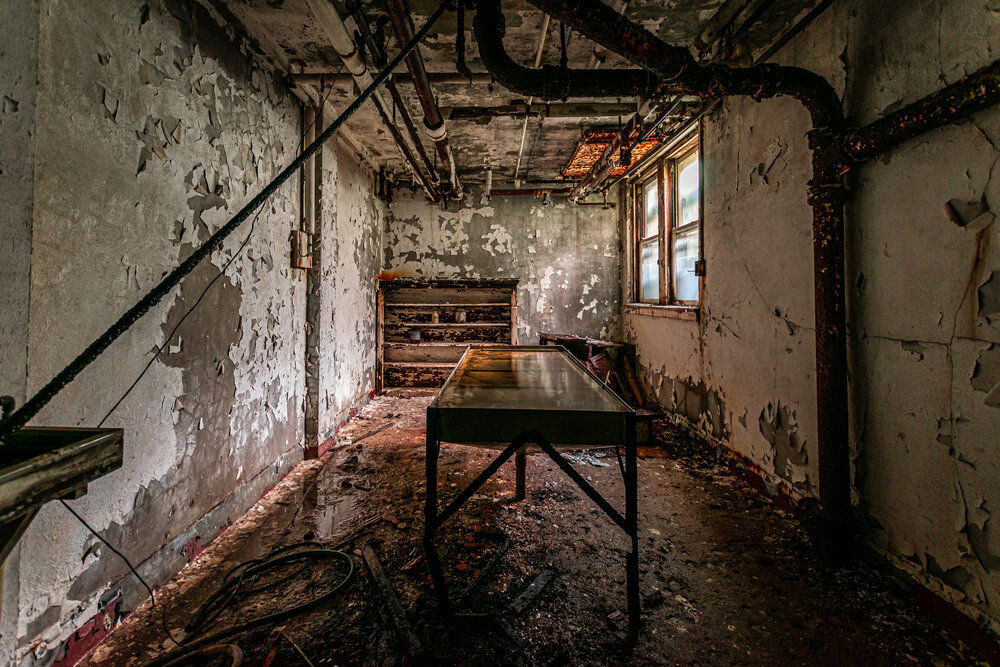 "The Morgue," by Alex Gulino.

Titled “Empire State of Decay: Discarded New York,” the book takes an inside look at abandoned buildings and decaying architecture across the state of New York.

“Funny enough, it started off with me looking for interesting things to do in New Jersey and in New York,” Gulino said. “I stumbled upon some videos on YouTube of urban exploration, which is defined as people who visit ruins or abandoned buildings. I found these explorers on YouTube, and they were going to all these abandoned places.”

Gulino continued: “I was watching these videos, and I was like that looks awesome. I want to do that.”

Eager to join the urban exploration community, she jumped right in doing her own research and trying to find abandoned sites near her.

At first, she took pictures with her phone in creepy, crumbling places in New Jersey and New York. Soon her phone became her camera.

“I guess it’s just curiosity,” she said. “It’s like you know, you ever drive down the street and see like that creepy house on the corner, and you’re like, ‘oh, that looks weird and that looks scary.’ And you’re like ‘I wonder what it looks like in there?’ and I think that’s what drew me in.”

Gulino said it’s crazy to see these structures just sitting there with no one tending to them.

“Once upon a time, these were places that were celebrated or they were educational facilities, and now they’re just sitting there, rotting away,” Gulino said. “And to me, that’s just fascinating.”

“I don’t recommend this for the the weak of heart. Structures can be sketchy, and so there’s a lot of times [in the book] you’ll see us testing out the floor before we fully walk into a new room.”

Gulino said sometimes there are rusted nails, broken glass, and floors that aren’t particularly stable, so she has to be cautious. One time she fell through the floor.

Her number-one rule is to never go anyplace alone.

“In Pennsylvania, I went to a church which I didn’t think I could access,” Gulino said. “I got in there, and this guy came out of nowhere, like literally from the shadows. He was like, ‘Oh hey, are you here to feed the cats?’ I almost dropped dead.”

The man was not the owner of the church and harmless, but the encounter was creepy nonetheless. Her companion was trying to get them out of there.

“It takes a quite a bit of research to find places,” Gulino said. “Ideally you want to find places that still have some kind of artifacts left behind. So if you’re gonna go visit an old hospital, you’re hoping to see a wheelchair or some kind of  X-Ray machine or something like that.”

First she must determine if the structure is accessible and can be entered. Then she tries to get permission before entering and snapping pictures of whatever catches her eye.

“Sometimes it could be nothing, it could just be a broken window, and it just looked like art to me,” she said.

While there’s a lot of research involved, there’s an entire urban-exploration community willing to help.

“You could say, ‘I found this really interesting um hospital, what can you tell me about it?’ or ‘Have you been there?’ What’s there to watch out for?,'” Gulino said.

Her book features only photographs from New York, but Gulino has taken many photos in New Jersey, including in Hudson County.

“There was a church which is now being converted into apartments,” she said. “It was a church in Jersey City that’s absolutely gorgeous. It had beautiful colors like these pastels of pink and light blue and yellows. There were no pews left, but it was a beautiful church to see.”

After seeing her photo’s on Instagram, a publisher reached out to Gulino and offered her the opportunity to write a book.

She was initially skeptical, thinking the offer was a scam. But upon further investigation, she determined it was the real deal.

“You can get hurt doing this,” she said. “Definitely bring a friend or two with you in case anything comes up. Always let someone know where you are.”

The book is available at Barnes & Noble and Amazon.

Gulino is having a book signing on Sept. 20 from 1 to 4 p.m. at The Little BOHO Bookshop at 164 Broadway in Bayonne.