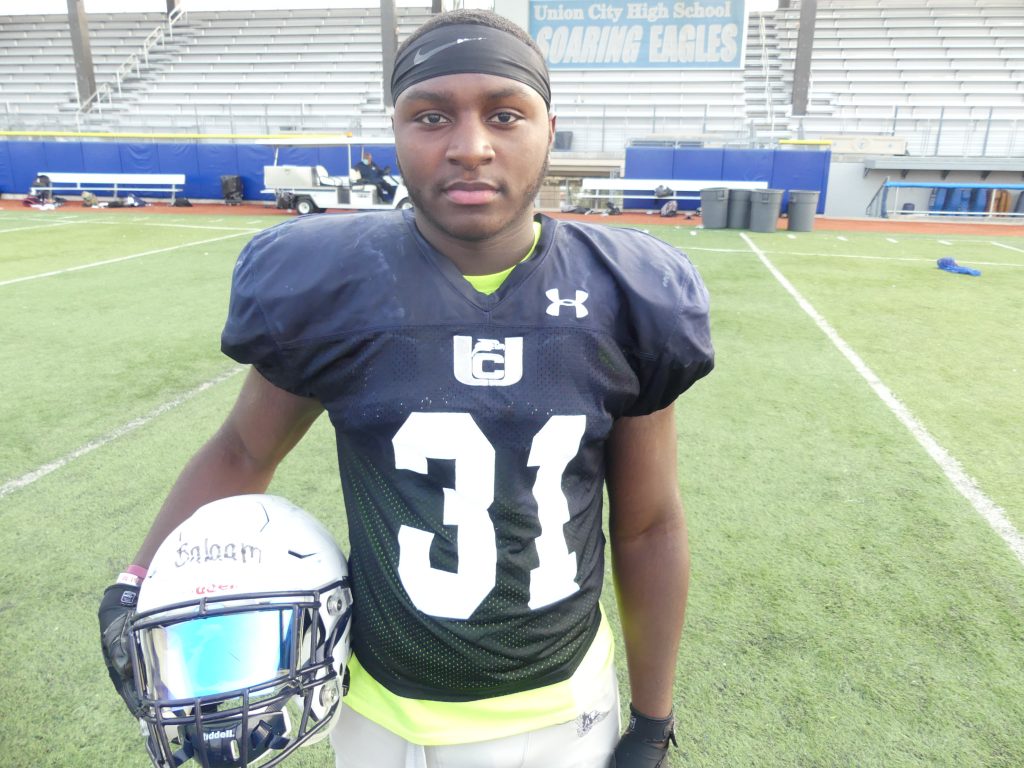 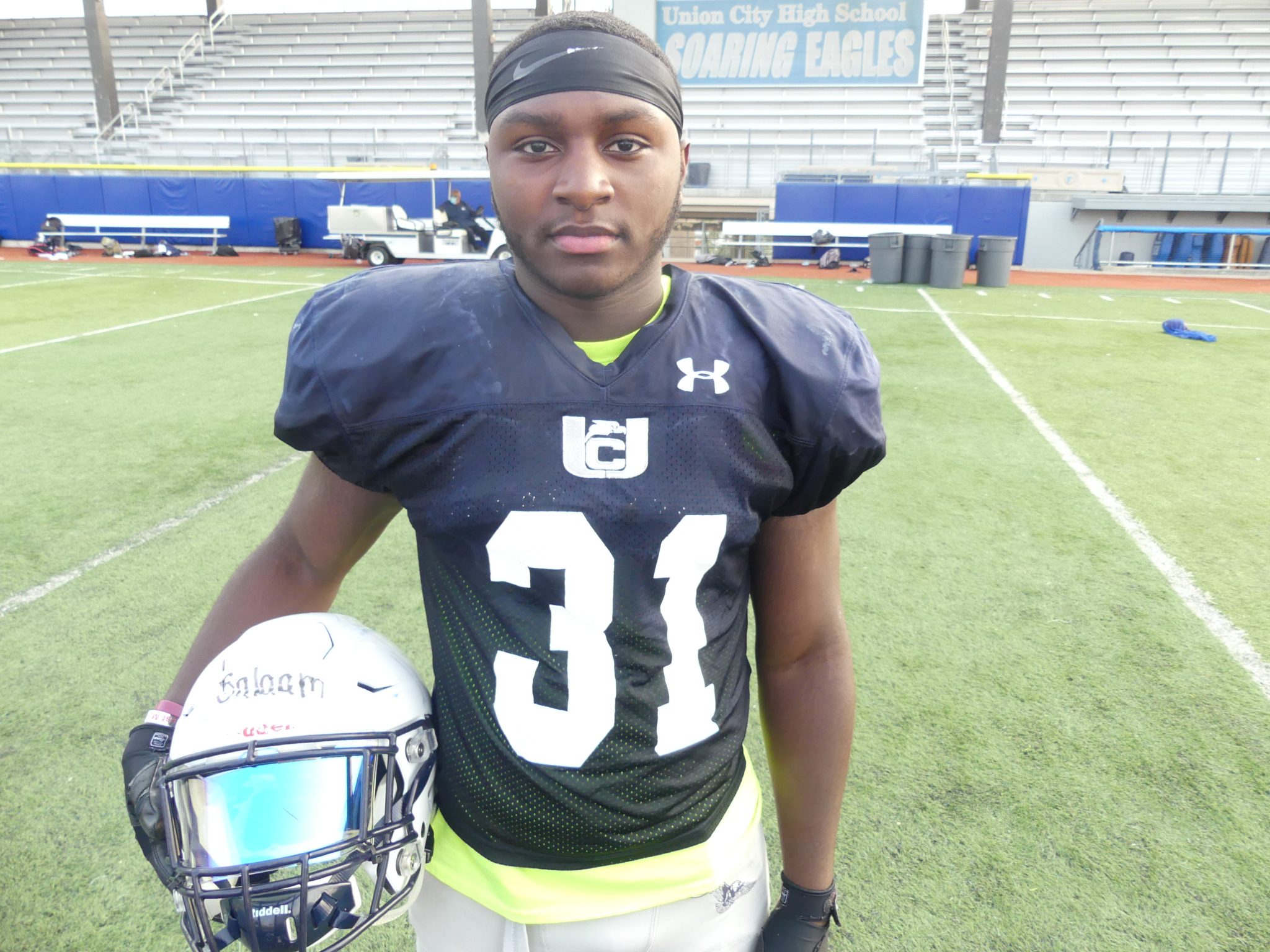 Zahir Abdus-Salaam has no idea the origins of his nickname, which is now more readily how he is recognized in his new hometown of Union City than the moniker on his birth certificate.

But Abdus-Salaam has been known for the majority of his life as “Oldie.”

“I don’t know where it came from,” said Abdus-Salaam, a senior running back on the undefeated Soaring Eagles football squad, a group that is truly living up to their name as Soaring Eagles. After wins of 56-7 over Newark East Side and a stunning thrashing of neighboring rival North Bergen by a final score of 70-3, Union City is truly soaring.

“When I was young, my father [Muhamad] said that I had an old man’s mentality,” Abdus-Salaam said. “He said that I walked and acted like an old man. I was about four years old. I really didn’t care. It stuck. I didn’t care. I kind of like it now. My teammates can call me ‘Oldie.’”

But Salaam is hardly an “oldie.”

As a youngster, Abdus-Salaam certainly didn’t move that way in the ring, when he was boxing on the Junior Gloves and Diamond Gloves circuit, under the tutelage of his father, Muhamad Abdus-Salaam, who has trained some of the best amateur and professional boxers in New Jersey over the last 20 years. The elder Salaam has his gym in Passaic.

“I worked out every day with my father,” Abdus-Salaam said. “I’ve been boxing all the way up in my life.”

Abdus-Salaam has experienced winning in the ring for most of his young life as well.

Abdus-Salaam’s most recent fights were competing in the 138-pound class (Hungary) where he won the Junior Olympics bronze medal and the 145-pound class (Ireland) where he took home the gold medal.

“I was kind of small,” Abdus-Salaam said.

But Abdus-Salaam admits in his heart that he is always a fighter first.

“I have the love of boxing first,” Abdus-Salaam said. “But I knew that I had to eventually go to college. I planned on using football to get to college. Boxing was always my sport.”

In 2020, Abdus-Salaam knew that he had to put boxing on the backburner. He was entering his senior year at Union City and had to make a positive impression with the college recruiters in order to secure a scholarship.

Abdus-Salaam’s older brother Muadh Abdus-Salaam was able to secure a scholarship to play football at Delaware State University in 2017.

“I saw my brother play at the D-I [NCAA Division I] level and I knew I wanted to do this,” Abdus-Salaam said of Muadh, who currently plays linebacker and strong safety at Delaware State, which has put a hold on its program due to the coronavirus COVID-19 pandemic. “I knew that’s what I wanted to do. If I could go to college for free because of football, then that was my goal. I always wanted to go to college anyway.”

Abdus-Salaam first resided in Irvington and played football there for two years. But when the family moved to Union City, Abdus-Salaam embraced his new home.

At least Abdus-Salaam was familiar with the new surroundings. Union City head football coach Wilber Valdez has known the younger Abdus-Salaam through his father since he was a youngster.

So when the younger Abdus-Salaam decided to attend high school in his new hometown, Valdez was more than pleased.

“I knew what he could do,” Valdez said. “I knew you had to be a good athlete to get inside the ring. He had that toughness that you need, competing in a sport where the only person you can count on is yourself. I was impressed that he woke up every morning at 6 a.m. to train and sometimes he wasn’t able to eat [because of the Muslim faith and many stints of fasting that come with the faith]. I knew that his mental toughness would help him on the football field.”

But it didn’t take long for Valdez to realize how truly special an athlete Abdus-Salaam is.

“He bought in right away into what we want to do with football,” Valdez said. “He understood the type of program we have and what kind of coach I am. He understood the discipline and structure we have. But I also knew the kind of potential he had.”

Abdus-Salaam wanted to make sure that he ended his career in Union City with a bang.

“It’s my senior year and I wanted to make the most of it,” Abdus-Salaam said. “I didn’t quarantine for no reason.”

The 2020 season was delayed for a month due to the COVID-19 crisis, so when the season began, Abdus-Salaam was more than ready.

In the season opener against Newark East Side, Valdez had only five carries for 100 yards, but four of those attempts went for touchdowns. The Soaring Eagles won the game, 56-7.

Last week, it was more of the same, but this time it came at the hands of neighboring rival North Bergen in the game dubbed “The Battle of the Boulevard.”

As it turned out, the contest wasn’t much of a battle, thanks to Abdus-Salaam.

The talented senior carried the ball five times for 101 yards and scored two touchdowns on the ground. Abdus-Salaam also ran one reception for a 50-yard TD and returned a kickoff and an interception for touchdowns.

It means that Abdus-Salaam has just simply touched the ball 13 times this season – and scored touchdowns on nine of those 13 tries. That’s just truly unbelievable.

But the boxer/running back isn’t satisfied.

“I know I could do better,” Abdus-Salaam said. “I know 10 touchdowns are way better than nine. There are little things I worry about. Instead of 100 yards, I could have had 170 yards. Things like that. I’m super hard on myself. I could be a better defensive player. Sometimes I get lazy on defense.”

That must drive Valdez out of his mind. Same for Muhamad Abdus-Salaam.

“I hear it from both of them,” Abdus-Salaam said. “It’s OK. I know that they’re both crazy.”

For his efforts this season, Abdus-Salaam has been selected as The Hudson Reporter Athlete of the Week for the past week. He’s the first such honoree in the 2020-2021 scholastic sports season. Abdus-Salaam also earned the honors almost exactly a year ago, taking home the AOW honor on Oct. 11, 2009. (Check link below to see last year’s feature).

Abdus-Salaam has already attained his goal of a college scholarship. He’s already given Western Michigan University a verbal commitment and might just sign his letter of intent in December when prospective college athletes can officially sign letters.

Salaam is also an excellent student, maintaining a 3.8 grade point average. He plans on studying physical therapy or sports medicine in college.

So things are good up on the roof of Union City High. As long as the boxer known as “Oldie” has the ball in his hands.

“I guess I’ve played pretty well,” Abdus-Salaam said of his early explosion. “I just go out and play.”

Doesn’t get any better than that. – Jim Hague

ATHLETE OF THE WEEK UC’s Abdus-Salaam is a true ‘Oldie’ but goody in boxing, football