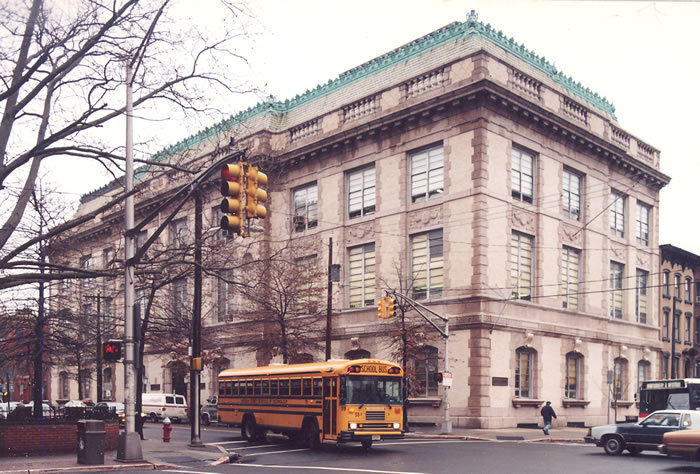 Jersey City's 115-year-old Main Library will undergo another phase of renovation thanks to a state award of $5 million.
×

Jersey City's 115-year-old Main Library will undergo another phase of renovation thanks to a state award of $5 million.

The New Jersey State Legislature will fund the rehabilitation of Jersey City’s historic Main Library, the largest city library in the state, with $5 million from the Library Construction Bond Act, according to Mayor Steven Fulop and the Jersey City Free Public Library.

The city will match the funding to complete the renovations.

“Our residents are relying on city services more than ever before due to the pandemic, and as one of the largest library systems in the state, we are always looking to expand access to community-focused educational, cultural, and employment resources that the library provides, ” Fulop said. “I’m thankful to our state delegation who fought for our library, which is a cornerstone of our diverse community.”

The first three phases of the much-needed renovations began in 2014 to restore and update the building at 472 Jersey Ave. nearly 115 years after the library opened.

The project includes a variety of tech-infused and state-of-the-art meeting rooms that can be reserved by the public, including a 20-seat classroom, a 28-seat community room, and a 60-seat multipurpose room on the first floor.

Plans call for improvements to the main hallways that will allow for community art and visiting exhibitions.

“We are very excited that we will be able to complete this rehabilitation of the Main Library and bring more public space to the building,” said Library Director Jeffrey Trzeciak. “This final phase will bring our library into the 21st century and really make it a destination space.”

He continued, “I want to thank the voters who supported the bond, as well as the City of Jersey City and Mayor Fulop for their longstanding support of the renovation project. I am also grateful to our architect, Helena Ruman, who worked with me on the proposal, and Patty Anderson, who assisted me in writing and submitting the grant this summer.”

Library Board President Curt Harris said he and the board were “ thrilled to hear the news” and thanked the director. “It was his hard work and vision tha made this a reality,” Harris said.

Assemblyman Nicholas Chiaravalloti said the funding “illustrates strong support to the community especially as we face these challenging times.

“Our libraries provide invaluable resources to our residents, opening doors to countless opportunities while encouraging education and growth,” he said. “This funding furthers our goal to create a safe community space that encourages everyone to achieve their full potential.”

The Library Construction Bond Act, approved by voters in November 2017, authorized $125 million to fund critical improvements to the state’s public libraries. The JCFPL was among the top ten largest projects of the 129 applications reviewed by a committee of experts from various state agencies.

The governor recommended only one-third of applications.

“Public libraries bolster quality of life and stability in urban communities,” said Assemblyman Raj Mukherji. “I thank the governor, the state librarian, and Dr. Hancock of Thomas Edison State University for recommending this $5 million award, which will help our libraries realize Mayor Fulop’s vision of modernization and enhanced value in the 21st century.”

“Now, more than ever, with so much misinformation circulating, we need to support our libraries and other public learning centers throughout the state. It is very encouraging that the governor has selected two of our libraries in Hudson County to receive this much-needed funding for critical improvements and projects that will serve our youth, adults, and seniors who use our libraries in Jersey City and Bayonne.”

The state approved the library funding after Fulop announced plans to build a brand-new library branch within one of Jersey City’s public housing sites to expand residents’ access to critical resources.

In September Trzeciak also announced plans for a proposed new library branch on Johnston Avenue which would include a public meeting space, a maker space with 3-D printing and virtual reality programs, a recording studio, a public gallery, a design studio, meeting spaces, and traditional library space for books.

The city recently partnered with the JCFPL to launch a data dashboard that tracks circulation and electronic resource usage to monitor public data to support the community’s needs.

Members of the community can attend a virtual town hall on Wednesday, Nov. 18 at 1 p.m. or 6 p.m. to give feedback on the renovations.

Questions can be submitted in advance at hello@jclibrary.org,

All registrants will receive a recording.