During his COVID-19 update on Dec. 4, Governor Phil Murphy said photos of the gala show that attendees did not follow indoor mask mandates instituted by executive order due to the COVID-19 pandemic.
×

During his COVID-19 update on Dec. 4, Governor Phil Murphy said photos of the gala show that attendees did not follow indoor mask mandates instituted by executive order due to the COVID-19 pandemic.

Jersey City officials have ordered Maritime Parc restaurant to close temporarily after it was the site of a gala hosted by New York Republicans that allegedly violated New Jersey’s COVID-19 guidelines.

“This establishment known as Maritime Parc, 84 Audrey Zapp Dr., has been ordered CLOSED until such time as the operators prepare and submit a written operational plan to the Jersey City Department of Environmental Health, describing how they intend to comply with Gov. Phil Murphy’s Executive orders (E.O.’s 183, 192, and 194 specifically) regarding capacity mandates and mask wearing,” states a Dec. 4 administrative order signed by James Boo, director of the city’s Division of Environmental Health. “Failure to comply will lead to fines and court appearances.”

According to the above-cited executive orders, the number of patrons in indoor areas must be limited to 25 percent of the food or beverage establishment’s indoor capacity and never more than 150 people. Tables must be placed six feet apart, and patrons must wear face coverings while inside the establishment and while seated at their tables until their food or drinks arrive. These face coverings must be put back on after the individuals have finished consuming their food or drinks.

According to the NYYRC website, the 108th annual gala included a keynote address by James O’Keefe of Project Veritas, special guest Florida Rep. Matt Gaetz, as well as a cocktail reception followed by an awards ceremony, State of the Club address, a three-course seated dinner, and premium open bar.

The website stated that attendees’ temperatures would be checked before entering the venue.

Photos and videos allegedly of the gathering on social media show attendees maskless and not practicing social distancing with captions like “Catch us if you can, Commie Cuomo,” “We are having a ball here!” and “Uh oh. The Rona got loose.”

Attendee Joel Fischer tweeted a selfie with Gaetz at New York Governor Andrew Cuomo (D), captioned “come and get me,” to the ire of Jersey City Mayor Steven Fulop.

“So brave of you to tweet at @NYGovCuomo after sneaking across the river to hide in NJ in order to hold a party that you wouldn’t disclose the location of,” said Fulop in a tweet. “Nevertheless JC law enforcement will be visiting the Maritime Parc… [and] will follow appropriate steps within laws of NJ.”

Fulop wasn’t the only one to admonish the event.  Gov. Phil Murphy said the attendees and Gaetz should be “ashamed of themselves” during his streamed COVID-19 update on Dec. 4.

“Last night, the @NYYRC allegedly snuck into Jersey City to hold a ‘gala fundraiser’ – ignoring our social distancing and mask rules,” tweeted Murphy. “It is beyond the pale that anyone would willingly endanger people in another state.”

He further stated that Gaetz, a supporter of President Trump, was no longer welcome in New Jersey.

“It is also beyond the pale that Rep Matt Putz – I mean @RepMattGaetz– would participate in this,” he tweeted. “What a fool. Matt – You are not welcome in New Jersey, and frankly I don’t ever want you back in this state.”

Gaetz responded with his own barbs at the governor.

“You’re gonna regret this tweet when you move to Florida like the rest of New Jersey,” he tweeted as well as “Dear Business Owners – Escape the Tyrany. Move to Florida.”

But, President of the NYYRC Gavin Wax said no laws were broken.

“The @NYYRC Gala was held in full compliance with all applicable laws and regulations,” he tweeted. “Any suggestion to the contrary and any legal threats are made in bad faith and politically motivated. As far as we are aware, the First Amendment has not been repealed.” 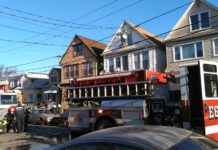 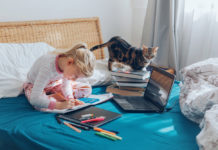 Hoboken man is at it again