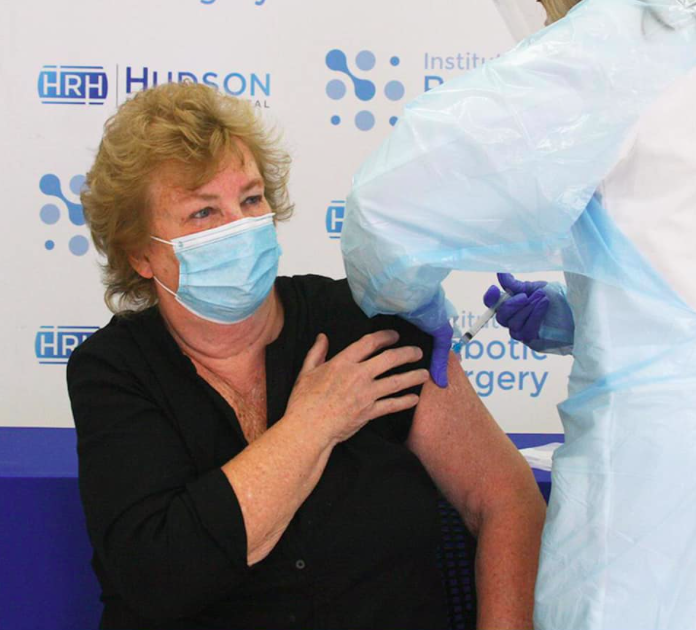 On Dec. 22, Karen Christie, an ICU nurse, became the first HRH employee to be vaccinated.
×

On Dec. 22, Karen Christie, an ICU nurse, became the first HRH employee to be vaccinated.

COVID-19 vaccines have arrived at hospitals throughout Hudson County. As frontline healthcare workers receive the vaccine under Phase 1A of distribution, Hudson Regional Hospital in Secaucus looks to become the second vaccine distribution center for the county.

In an interview with the Hudson Reporter, CEO and President of Hudson Regional Hospital Dr. Nizar Kifaieh discussed how the hospital is coping with the surge and distributing the vaccine.

Rolling up their sleeves

The hospital received 100 doses of the Moderna vaccine on Dec. 21 and began administering it to staff the next morning. Kifaieh said the hospital began with employees in the high-risk category, which includes personnel who interact the most with patients infected with COVID-19. The selection of employees was limited due to the short supply of doses.

Kifaieh took the vaccine on Dec. 22. He is considered high-risk because he frequently treats patients in the Emergency Department and Intensive Care Unit.

“I wanted to lead by example because a lot of people are reluctant to take the vaccine,” Kifaieh said. “There’s a lot of confusion and or ambiguity out there about the effectiveness of this vaccination, so we wanted to cut through all of that and just take it and show everybody that if we’re taking it, you should consider it too.”

Currently, the distribution is in Phase 1A. The next phase, Phase 1B, includes first responders, such as police and firefighters, other frontline essential workers, and vulnerable members of the community. Phase 1C includes all other essential workers. Phase 2 will include the general population.

Kifaieh said the hospital received 200 more doses on Dec. 23. He said he was relieved at the additional shipment because the initial supply of 100 doses would not have lasted until the end of the week because 30 employees were vaccinated on the first day.

Hudson Regional Hospital will be a point of distribution for Secaucus residents. However, the town estimates that residents won’t be able to receive the vaccine until the start of Phase 2 around late January.

The hospital is working with the Hudson County Executive’s Office to become a countywide point of distribution for the vaccine. Currently, Hudson Regional Hospital serves as the county COVID-19 testing site.

While the county has opened a vaccine distribution center in Kearny, another site in Secaucus would benefit the community.

According to Kifaieh, vaccinating everyone in the community will take some time. Prior to vaccinating staff at Hudson Regional Hospital, a survey was sent regarding whether staff wanted to take the vaccine. Somewhat surprisingly, Kifaieh said, a good number of employees did not want to take it.

“I think a lot of people are watching, just sitting back and watching to see how others are responding to it and that the potential side effects are not dangerous,” Kifaieh said.

According to Kifaieh, Hudson Regional Hospital has been coping with an influx of virus patients. He said that recently the hospital has been averaging anywhere from 12 to 20 patients a day. But patients are doing well, and there have been only one or two deaths since the current surge began.

Kifaieh added that patients are not as sick as they were in March and April. While some COVID-19 patients come down with a severe case, most are not getting as sick and are recovering quicker at the hospital. According to Kifaieh, this is due to a better approach to treatment, and vulnerable people exercising more safety precautions.

The current surge can be attributed to Thanksgiving gatherings as well as an increase in testing before the holidays. Kifaieh said that Christmas and New Year’s Eve celebrations will yield an increase in cases.

According to Kifaieh, the hospital is preparing for another uptick in admissions and has been allocating resources to accommodate an influx of virus patients.