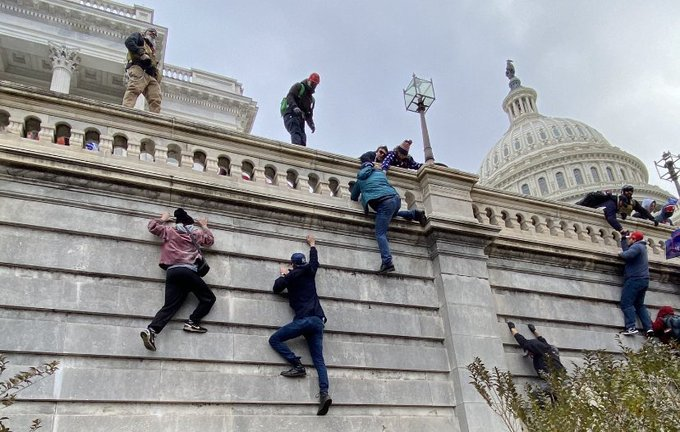 As Trump supporters storm the U.S. Capitol Building in Washington D.C. to stop the counting of the Electoral College votes for the 2020 Presidential Election during a joint session of Congress, local Hudson County representatives react to the chaos.

Rep. Albio Sires represents the 8th Congressional District of New Jersey, including most of Hudson County. Prior to the mob attack, Sires condemned the Republican effort to overturn the election by rejecting the certified electors from certain states.

“What we are seeing is members of the GOP trying to dismiss the legitimate votes of millions of Americans, and subvert democracy,” Sires said on Twitter. “These are not the actions of democratic leaders, but of autocrats.”

He continued: “I know our institutions are strong enough to withstand these attacks, and it is all too clear that we must pass democratic reforms to ensure the erosion of our norms and democratic processes does not happen again.”

Following the breach of the Capitol Building, Sires said that he was locked down on the floor of the House Chamber.

“Debate has resumed,” Sires said. “I and other members who were on the floor were addressed by Capitol Police and locked down in the Chamber because security at the Capitol has been breached.”

Shortly after, Sires said that the House had gone back into recess.

He continued: “The violence and lawlessness of rioters at the Capitol right now is one of the gravest assaults on our democracy in memory. If this was happening in any other country we would be calling it a coup attempt.”

Sires said he and his staff are now safe and grateful for the protection of the Capitol Police.

“While we watch the Republican Sedition Caucus try to burn down democracy, just outside us rioting rightwing mobs are attacking police trying to storm the Capitol,” Pascrell Jr. said on Twitter. “These extremists are egged on by Trump and Republicans’ coup attempt. This is fascism.”

He continued: “Every American should watch what is happening on the steps of the Capitol as rightwing mobs attack police while here inside Republicans try to overturn the election. The two are complementary attacks on democracy. Thank you to brave Capitol Police for keeping all of us safe.”

Following the breach of the Capitol Building, Pascrell Jr. managed to safely escape the chaos.

“I was on the floor but I am safe with my brave staff,” Pascrell Jr. said. “What we are witnessing is an attempted coup directly incited by the criminal in the White House. It will fail.”

Following that, Pascrell Jr. released a statement further condemning the siege of the Capitol Building.

“This attempted coup is treasonous,” Pascrell Jr said. “It was incited directly by Donald Trump and some Congressional Republicans. When he leaves office Trump must be prosecuted for his crimes, perhaps including his incitement to violence. If the Defense Department blocked the deployment of the National Guard, any one responsible for that must be held accountable and possibly arrested.”

He continued: “To all the Trump sycophants that followed in his footsteps, to all my Republican colleagues I say this: once the fascist genie has been let out of the bottle, he can’t be forced back in. Violent fascism at the footsteps of our national legislature was fed by Republicans and years of fomenting extremism against our government. They built this. This authoritarianism will not disappear in 14 days. I have been calling for accountability for four years. It cannot be ignored any longer. The long-term preservation of democracy is in our hands right now. It is the challenge of our time to eradicate this poison starting now.”

Rep. Payne Jr. represents the 10th Congressional District of New Jersey, including parts of Jersey City and Bayonne. Payne Jr. was at home, “safe and away from this chaos.”

“But this is a sad, sad day for America,” Payne Jr. said. “Every American who loves this country should be horrified and ashamed about what is happening right now.”

Sen. Cory Booker announced he and his staff are safe after the breach.

“It’s disgraceful that Trump and his allies have enabled this violence and attacks on our democracy,” Booker said. “Grateful to the Capitol Police for keeping us safe.”

Sen. Bob Menendez also said he and his staff are safe and following guidance from Capitol Police.

“The scene in the Capitol goes against every value we pledge to uphold as a nation,” Menendez said. “Democracy will prevail.”