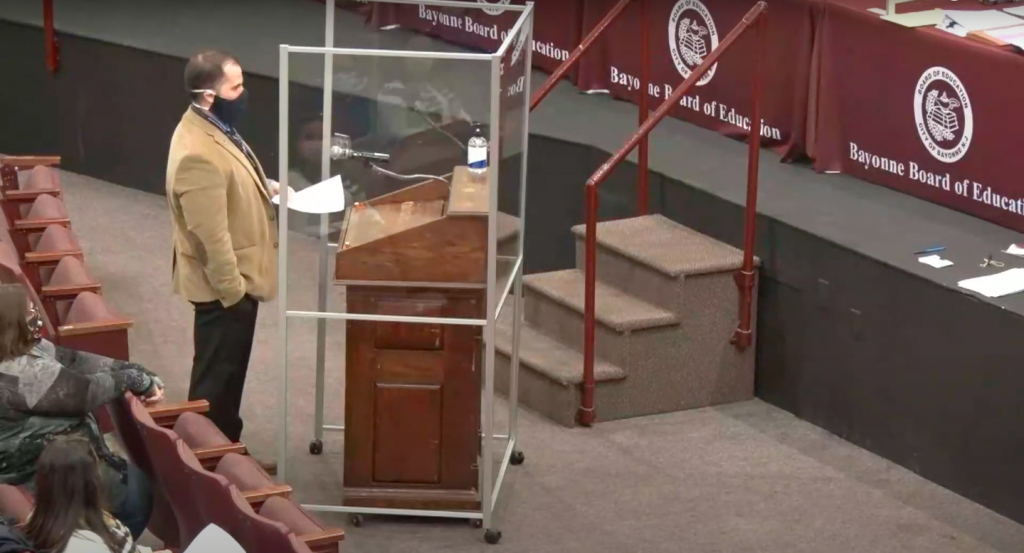 Gene Woods, president of the Bayonne Education Association, defends virtual instruction at the Feb. 24 Bayonne Board of Education meeting.
× 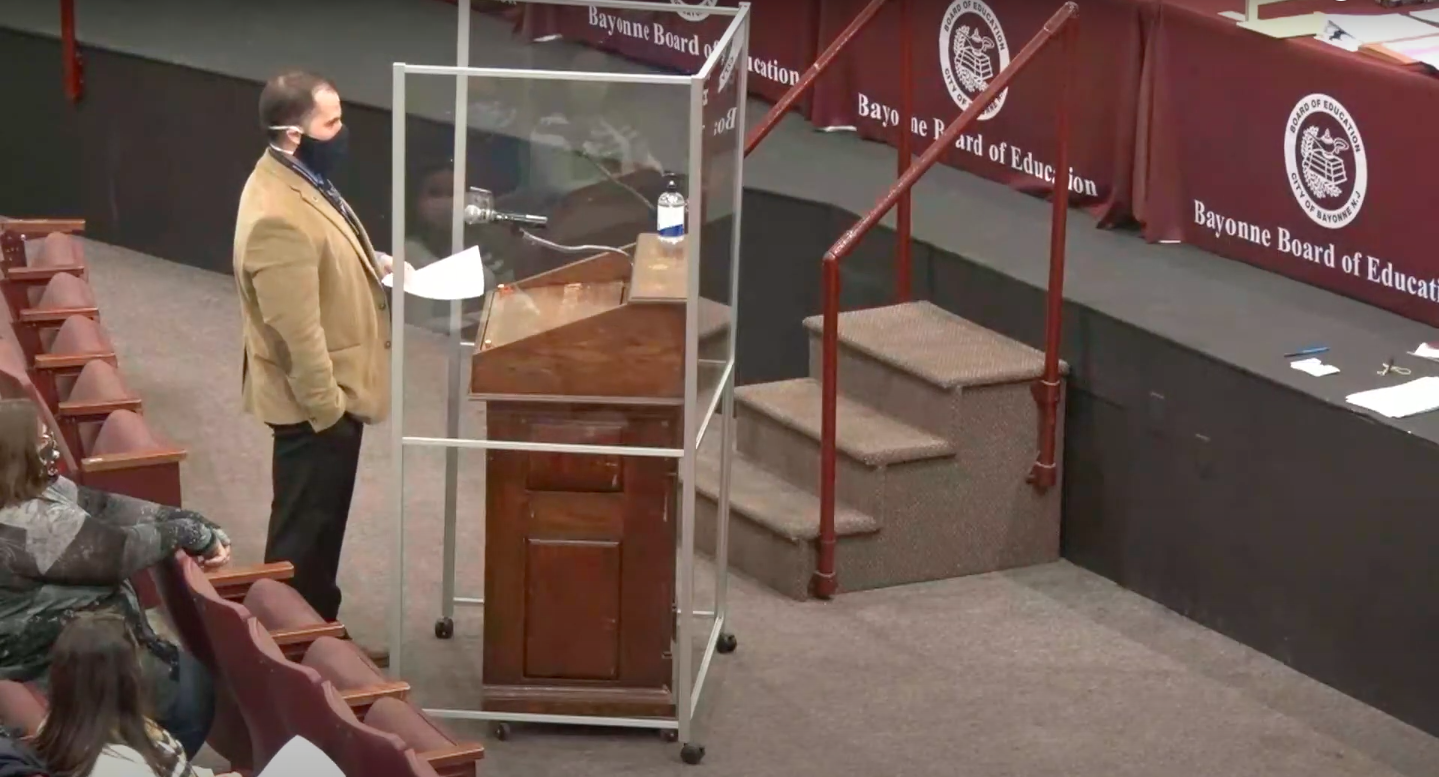 Gene Woods, president of the Bayonne Education Association, defends virtual instruction at the Feb. 24 Bayonne Board of Education meeting.

A number of parents called for students to return to classrooms under hybrid or in-person instruction at the Feb. 23 Bayonne Board of Education meeting.

Superintendent of Schools John Niesz recently announced the district will remain virtual into March, when it will reevaluate its instruction plan. The district is planning for a possible transition to hybrid instruction.

Two schools shut down after two staff members contracted the virus, even while operating remotely. Niesz said that sports programs haven’t gone one week without a COVID-19 infection.

Niesz said that schools are not prepared to safely reopen, virtual instruction is the safest solution, and closing schools can help flatten the curve.

A Pandemic Response Team has been formed to plan the transition to hybrid instruction. Vaccinations and the renovation of a number of schools are key factors.

School Business Administrator Daniel Castles said the district has installed MERV-13 filters to HVAC systems, which he said can block 99 percent of viruses; UV light systems in the ductwork; thermal imaging cameras to check temperatures; and plexiglass on teachers’ desks.

At Bayonne High School, fresh air intakes to the gym ventilation system were installed, the sewer line was replaced, and the parking lot was repaved.

The district is working on installing air purifiers for each classroom and shared space and expects to receive $9.7 million in CARES Act 2 funding, which will pay for purifiers among and other renovations. The district has also stockpiled masks, gloves, and hand sanitizers, paid for through the CARES Act and Coronavirus Relief Funds.

“It seems to me like the intention is to end the school year virtually,” said resident Danielle Bonilla. “Why not say that we are just going to finish virtually if it seems like you are not going to be able to open up the schools.”

Referencing the renovations, she said, “…  Is that going to be completed by September, so that our children can finally get back into the classrooms?”

Niesz countered, “We are not giving up our hope that we will be back in school by the end of the school year. We’re not stopping. Our mission is to get back to school, sooner or later.”

He said it is “realistic” that a transition to some form of in-person learning can happen before the school year ends.

Bonilla also asked about Bayonne’s virtual-learning ranking from the state Department of Education. Niesz said there is no data yet.

“Are you able to realistically measure the effectiveness of virtual learning?,” Bonilla asked.

Superintendent of of Curriculum and Instruction Dr. Dennis Degnan said that the district is currently analyzing that data.

“When we finally return to school, how will you fill in those gaps?” Bonilla asked, referring to students lagging behind during virtual learning.

Degnan said that the district would find a robust summer school, Saturday schools, and or personnel options among other solutions.

‘Once a happy kid’

“My child has not seen the inside of a classroom in 12 months,” said Susan Barrans. “She was once a happy kid. She has gotten depressed, she has panic attacks during school. “I speak to other people in New Jersey and New York whose kids are going full-time or hybrid.”

Barrans said it was “nice to hear” the district was working on a plan to return to the classroom safely, but urged the board to transition to in-person or hybrid instruction as soon as possible. She suggested that it can be done if teachers are vaccinated and willing to go back.

Niesz said that the district is ready to vaccinate teachers as soon as they become eligible. However, he added that there have been a number of infections among teachers teaching virtually from their classrooms.

“We had to shut two schools down,” Niesz said. “For Horace Mann, I know we were doing some fundraisers with the kids and the parents, and we had to stop that.”

Niesz said that the district will soon re-survey the community about instruction options.

“In September, my five-year-old was supposed to start at Henry Harris, but he has difficulty with online learning so I enrolled him in a private school here in Bayonne,” said Nicole Adamczyk said. “They went back full time in-person.”

In December she moved her older son to the same private school.

“Open up the schools,” Adamczyk said. “Plan and stick to your target dates. I pay taxes here, I am invested in community projects. I was forced to now pay tuition in a private school because the Bayonne Board of Education has been stringing parents and teachers along since March of last year.”

Even with the vaccine, Adamczyk said COVID-19 is not going to “magically” disappear. She said that stores are open, and her kids have been part of every recreation activity the city has offered since the pandemic began, even attending a summer camp at Midtown School.

“The schools aren’t open, so explain that,” Adamczyk said. The board did not respond to Adamczyk’s comments.

Gene Woods, president of the Bayonne Education Association, said,  “COVID has a two percent death rate. There are ten thousand plus students in the district. That’s 240 people who could possibly die as a result of this.”

Returning to classrooms could lead to an uptick in cases. “Kids are at risk,” he said. “Our teachers want to be back in the classrooms, but we only want to do it when it’s safe.”