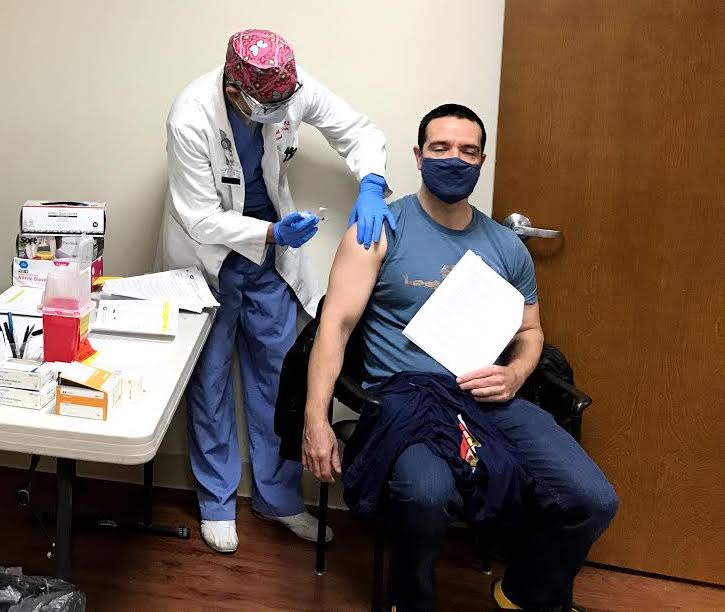 Dr. Singh administers the first dose of the Moderna vaccine to a hospital employee on Dec. 22.
×

Dr. Singh administers the first dose of the Moderna vaccine to a hospital employee on Dec. 22.

Singh said the city has been administering vaccines to eligible residents at two sites, BMC and the RWJBarnabas satellite hospital on Broadway.

How vaccines are allotted

If BMC received 100 vaccines, it needs to use 75 percent of those doses in three days or 100 percent in seven days, Singh said. That way, the allotment will remain at 100 doses. Singh said that allotments may increase if all doses are used within that time period.

Since then, Singh said the allocation has been increasing because the city was vaccinating residents quickly and keeping up with the dosage-use requirement. The allocation then increased to 600 vaccines for the hospital and 300 for the Health Department.

That number dipped slightly as efforts to vaccinate residents was hampered following snowstorms in February. While Mayor James Davis and city officials drove residents to their appointments during the storm to avoid missed appointments, the number of vaccines administered decreased, leading to a decrease in the allotment.

More doses on the way

The city has since acquired a “modest” allotment increase. According to Singh, the allotment given to Hudson County has increased from approximately 3,500 to 5,000. The city expects to receive a subsequent increase in doses because of this, but it depends on the supply chain he said.

Singh said that 125 first doses and 125 second doses of the Moderna vaccine are administered each day. More than 6,000 Bayonne residents have been vaccinated so far. Of those, approximately 2,000 have received both the first and second doses, according to Singh.

“There have been no serious side effects or hospitalizations because of this Moderna vaccine, and we really want the community to get registered and get their vaccines,” Singh said.

BMC is administering Moderna vaccines while the RWJBarnabas is administering Pfizer vaccines. Singh said this is because of a state survey that assessed supply chain management and cold storage capability at each hospital.

Singh estimated that the general public may began receiving the vaccine around the end of April or beginning of May.

The number of COVID-19 inpatients at BMC has been fluctuating recently. Singh said that a couple of weeks ago, the hospital reached numbers in the high 20s and low 30s.

That number began trending downward, reaching almost single digits two weeks ago. Since then, the number of inpatients has been in the teens.

Singh said the hospital has also ceased drive-thru testing due to a decrease in the volume of residents seeking testing. This is due to the increase in the number of other testing sites in the city, he said. Residents can still get tested inside the hospital with a prescription from their doctors.