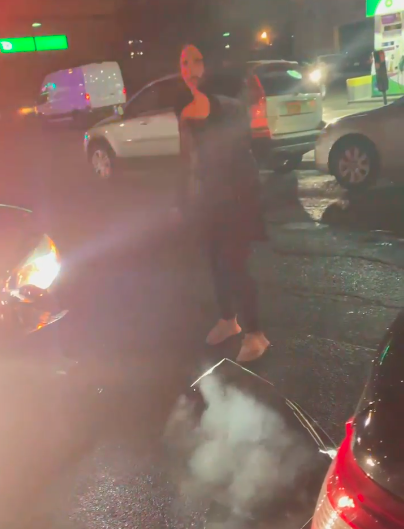 A screenshot of the video captures the woman going on a racist rant on March 16.
×

A screenshot of the video captures the woman going on a racist rant on March 16.

Another incident of racism has been caught on video in Bayonne. The interaction, posted to Facebook, has gone viral. Kellie Ryan shared the video of the woman hurling racial slurs at her.

“Last night Shadise Mosley and I was in a car accident in Bayonne,” Ryan wrote. “The woman that hit was on 10 as soon as she got out of her vehicle and seemed intoxicated. Although, she was apologetic at first she was trying to pressure someone into just accepting cash which is a big NO NO!! Once I stepped in and asked my friend if she was sure that’s what she wanted to do because she doesn’t know how much this is going to cost, this was the reaction I got!”

In the video, the woman is seen shouting at Ryan, calling her a “Black monkey” and repeatedly using the N-word. The woman repeatedly dared cops to arrest her, shouting “take me to f*cking jail.” Even as police handcuffed her and took her into custody, the woman continued to berate Ryan.

“Thank god, the ambulance just pulled up without us having to call anyone because they got to see her nasty, racist and stupid self shouting at the top of her lungs before the cops were ever on the scene,” Ryan said.

Black in Bayonne, a local Black activist organization, condemned the incident after being tagged in the viral video. According to cofounder Camille High, the organization immediately contacted the Bayonne Police Department.

“We had an incident on Tuesday night,” Geisler said. “It was a motor vehicle accident. As a result one woman hurled racial slurs at another woman. We arrested the woman who was using the racial slurs and charged her with disorderly conduct.”

Geisler said they are waiting to charge the woman with bias intimidation.

He continued: “We have all of her info. We are awaiting guidance from the Prosecutors Office as to whether or not this is a bias incident. If it is we will charge her accordingly.”

This is the second incident that has been caught on camera in less than two months. On Jan. 4, Bayonne resident Tameka Bordeaux was walking down Avenue C on her way to 7/11 to pick up medicine for her stomach when a white woman began to call her the N-word. Following the incident, an investigation was initiated by the Bayonne Police Detective Bureau which led to Claudia Emanuele being identified as the woman in the video. She was subsequently charged with Bias Intimidation and Harassment.

“City officials continue to state that ‘Behaviors such as these do not reflect the entire city of Bayonne,'” High said. “Clearly that is the opposite of what the African Americans living in Bayonne or visiting Bayonne are experiencing.”

High continued: “Black in Bayonne understands the impact of retraumatization on Black and Brown people. We will not share the video. Instead we will do the work necessary to STAND UP & SPEAK UP against racism!”

Last year, similar racially charged incidents took place in Bayonne, including threats against a Black-owned bookshop and its owner and a Facebook post calling for lynchings.