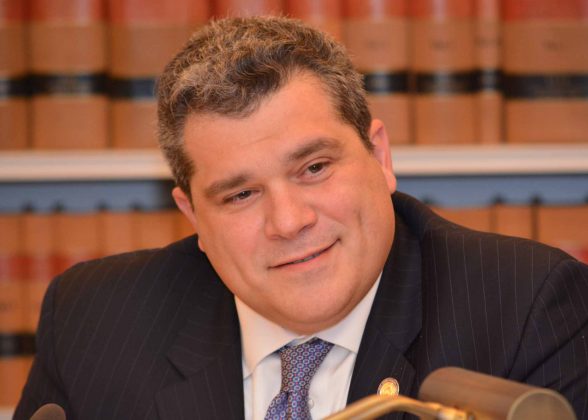 Chiaravalloti is seeking a fourth term in the state Assembly.
×

Chiaravalloti is seeking a fourth term in the state Assembly.

Assemblyman Nicholas Chiaravalloti, abandoned by Bayonne Mayor James Davis as the Democratic primary nears, plans to reply to Davis the old-fashioned way: at the polls.

In late February, Davis told Chiaravalloti and the Hudson County Democratic Organization (HCDO) about his decision to no longer support Chiaravalloti for the Assembly seat for the 31st Legislative District, which encompasses Bayonne and parts of Jersey City. The move bumped Chiaravalloti from the Democratic line on the ballot.

The power to determine who gets “the line” is formally held by the Hudson County Democratic Party Chairperson, Amy DeGise. However, Hudson County political tradition holds that the mayors of cities or towns in the legislative district have the power to choose state assembly and state senate nominations.

In 2007, Chiaravalloti ran off “the line” but lost. He was elected to his present term in the Assembly in 2016.

First nominated by Davis in 2015 after his election to mayor in 2014, Chiaravalloti is seeking his fourth term. He ran for the seat after Davis similarly used his power not to endorse the incumbent Assemblyman at the time, Jason O’Donnell.

Davis has held firm even after entreaties to reconsider by Gov. Phil Murphy and the Democratic legislators for whom Chiaravalloti serves as Majority Whip. So Chiaravalloti has officially announced he is running for reelection.

Previously, Chiaravalloti had been asking residents to sign his petition to be on the ballot for the upcoming Democratic primary in June. The filing deadline for candidates to submit petitions of nomination is April 5.

“From securing funding for Bayonne’s schools, the walkway project, and the pedestrian bridge over 440, to raising the minimum wage, establishing the Community College Opportunity Grant Program, revising civil asset forfeiture procedures, providing pre-k for all and standing up for our senior citizens and immigrant brothers and sisters, I am proud of the pragmatic, progressive record of results we have achieved,” Chiaravalloti said in a statement.

“I am in public service because I love my community, and I am filing my petitions to seek re-election to the Assembly because I want to continue to make Bayonne, Jersey City and Hudson County an even greater place to live and work.”

The Assemblyman will face off for the Democratic nomination against challenger William B. Sampson IV. Chiaravalloti was poised to run unopposed in the upcoming primary until the sudden turn of events.

After much speculation, Davis announced Sampson will be the new candidate for state Assembly for the 31st Legislative District.

Sampson, who graduated from Bayonne High School in 2007, is a crane operator for Global Container Terminal in Bayonne. If Sampson wins the seat, he will be the first Black legislator to represent Bayonne in the state Assembly.

It is still not clear why Davis decided to drop Chiaravalloti ahead of the June primary. Chiaravalloti was seen as a longtime political ally of Davis until recently.

As a result of the conflict between Davis and Chiaravalloti, the HCDO has been facing calls to end “the line.” The Jersey City Council recently passed a resolution endorsing the abolition of party lines on primary ballots in the interests of fair elections.

According to the resolution, sponsored by Ward E Councilman James Solomon, New Jersey primary election ballots are configured to “stack the deck” for certain candidates at the expense of others, “thereby undermining the integrity of elections and hindering our democracy.”

The Jersey City Council passed the resolution with only two votes. Solomon and Councilman-at-Large Rolando Lavarro voted in favor of the resolution while the other four council members abstained.

In Bayonne, local officials did not get involved when the matter was a topic of discussion at the March 17 city council meeting. Controversial former candidate for city council Peter Franco brought a resolution before the city council, practically the same as the one passed by Jersey City, calling for the abolition of “the line.”

However, no member of the council spoke nor moved to vote on the resolution. There was no further conversation on the matter.

As June approaches, the silence from local officials may change as the fight over the Assembly seat in the 31st Legislative District undoubtedly heats up.