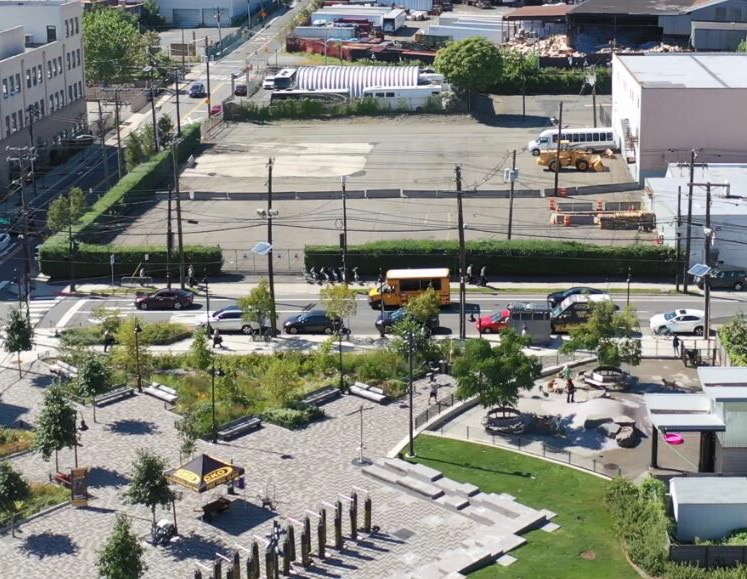 Tonight, the Hoboken City Council will vote on a proposed $11 million agreement between the city and Academy Bus which would double the Southwest Resiliency Park.

Under the proposed agreement, Hoboken would acquire one acre of Block 10, a parking lot owned by Academy Bus, for $11 million.

“After many months of negotiating with Academy, I’m pleased we have come to an agreement that will finally double the size of our Southwest Resiliency Park,” said Mayor Ravi Bhalla. “This agreement not only paves the way to create more open space in our neighborhood, but also does so without trading massive residential density rights. I look forward to working with the community on the design of this park, while providing immediate benefits to the neighborhood with a pop-up park this summer.”

“I’m extremely excited to add Block 10 for the expansion of the Southwest Resiliency Park,” said Council President Ruben Ramos. “It has been a long road but the park will serve as the centerpiece for the continuing revitalization of Southwest Hoboken. We will be working to have the space available for use as a pop-up park for the summer and also working with the public as to what will be included in the final design.”

The agreement would also allow Academy to add an additional 25 units, including five affordable housing units, to the existing permitted density on land adjacent to the park, but the permitted height and bulk of the residential property would not be increased as a part of the agreement, according to the city.

This agreement would end ongoing litigation between the city and Academy.

Before the council this evening is a first reading ordinance authorizing the agreement and acquisition of the land for $11 million, the first reading of a bond ordinance totaling $8.1 million to acquire Block 10, and a resolution awarding a $17,500 contract to Kimley Horn and Associate for designing and engineering a temporary popup park for the site once acquired.

According to the city, the temporary popup park will use equipment from the previous Northwest popup park to allow for activation of the space while the city conducts a community process to design the permanent resiliency park.

The city will also use a previously authorized $4.9 million bond ordinance for the acquisition cost, the design cost of the permanent Southwest Resiliency Park, and associated soft costs.

In the coming weeks, the city will host a community meeting to solicit feedback from the community and discuss the land acquisition and potential uses of a popup park, according to the city.

Tonight’s council meeting begins at 7 p.m. via Zoom and can be streamed live from the city’s Facebook page.  For more information on how to join the meeting click here.