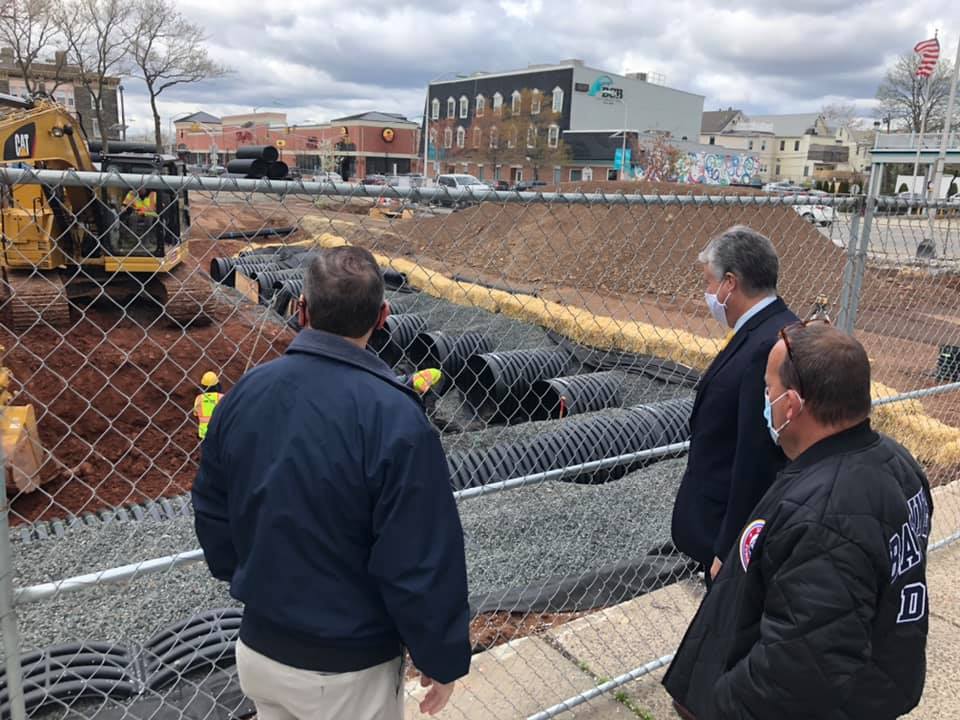 The renovations at Fitzpatrick Park include storm water management upgrades underneath the park.
×

The renovations at Fitzpatrick Park include storm water management upgrades underneath the park.

Mayor James Davis and other city officials recently toured the construction site at Fitzpatrick Park, where major renovations are ongoing. The park is across the street from City Hall on Ave. C, between West 26th and 27th Streets.

“This morning I inspected the Fitzpatrick Park renovations with DPW Director Cotter and City Engineer Rob Russo,” Davis said. “This complete makeover of the park will bring so many new features, including swings, play areas, roller rink, benches, a dozen new trees and over 200 shrubs and plantings.”

The renovations broke ground on Oct. 14. The upgraded park will include separate playgrounds for two- to five-year-olds, and five to 12-year-olds. There will be new swing sets and a splash park area.

One playground will be firefighter-themed, and one will be police-themed because the park was constructed on the site of the former Police and Fire Headquarters.

A roller hockey rink will be installed, doubling as a basketball court. A new patio area will include game and picnic tables that comply with the Americans With Disabilities Act.

A new drinking fountain will include a pet drinking feature. Pet waste stations will be added. Twelve shade trees will be installed along with 272 shrubs and other plantings.

The renovated park will once again become the home of the Bayonne Farmers Market, as well as other events. Traditionally, a Christmas Tree lighting and Menorah lighting are held at Fitzpatrick Park.

The improvements will include the installation of storm water management upgrades, which will reduce the rate of runoff for storms in the park and along Ave. C.

Bayonne’s existing sanitary sewer system is a combined system that accepts both sewage discharge and storm water runoff. This combination places a strain on the system.

A new storm water piping system, separate from the sanitary piping from 26th Street to 28th Street will be installed. There will be new drainage structures at each of the Ave. C intersections with 26th, 27th, and 28th Streets.

The construction of a cistern accounts for much of the cost of the renovations.

“What’s under the park is very important too, as we are installing a new storm water collection system,” Davis said. “This system will separate storm water from our old combined sewer and storm water system and will help alleviate flooding in the area.”

The city council adopted an ordinance bonding $2,086,786 for improvements. Construction will be funded partially by a Hudson County Open Space Trust Fund Grant of $661,000, and funding from the New Jersey Department of Environmental Protection Water Bank for $1,478,547.50.

The contractor will be Picerno-Giordano Construction of Kenilworth, awarded by the council.

The renovations are part of ongoing efforts since before the COVID-19 pandemic.

“My administration has been focused on improving our parks in town,” Davis said. “To date we have redone Clark Park, Collins Park, Ahern Veterans Stadium, Special Needs Park, DeSena Park, Fitzpatrick Park, and with our partners at Hudson County; Stephen Gregg Park, and we are not done! We will continue to improve our parks for our community to enjoy!”

Construction on Fitzpatrick Park is expected to finish sometime this year.