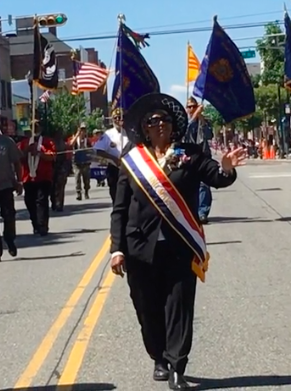 In 2019, Edith Ferrell was the last Bayonne Memorial Day Parade Grand Marshall to march in the parade.
×

In 2019, Edith Ferrell was the last Bayonne Memorial Day Parade Grand Marshall to march in the parade.

The committee, made up of all the Veterans Posts, organized the event, while the city supplied financial assistance. COVID-19 forced the cancellation of the 2020 and 2021 parades. But the state of the veteran population has led to its final cancellation.

Veterans are aging, and that has caused the committee to carefully consider the future of the parade, according to a press release. The committee decided to end the parade since “the few veterans who are still active are not enough to organize the parade and do all that is required to have a parade.”

The committee will still decorate veterans’ monuments before Memorial Day, and place flags on veterans’ graves. Members of the public can join a number of activities honoring local veterans.

At 12:30 p.m., monuments on 1st Street will be decorated starting with the Viet Nam Veterans Monument and proceeding to the Korean War Monument, World War II Monument, Brady’s Dock, and ending at O’Neil’s Point on 8th Street and Broadway.

On May 27 at 11 a.m., ceremonies will be held at Holy Name Cemetery in Jersey City.

On May 29, at 9 a.m., graves at Bayview Cemetery in Jersey City will be decorated.

At 10:45 a.m., ceremonies will be held at the Marine Corps monument at the Peninsula and the Mayor Donovan Memorial.

At 11:15 a.m., a memorial to CMH Stephen Gregg will take place at Stephen Gregg park, followed by ceremonies at the Doug Lee O’Neil tree, the Hiker Monument, and the GAR monument at 39th St. and JFK Blvd.

At 11:40 a.m., the Monument to Living Veterans at Veterans Stadium will be decorated.

At 12 p.m. Denis Christian Miranda Monument at 23rd and Ave. A will be decorated.

At 12:15 p.m. the Marine Corps Memorial in front of St Henry’s church will be decorated.

On May 31, at 10 a.m., the Memorial Day Parade Committee will hold a Service dedicated to all deceased veterans at 5th Street and Orient Street.

This may not spell the end of the Memorial Day Parade in Bayonne. While the committee has cancelled any future plans for a parade, some members are looking to form a new group to bring the parade back in 2022.

Trains and buses added for Thanksgiving