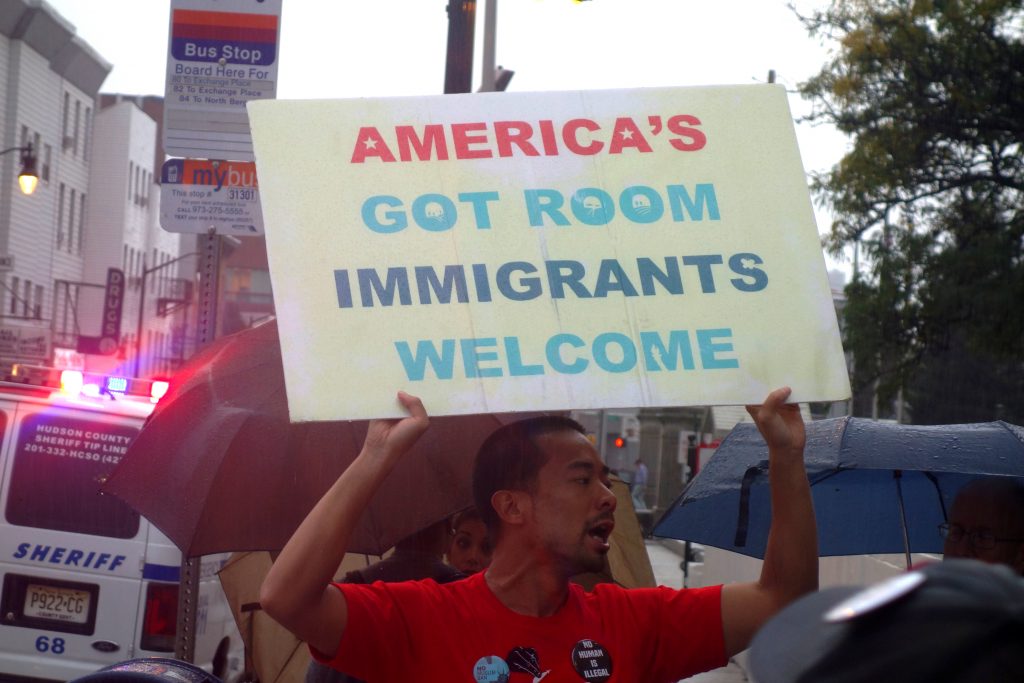 According to the ACLU-NJ, protesters of the renewal of the county's contract with ICE to house detainees have had their First Amendment rights violated.
×

According to the ACLU-NJ, protesters of the renewal of the county's contract with ICE to house detainees have had their First Amendment rights violated.

Freedom of speech and the right to peacefully assemble are at the center of a new brief filed by the ACLU-NJ on behalf of protesters who were issued temporary restraining orders and arrested after protesting outside Hudson County Executive Tom DeGise’s home last year.

According to the ACLU-NJ court filing, Hudson County officials violated the First Amendment rights of protesters when it used “draconian measures,” including arrests to silence opponents of the county’s renewal of its contract with Immigration and Customs Enforcement to house detainees at the Hudson County Correctional Center.

The officials sued local residents, including their own constituents, who protested outside just one of their homes because they do not agree with their political views, according to ACLU-NJ.

ACLU-NJ represents five protesters they say were targeted by the county officials and are defending them against a temporary court order entered in December, which prevents them from protesting except  for one hour every two weeks in certain places.

“This case is about the people’s right to speak and protest against a government policy,” said ACLU-NJ Legal Director Jeanne LoCicero. “Our clients were using public sidewalks to express themselves and should be subject to the same laws as everyone else who uses them. These officials went to court to insulate themselves from opposing views. It’s not just a misuse of public resources, it’s also unconstitutional.”

According to the filing, the temporary restraining order could be a prior restraint on free speech.

“The constitutional question before the Court is whether the imposed temporary restraining order and requested injunction are prior restraints on speech and presumptively unconstitutional, a determination that includes an analysis of whether the injunction was issued because of the content of the expression,” states the filing. “In of the undisputed facts gathered during discovery, and as detailed below, it is clear that the injunction was sought based on the content of expression, unconstitutionally singles out a particular subject matter for differential treatment, and provides unbridled discretion that allows for discriminatory enforcement.”

Following five consecutive nights of protests in the Jersey City Heights neighborhood where DeGise lives, DeGise and five Hudson County commissioners obtained a temporary restraining order against five named defendants, all associated with the Abolish ICE NY/NJ Coalition, and up to 20 “John Does and Jane Roes.”

That same day, Hudson County Sheriff’s Officers cited the temporary restraining order in their decision to arrest four people who were peacefully assembled in DeGise’s neighborhood and in compliance with local noise ordinances, which ACLU-NJ says violated their First Amendment rights.

The restraining order limits all protests to one every two weeks between 7 and 8 p.m., and to no more than 10 people. Protesters must give law enforcement 24 hours notice. They cannot come within 200 feet of the commissioners’ homes, and they can protest only at a specific corner near DeGise’s home.

“With these extreme restrictions in place, it’s clear that for this targeted group of people, speech is no longer free,” said ACLU-NJ Executive Director Amol Sinha. “Government officials cannot single out one cause to silence. Hudson County officials cannot criminalize views they oppose and silence opponents of the ICE contract throughout the entire county.”

The 69-page court filing further argues that the temporary restraining order unconstitutionally burdens far more speech than necessary to serve a significant governmental interest and that the elected officials don’t need a temporary restraining order to protect their residential privacy because local ordinances do so, which the protesters adhered to.

“Judicial intervention is not an appropriate substitute for the enforcement of local ordinances, and the TRO here provides unbridled discretion to criminalize lawful speech activities,” states the filing.

The defendants – Amy Torres, Stacey Gregg, Kason Little, Marisa Budnick, Anand Sawate, and John Does and Jane Roes 1-20 – seek to dissolve the temporary restraining order; decline to issue an injunction; and dismiss the lawsuit brought by DeGise and the five county commissioners.

Larvicide to be used in parts of Hudson County Oct. 9