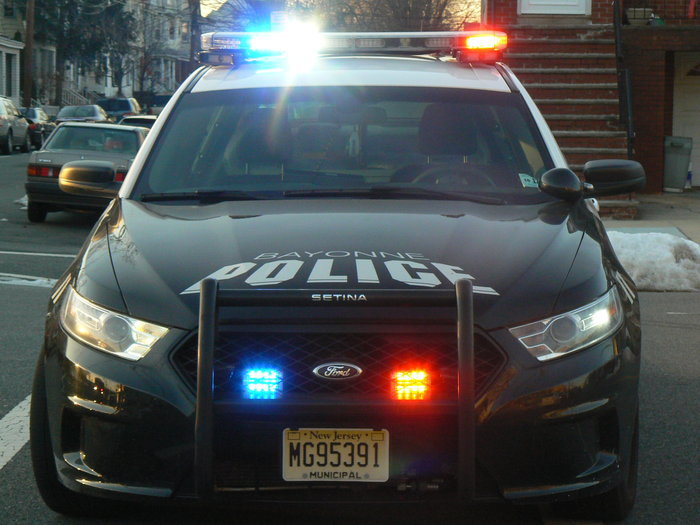 Adeyemi Adebola was taken into custody from the area of 47th Street and Broadway, according to the Bayonne Police Department. According to the police, an officer on traffic control during street paving was approached by Adebola who inquired about the whereabouts of his car.

After the officer advised him that his car had been impounded for being parked in the work zone where numerous “No Parking” signs had been posted, Adebola became irate and aggressive, demanding the officer return his car.

During the confrontation, Adebola identified himself as a New York Police Officer, producing a gold Police Detective style badge. As additional officers arrived on the scene, Adebola was advised of the process to retrieve his car from the impound lot and was sent on his way.

Shortly thereafter, Adebola returned to the officer’s location after speaking with a representative of the tow company and was “clearly unhappy” with the conversation he’d had with the tow company.

Another officer advised Adebola that he was under arrest for disorderly conduct. As an officer was positioning him in the police cruiser, Adebola grabbed officer’s wrist, squeezed tightly, and pressed his fingernails into the officer’s wrist, wounding him.

A search led to the recovery of the identification and badge that Adebola had displayed to the officers, which was determined not to be a police badge, confirming Adebola was not a New York Police Officer. Adebola was transported to Police Headquarters to be processed for Disorderly Conduct, Aggravated Assault on a Police Officer, and Impersonating a Law Enforcement Officer.

At headquarters, Adebola continued his uncooperative and belligerent behavior, kicking his shoes off in the direction of an officer who was preparing to place him in a holding cell. The shoes struck the officer, causing Adebola to be charged with another count of Aggravated Assault.

After being placed in the cell, Adebola scooped out the “unsanitary” toilet water from the toilet in the cell and threw it at officers as he verbally threatened them, for which he was charged with Terroristic Threats.

Twice in one day

While in the cell, Adebola continued his belligerent and aggressive behavior until he was released on a summons. Shortly after his release, officers were dispatched to 64 W. 22nd Street, Russell’s Auto Body Shop on a report of a fight in progress.

Officers observed numerous individuals on the ground attempting to subdue a male, later identified as Adebola. According to the three male victims, who were Russell’s employees, Adebola entered the business under the impression that his impounded car was stored there.

After he was advised that his car was not on the property and that he needed to contact the tow company for instructions, Adebola became irate and argumentative, causing the two victims to attempt to calm Adebola.

Adebola was asked to leave the premises but continued to yell at and push the employee. As the two victims attempted to escort Adebola out of the shop, Adebola swung his closed fist at the victims, and a fight ensued.

The victims got Adebola outside and held him to the ground until police arrived. During the altercation, Adebola bit two employees, causing one to suffer a deep laceration to his hand. Another employee suffered a small laceration to his nose.

After being treated, Adebola became irate, refusing to exit the hospital bed and go with the officers to the Hudson County Jail. As officers unsecured him from his bed and attempted to handcuff his hands behind his back, Adebola became aggressive and combative, kicking and punching the officers while twisting his body so as not be handcuffed.

Adebola bit the hands of two officers, breaking the skin. Adebola was subdued and transported to the Hudson County Jail without further incident. The two officers were treated at the Bayonne Medical Center.

It was a bad May Day all around.