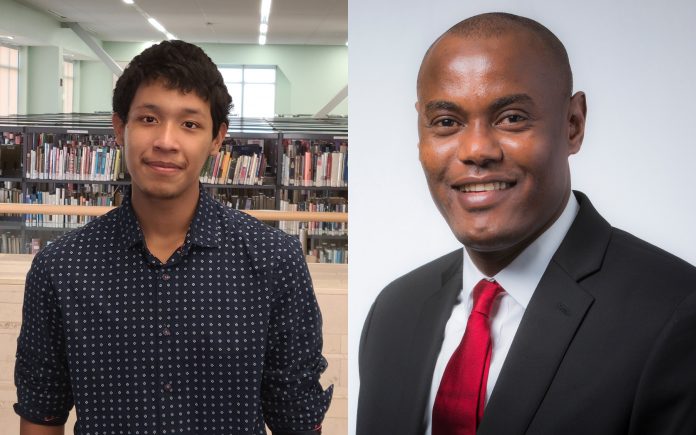 The Jack Kent Cooke Foundation recognizes exceptionally talented community college students seeking to complete baccalaureate degrees. Scholarship recipients are selected for their academic ability and achievement, financial need, leadership, persistence, and service. Only 72 students in the United States have been selected as recipients this year. This is the third consecutive year in which HCCC students have been named Cooke Scholars; Sarra Hayoune was a 2019 recipient, and Abdellah Amrhar received the scholarship in 2020.

“The entire HCCC community joins me in congratulating Adoum and Pedro,” said HCCC President Dr. Chris Reber. “Not only are they outstanding students, but they are also exemplary citizens. We are very proud of them.”

Considered one of the most prestigious scholarship awards in the nation, each Jack Kent Cooke Foundation award is intended to cover students’ educational expenses to complete baccalaureate degrees – including tuition, living expenses, books and required fees. Awards vary by individual, based on the cost of tuition as well as other grants or scholarships they may receive. This highly competitive scholarship includes up to $40,000 per year for up to three years to attend a four-year, accredited undergraduate college or university where they may pursue any area of study; college planning support; ongoing advisement; the opportunity to connect with a thriving community of fellow scholars; and the opportunity for additional funding support for graduate study.

Adoum Allamine is a Criminal Justice major, Vice President of the Criminal Justice Club, Secretary of the Honor Students Council, and member of National Society of Leadership and Success and Phi Theta Kappa International Honor Society.  Adoum has served the community through volunteer work at Liberty State Park, the Hunger Free Bayonne food distribution program, Hackensack Riverkeeper cleanup, and Martin Luther King, Jr. Day of Service at a Jersey City public school, among others. When the pandemic hit, he lost his job as a car service driver, but continued giving back to the community by donating items to the HCCC Food Pantry, cooking at a soup kitchen, helping at food distributions, and mentoring HCCC students. Adoum has applied to, and is awaiting decisions from Brown, Columbia, Princeton and Vanderbilt Universities.

Pedro Moranchel is a Physics major, an Honors srudent, and the College’s 2021 Valedictorian. He is the son of Mexican and Honduran immigrants whose struggles motivated him to set ambitious academic goals and work hard. Pedro is Vice President of Scholarship for the College’s chapter of Phi Theta Kappa International Honor Society, President of the HCCC STEM Club, and Director of the Inter-Club Council of the HCCC Student Government Association. Pedro participated in the Summer Research Experiences for Undergraduates (REU) program at Queensborough Community College, which was funded by the National Science Foundation, and a prestigious 10-week internship at the Princeton Plasma Physics Laboratory. He has worked as a volunteer in several environmental clean-up projects in Hudson County. In addition to receiving the Cooke Scholarship, Pedro is also an Achieving the Dream (ATD) Scholar. His goal is to improve student success and close achievement gaps for historically underserved student populations. Pedro has applied to Princeton University, Williams College, and Massachusetts Institute of Technology. He plans  to produce diversity programs connected to STEM as a professor or person of influence in Hudson County.