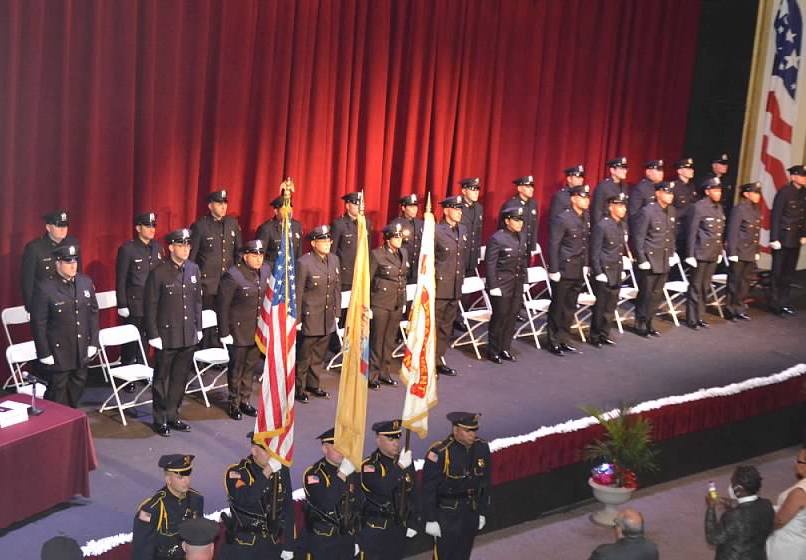 The BPD welcomed its newest officers on June 15.
×

The BPD welcomed its newest officers on June 15.

The Bayonne Police Department recently held a swearing-in ceremony at Bayonne High School for officers who joined the force in 2019, 2020, and 2021.

Members of activist group Black in Bayonne were present at the ceremony and applauded the ascension of Roberts and Rhodes. Black in Bayonne and the Bayonne branch of the NAACP have been meeting with the city to work toward more diversity in the police department and to address other issues.

“For the first time in history, the Bayonne Police Department welcomes two female African-American officers to the force!,” the Black in Bayonne cofounders said in a statement. “Remember, because of you, other little black girls can join the BPD force now.”

Addressing all the recruits, Ashe-Nadrowski said, “Bayonne will be better and safer because of you.”

They “have joined the ranks of one of the greatest police departments in the United States,” said Mayor James Davis. During the past year, he said, the department “stood tall” and “made each of us proud.”

Police Chief Robert Geisler thanked Mayor Davis, the city council, and Director Kubert for the “planning and forethought” that went into adding the new officers. Geisler called being a police officer “the best job in the world,” which provides “a front row seat to life.”

The program included an invocation by Father John Fencik, a benediction by Rev. Dorothy Patterson, and musical selections by the Bayonne Police Pipes and Drums.