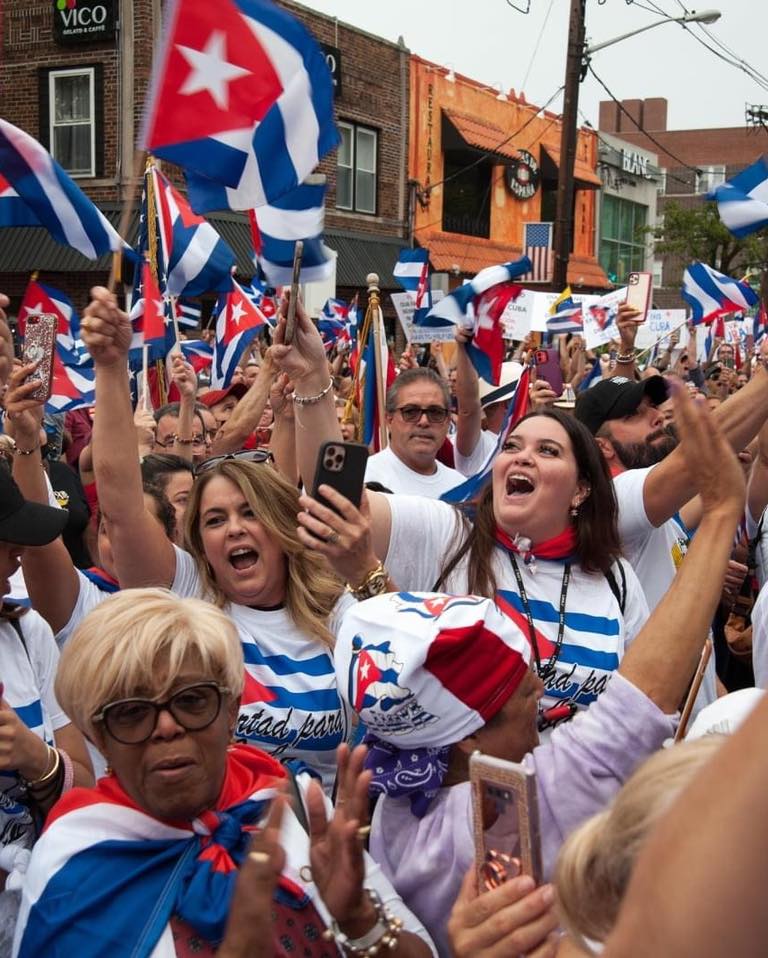 Thousands of residents take to the streets to rally for freedom for the Cuban people.
×

Thousands of residents take to the streets to rally for freedom for the Cuban people.

Amid anti-regime protests in Cuba, North Hudson residents have taken to the streets in solidarity.

Hundreds, even thousands, of marchers assembled at Braddock Park on 79th Street and Bergenline Ave. on July 13 to support Cuban protesters. The area is home to many Cuban immigrants and Cuban-Americans.

In Cuba, throngs have taken to the streets against the current administration of President Miguel Díaz-Canel. The country has been hit hard by the COVID-19 pandemic, and residents are protesting the Communist regime’s handling of the crisis as the Cuban economy collapses.

As marchers paraded down Bergenline from Braddock Park in North Bergen to Town Hall in West New York, various chants rang out from “Cuba Libre,” to “Si se puede” or “Free Cuba” and “yes we can” in Spanish. Many attendees were adorned with Cuban flags or signs calling for freedom for Cubans.

Both Sacco and Stack called for U.S. military intervention.

“Years ago, when I was in school, Castro took over Cuba, and people had to escape,” Sacco said. “Those who came here built our country. They made the United States, New Jersey, and Hudson County great. No army is stronger than an idea whose time has come. The idea now is freedom. Cuba Libre. God bless us all. Let’s take back Cuba.”

Rodriguez, addressing the crowd in Spanish, reiterated his support for the Cuban people. Zitt gave a short speech, echoing calls for democracy on the island nation.

“We stand in solidarity with everyone who is suffering in Cuba,” Zitt said. “It’s gone on long enough, and today starts the spark. Everyone deserves democracy and freedom.”

Other officials in support

U.S. Senator Robert Menendez did not attend but has been vocal in support of the Cuban people. Menendez, former Mayor of Union City, was born to Cuban immigrants.

“For decades, Cuba’s dictatorship has used violence and repression to silence its people, rather than permit the free exercise of democracy and their basic social rights,” Menendez said in a statement. “This must end. The world’s eyes are on Cuba tonight, and the dictatorship must understand we will not tolerate the use of brute force to silence the aspirations of the Cuban people.”

U.S. Congressman Albio Sires could not attend the rally but held a press conference with Rodriguez and other Cuban elected officials earlier in the week.

“Having been born in Bejucal, Cuba, and fled the Communist regime at age 11, I feel a deep connection to those who courageously took to the streets,” Sires said in a statement. “Like so many Cubans, I have never given up hope in believing that one day the Cuban people will finally break free from the chains of a six-decade dictatorship. I am deeply inspired by the tremendous courage I witnessed yesterday, and I will continue to do everything I can in Congress to promote the democratic aspirations of the Cuban people.”

While the event was organized by the Hudson County Democratic Organization, Republicans attended. Assemblyman Jack Ciattarelli, who is running against Gov. Phil Murphy, led a group of Republican marchers in support of the Cuban people. Murphy has not taken a stance on the matter yet.

“Assemblyman Ciattarelli has run a campaign of division — division along urban or suburban lines, division across income lines, and division across racial and ethnic lines,” they said in a joint statement. “After supporting the rhetoric and bigotry of the Trump administration, Assemblyman Ciattarelli is now attempting to use our vibrant Cuban community as a pawn for his own political purposes. We wholeheartedly reject this opportunistic way of thinking, and won’t allow a politician with a self-serving agenda to weaponize the Cuban people’s suffering and drag us back to the days when our diverse communities were put into silos and left behind.”

Ciattarelli did not respond to the statement, but on social media, he thanked those who attended the rally.

“Our sisters and brothers in Cuba are being denied basic human rights,” Ciattarelli said. “I was honored to stand by hundreds of New Jersey Cuban Americans today at the Cuban Liberation Rally in North Bergen. We must stand united as Cuba continues to fight for freedom and democracy.”