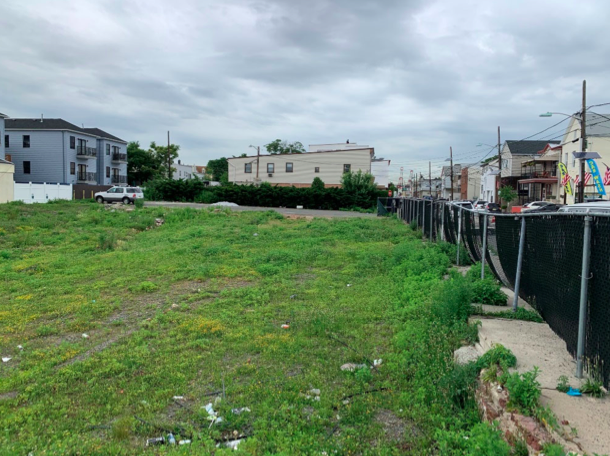 The vacant lot on Avenue C. Photo via the redevelopment study.
×

The vacant lot on Avenue C. Photo via the redevelopment study.

The Bayonne Planning Board has declared a long-vacant lot along Avenue C as a non-condemnation area in need of redevelopment.

This is the first step in redeveloping the property at 455-461 Avenue C. The study for the property was presented to the board by City Planner Mika Apte at the July meeting.

The site was home to the former Bayonne Giant Laundromat. The mixed-use building, which featured the laundromat on the ground floor and 14 residential units above, was heavily damaged in a fire in 2016.

The building was demolished that same year, and the lot has been vacant ever since.

“It’s dilapidated, it’s an obsolete site right in the middle of a very important commercial corridor in the city of Bayonne,” Apte said.

Maintenance issues include overgrown grass, garbage, and broken paving. Per the NJDEP, it is an active known contaminated site that is currently under remediation.

According to the redevelopment study presented to the board, the site meets the criteria for redevelopment because it is substandard, vacant, and because it is within the Urban Enterprise Zone. The site partially fits the criteria for fire damage since its assessed value decreased due to the 2016 blaze, but it does not completely because the site is less than five acres.

The next meetings of both the Bayonne City Council and the Bayonne Planning Board are in August. For more information, go to bayonnenj.org and click on the respective event on the calendar webpage.