The NJDEP will pursue a cleanup of the river 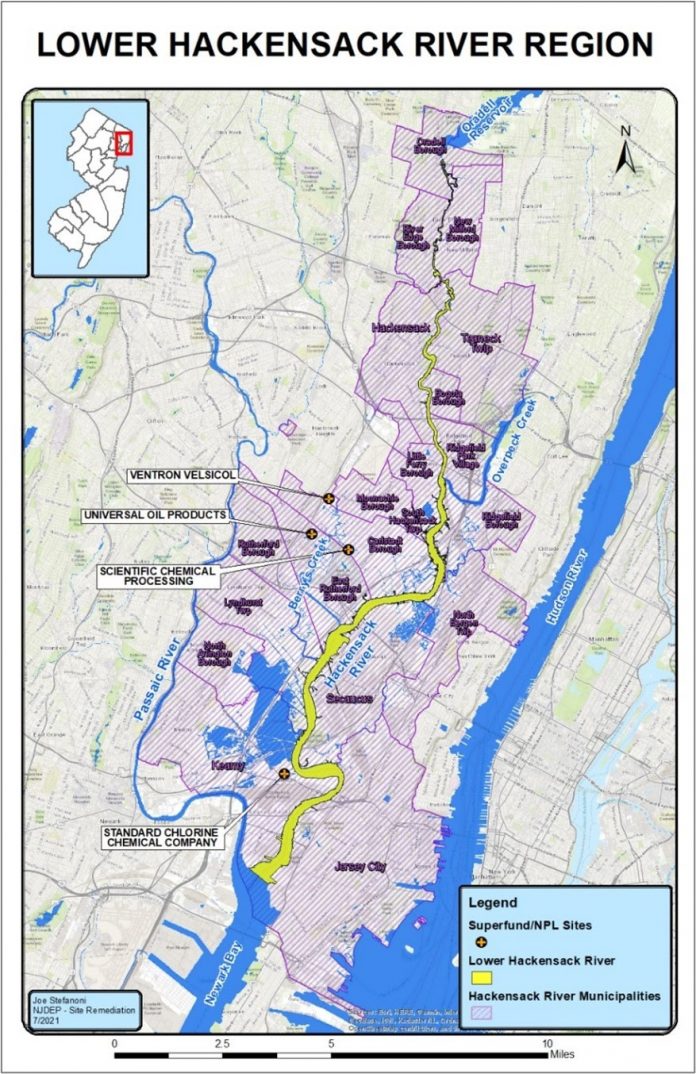 The state will pursue the cleanup of the Lower Hackensack River as a federal Superfund site, according to New Jersey Department of Environmental Protection Commissioner Shawn LaTourette.

This would be the first time that a New Jersey river would be proposed for Superfund designation and marks a critical step toward remediation of river sediments contaminated with mercury, polycyclic aromatic hydrocarbons, and other pollutants from past industrial practices.

LaTourette was joined by U.S. Representatives Bill Pascrell, Jr. and Josh Gottheimer, as well as officials from Hudson County and Bergen County municipalities that line the river to announce support for cleanup through the U.S. Environmental Protection Agency’s (EPA) Superfund program. The announcement was made at Laurel Hill Park along the Hackensack River in Secaucus.

The state’s decision to pursue Superfund designation will enable the EPA to implement a rulemaking process to propose adding 23 miles of tidally influenced river from the Oradell Dam to Newark Bay in accordance with the federal Comprehensive Environmental Response, Compensation and Liability Act (CERCLA), commonly known as Superfund. The designation would provide access to federal funding and enable the EPA to start finding parties to fund remediation.

Discharged into the river

The EPA evaluated the Lower Hackensack River and will complete the evaluation for potential inclusion on the National Priorities List (NPL). This process is expected to take about a year, given the need to collect recent samples and analyze data.

Supported by the DEP, the EPA has been working on long-term remediation of four Superfund sites in the watershed to protect local waterways, groundwater and natural resources. But over the decades, tides have distributed pollutants that were discharged from these and other contaminated sites throughout the Lower Hackensack River, prompting numerous restoration studies.

In 2016, the EPA completed an Expanded Site Inspection that showed that additional assessment of the river is necessary due to high levels of contamination from the existing Superfund sites as well as other sources in the watershed. Since then, the DEP has completed extensive evaluations that resulted in its support for Superfund listing as the best option to address the challenges of remediating river sediments and enhancing protection of water quality and ecological resources.

Four current Superfund sites believed to have contributed significantly to contamination of Hackensack River sediments are: the Ventron/Velsicol site in Carlstadt and Wood-Ridge, a mercury processing facility that operated from 1929 to 1974; Universal Oil Products, Chemical Division, in East Rutherford, which processed chemicals from 1930 to 1979; Standard Chlorine, in Kearny, which manufactured and processed various chemical products, including mothballs and lead-acid batteries from around 1916 to 1993; and Scientific Chemical Processing in Carlstadt, which conducted various chemical recovery, processing and storage activities from around 1941 until 1980.

“Today marks a milestone in the history of the Hackensack River and the State of New Jersey,” said Governor Phil Murphy. “By officially supporting designation of the lower river as a Superfund site, we are committing to working with our federal and local partners in mapping a clear course to restoring the river as a clean and vibrant asset for the people who live, work and recreate in the communities along this important natural resource, including those that have been disproportionately burdened by environmental degradation.”

“Designating the Lower Hackensack River as a federal Superfund site will provide the tools we need to remove decades of contamination that have polluted river sediments and restore the natural resources that have been impaired for far too long,” said Commissioner LaTourette. “The Murphy Administration’s commitment to the cleanup of this river also presents an incredible opportunity to enrich the communities throughout the Hackensack watershed as we defend the public’s right to the full use and enjoyment of their natural resources.”

“Despite decades of pollution, the Hackensack River is an ecological gem in the heart of the most urbanized part of New Jersey,” said U.S. Senator Cory Booker. “By restoring the Hackensack through the federal Superfund program, the river will be able to reach its full potential as an ecological and economic asset for this region.”

“For too long, our North Jersey communities along the Hackensack River have suffered while people dragged their feet… Now we commence the work of cleaning up this river,” said Congressman Pascrell. “Once these efforts begin, our region will realize the powerful economic, environmental, and recreational benefits the Hackensack River has to offer. Cleaning up dilapidated and dangerously contaminated sites remains a top priority for my office. We will remain vigilant and not allow any more inaction… Now let’s get to work.”

“A cleanup of the Hackensack River holds immense potential for improvement in quality of life and recreational opportunities for Secaucus and surrounding communities,” said Secaucus Mayor Michael Gonnelli. “We have seen a vast improvement due to mitigation efforts over the last few years. An initiative by the NJDEP to address sediment contamination will bring a lasting impact. I thank the NJDEP and all contributing agencies for their plans and efforts towards reviving the ecological balance of the Hackensack River.”

“I have been working on getting this designation for the river since 2015,” said Hackensack Riverkeeper Capt. Bill Sheehan. “Now everything is lining up. I realize that this is one step in the process and that cleanup will take time. But this is an important step for the health of the river and for all the people who live in the region. This is really the best way forward. It’s time to get the river back to the way it should be.”

“Working to gather data, EPA collected sediment samples from nearly 200 sample stations along the river from the mouth of the river to the Oradell Dam, a total of 23 river miles,” said EPA acting Regional Administrator Walter Mugdan. “Our preliminarily review of the sampling data suggests the Hackensack River suffers from widespread sediment contamination and environmental degradation. The Hackensack River is surrounded by river communities that are disproportionately affected by environmental burdens and addressing environmental justice issues is a priority for EPA. The State of New Jersey’s official support marks a significant step in EPA’s process of formal listing on the National Priorities List. Sites are eligible to be listed on the NPL upon completion of Hazard Ranking System screening, public solicitation of comments about the proposed site, and after all comments have been addressed.”