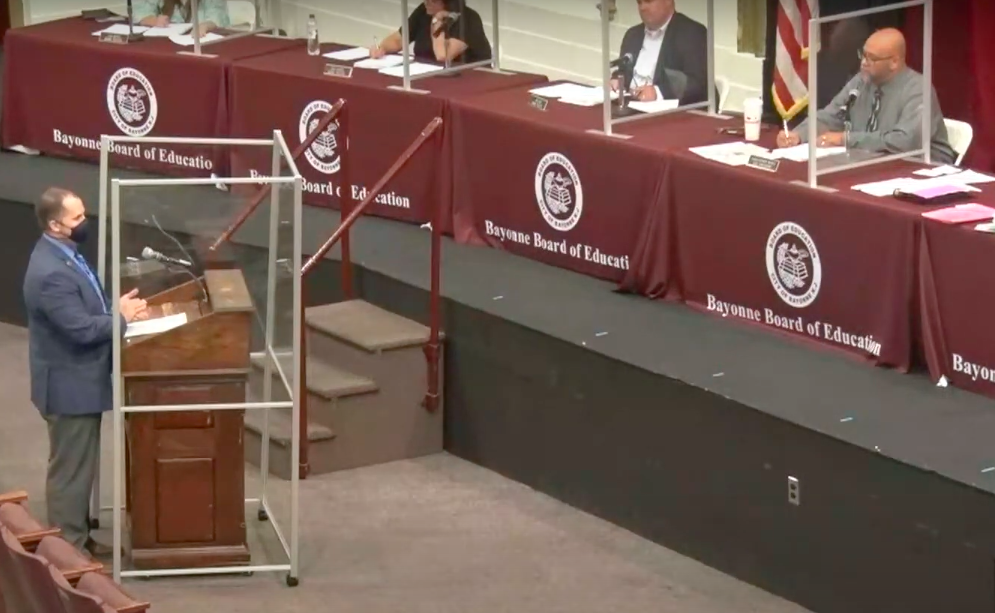 BEA President Gene Woods addresses the board at its July meeting.
×

BEA President Gene Woods addresses the board at its July meeting.

The Bayonne Board of Education has voted to table part of a resolution that would revise a board policy regarding “controversial issues.” The move came at the request of Bayonne Education Association (BEA) President Gene Woods. Woods took issue with some of the language in that policy at the July 27 board meeting.

At the June meeting, the board announced it would soon vote on changes to bylaws, guidelines, and policies and listed them online for the public to view. According to Woods, during their review of the changes, members of the BEA took issue with revisions to policy 6144 about “controversial issues.”

Woods acknowledged some of the questions posed may not be able to be answered right away, but were important to bring to the board before voting to approve the policy.

“We ask that this particular board policy gets tabled tonight for some discussion,” Woods said. “The Bayonne Education Association has provided some recommendations for the possible changing and addition of the language to it.”

Based on the proposed revisions to policy 6144 ‘controversial issues,’ the BEA has offered its own amendments to the policy that Woods said “reflect the mission statement of the Bayonne School District and will be beneficial to both students and staff.”

Woods requested clarification on that sentence and what it would mean for staff.

“If you go back to 2014, when the common core curriculum standards were initiated in the U.S., there was some controversy that arose in the Rialto Unified School District in California,” Woods said. “In that school district, they asked their students to write an essay confirming or denying the credibility of the Holocaust. [They] asked their students to put into question whether or not the Holocaust was used as a propaganda tool… that would be used for political and monetary gain by the Jewish people. So that’s when you run into a huge issue of what does that mean by presenting both sides?”

Woods argued that there are not always “both sides” to every issue.

“When it comes to the Holocaust, there are no two sides. There are other issues that are out there, but the Holocaust is like that prime one. You can’t have two sides or an opportunity to debate the reality of the Holocaust.”

Woods said the BEA also took issue with the part of the resolution, which states that “such discussions shall not present any one opinion as being definitive.” He questioned the implications this would have.

“Right now, in our country, there is a blurring of the lines between fact and opinion,” Woods said. “Some of the lies that have been promoted have been said so frequently that they have been turned into fact by some groups and individuals.”

Before he could finish, Woods was interrupted by Board Secretary Gary Maita, who suggested the board table the part of the resolution regarding controversial issues.

“I suggest you reach out, between now and the next meeting, and see if we can come to some sort of understanding with 6144,” Maita told Woods.

Board President Maria Valado agreed to table the policy. She added that she would have it reviewed by board counsel.

“We’ll schedule a meeting with our counsel, yourself, and us, so that we can revisit the language in that policy and we can all come to an agreement,” Valado said.

Trustee Jan Patrick Egan asked Woods to send the board the issues the BEA has with the language in the policy.

The board may take action on the policy at its next meeting in August. For more information, go to bboed.org and click on the event on the calendar webpage.

Public schools to shift to hybrid instruction in May