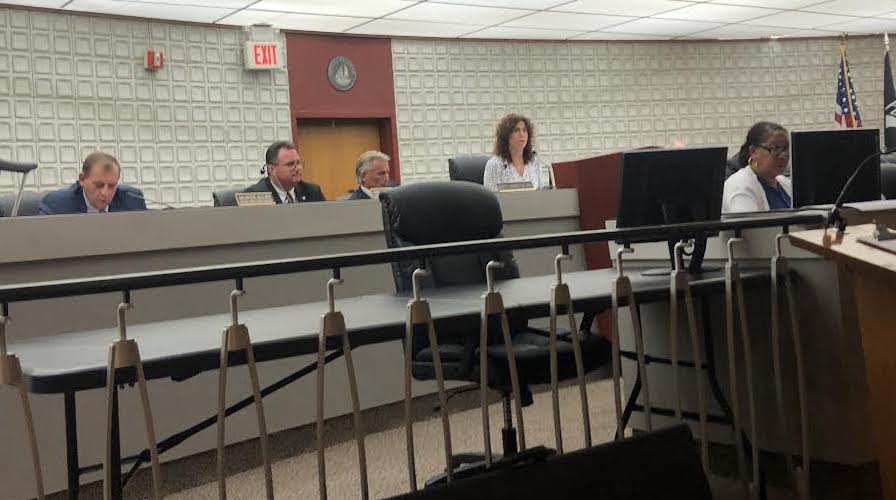 The Bayonne City Council introduced the 2021 calendar year budget at its July meeting.
×

The Bayonne City Council introduced the 2021 calendar year budget at its July meeting.

Former city employee Gail Godesky questioned if the $500,000 from the county for a portion of the waterfront walkway along Newark Bay was in this budget. Initially slated to be part of this year’s state budget, the $500,000 was removed from the budget before it reached Gov. Phil Murphy’s desk, reportedly as punishment for removing incumbent state Assemblyman Nicholas Chiaravalloti from the ticket and endorsing crane operator William Sampson in his place.

Chief Financial Officer Donna Mauer said that she can only add the funds to the budget once they are awarded.

“I can only anticipate it once I receive an award letter,” Mauer said. “It’s not in this budget.”

Godesky and City Council President Sharon Ashe-Nadrowski pointed to a press release from City Hall claiming the county would cover the lost $500,000.

“I need an official letter stating that we’re going to receive the funds before I’m allowed to insert it into the budget,” Mauer said, noting that she didn’t know when the letter would be received.

“I understand that in the budget there was supposed to be $20,000 put aside for a TNR program,” Henderson said. “That is very much needed.”

Ashe-Nadrowski said that would require another resolution, which the council may do in the future. But she confirmed that the city increased the health department’s budget by $25,000 with the intent of having the TNR program operate out of there.

“I’ll make sure it gets spent the right way,” said Third Ward City Councilman Gary La Pelusa. “I think if we get a contract, up to $25,000, then we can hold that money and know where that money could be spent.”

Ashe-Nadrowski added that she and the council would begin work on drawing up a contract with animal control soon, so the council could vote on it at the September meeting.

Former city council candidate Peter Franco said that police and fire salaries accounted for nearly 30 percent of the budget, asking members if they knew the terms of the contract.

Ashe-Nadrowski recused herself, having abstained from the approval of the contract that dictates the police and fire salaries due to a conflict of interest. She made City Councilman At-Large Juan Perez temporary chair during the discussion.

Franco alleged the raises made them the highest paid in the county. He chastised the officials for not knowing the details of the contract they approved.

Franco asserted that the high ranks in the police department were political appointees: “There’s no sense in going to college anymore. Just go to one of the mayor’s functions or fundraisers, get on the police list, and be set for life.”

Franco called for more patrolmen, noting their contract hasn’t been settled yet: “I wonder where the priority of our safety is in this community?”

Some council members took issue with Franco’s assertion that the city’s higher ranking police officers did not earn their promotions.

“I’d like to defend our hardworking and excellent police force, well educated, upstanding citizens,” First Ward City Councilman Neil Carroll said. “I’ve said this in the past when they’ve been promoted, and I’ve gone to those ceremonies: I lay my head to rest at night very comfortable, thanks to these men and women out on the streets. And I was disgusted by the suggestion that they’re somehow less than.”

Perez echoed Carroll: “These police officers and firefighters study to take an examination in order to be promoted. They don’t get it as a political appointment. They work very hard, and they move up slowly.”

La Pelusa said that the language of parts of the contract are vague to allow the numbers to be worked.

“When I was councilman many years ago, that table of organization was written so that it says up to so many of a certain rank,” he said. “So it’s really for maximum numbers, not necessarily minimum numbers. And it was way lower than it was when I was first councilman back in 2006.”

The budget is down $100,000 for the Department of Business Administration due to the loss of the position.

Law Director Jay Coffey would not say if the city was not going to refill the position. But when Franco noted that the funds weren’t in the budget for the position, Coffey said “that’s a good conclusion to draw.”

The council adopted the budget unanimously. Included was an amendment to the budget, from $150,472,901, the amount of the budget when it was introduced, to $150,542,901. Some revenues and expenses were adjusted which led to the increase.

‘They still call me Cowboy’