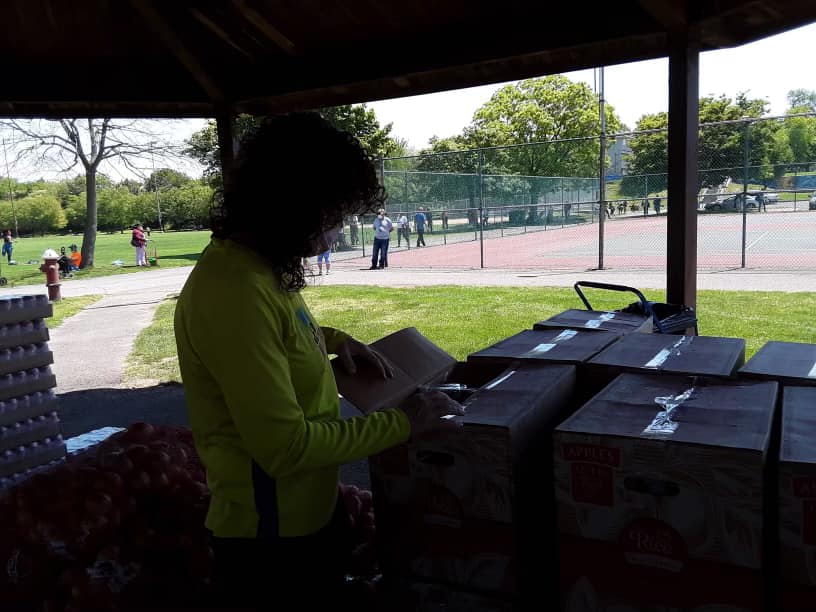 Funding intended for the Bayonne Food Bank is still in limbo.

The food bank has yet to receive a letter of no conflict of interest from the city. The letter would allow the food bank to use $10,000 in private donations and $150,000 in Community Development Block Grant CARES Act (CDBG-CV) funds to purchase nonperishable food to distribute to residents.

City Council President Sharon Ashe-Nadrowski cofounded the food bank with Business Administrator Melissa Mathews in 2020 amid the dire need for food assistance prompted in part by the COVID-19 pandemic. Ashe-Nadrowski said they are still waiting on the letter.

Ashe-Nadrowski and Mathews have been waiting on the letter from the Law Department for months.

Donations of money and food are essential for the food bank’s survival. But a nonprofit was needed in order to accept food donations from Table to Table and the Community Food Bank of New Jersey, the food sources for the Bayonne Food Bank.

When the food bank was first established in 2020, it accepted both food and monetary donations through the Bayonne Economic Opportunity Foundation (BEOF), a nonprofit, under the banner “Bayonne for Bayonne.” The money was then transferred to the city from the BEOF in order for the food bank to buy food.

However, the “hodge-podge” partnership formed during the early pandemic wasn’t a long-term solution. While the BEOF assisted with donations, it declined to operate the food bank full time.

Still searching for a solution

As a more permanent fix, Mathews proposed using her personal nonprofit, The Mathews Foundation, to operate the food bank. The idea was that the foundation could accept around $10,000 in donations raised by Ashe-Nadrowski and Mathews to purchase and distribute food.

Because Mathews is a city employee, BEOF attorneys wanted to determine there was no conflict of interest. The BEOF lawyers have reviewed the matter, but Ashe-Nadrowski and Mathews are still waiting for a letter of no conflict of interest from city attorneys indicating that the city is okay with the money being transferred to The Mathews Foundation.

The $10,000 sits in a city account pending completion of the letter. Meanwhile, $150,000 in CDBG-CV funding for the food bank is also being held up due to absence of the letter.

Funding hangs in the balance

Without access to the donations, the food bank can’t use the federal funds. The Mathews foundation would front the money, buy the food, and then draw down, or be reimbursed by, the CDBG-CV funds.

There is a timeline for the city to spend those funds, before HUD forces the city to reallocate them for other causes. And the clock is ticking.

Meanwhile, without the funds, nonperishable food distributions and deliveries have ceased. What is currently distributed at 16th Street Park each week is perishable foods donated by Table to Table and the Community Food Bank of New Jersey.

Due to the continued delay of the letter of no conflict of interest, neither the donations nor the federal funds are currently available to the food bank to purchase food.

Amid the holdup of the letter, a rift between Law Director Jay Coffey and Mathews became evident because both are part of a gender discrimination lawsuit, and a secret audio recording involved Coffey. At the July city council meeting, Coffey estimated that the letter would be done that month, but he is no longer in the mix.

The investigation into whether there is a conflict of interest has since been handed off to outside counsel, attorney Allan Roth of Ruderman and Roth. Roth is also the attorney investigating the separation agreement between the city and former Assistant Business Administrator Mark Bonamo.

Roth declined to comment on the matter. It remains unclear how much longer the investigation will take.