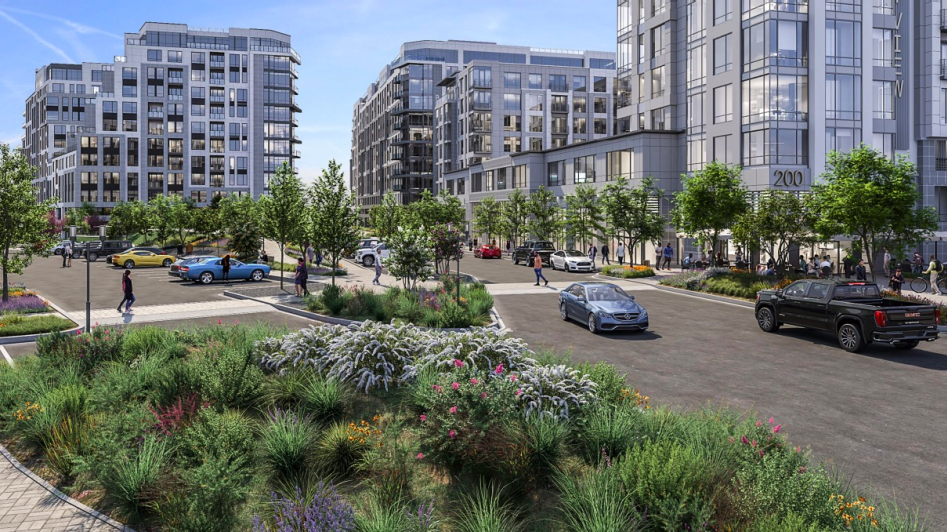 1 / 5
A rendering of the triangular park at the center of the redevelopments. 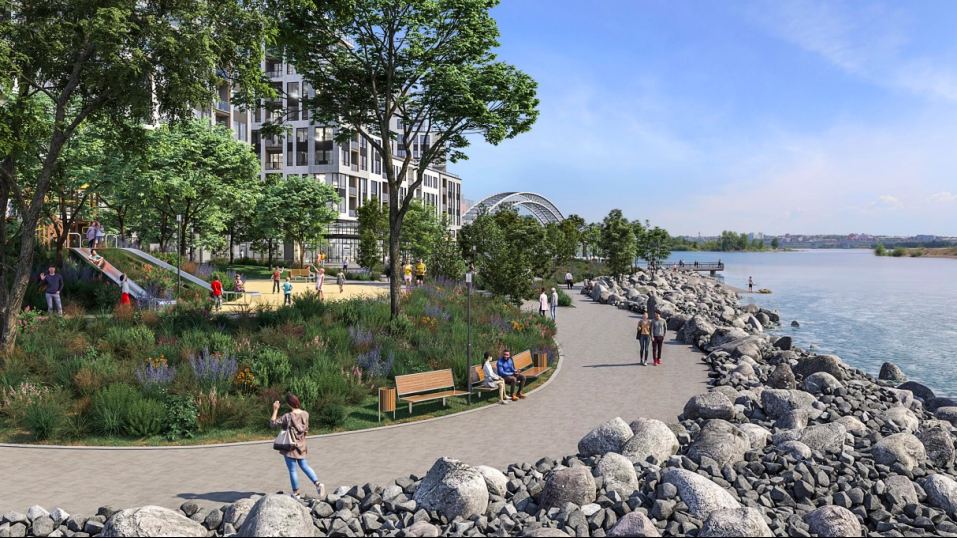 2 / 5
A rendering of the waterfront walkway that will run along Newark Bay. 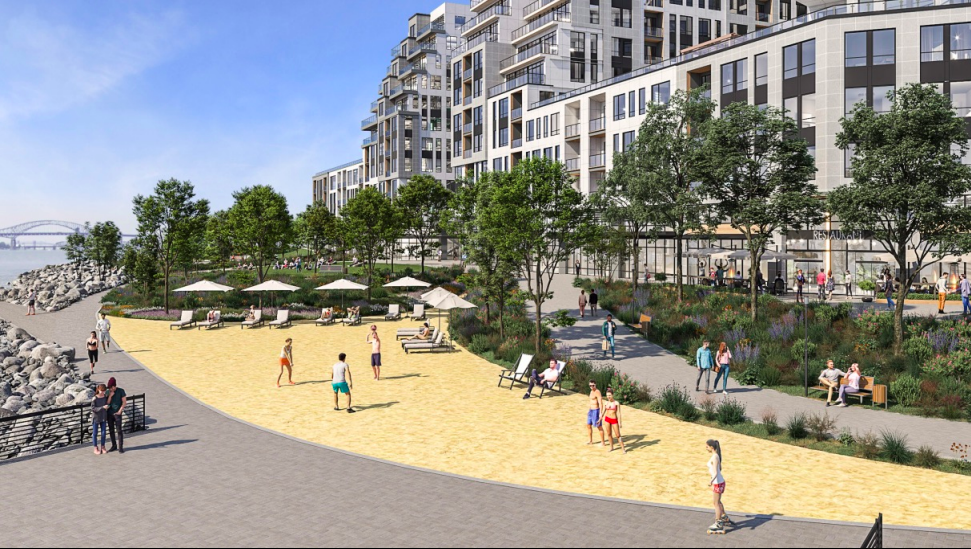 3 / 5
A rendering shows the beach that will be constructed on the waterfront walkway. 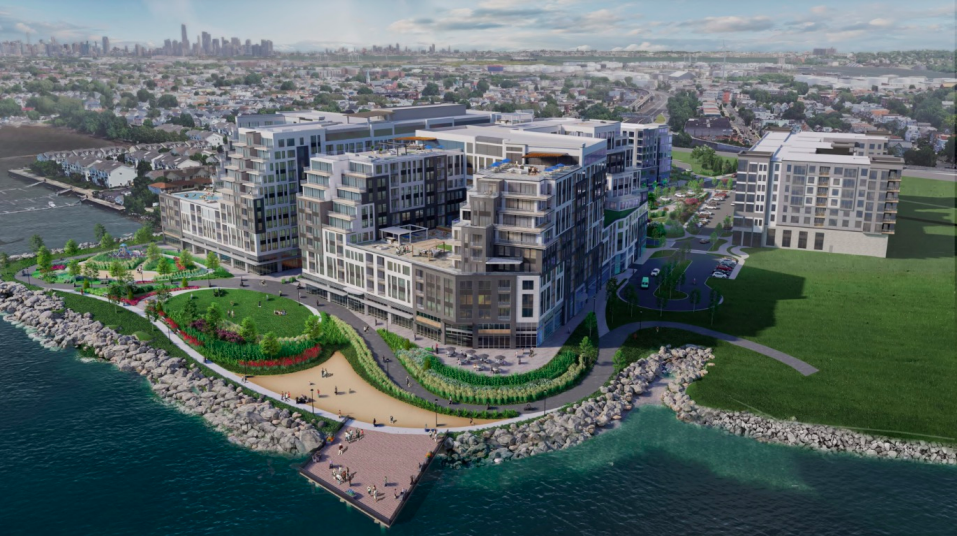 4 / 5
A rendering of the redevelopments shows how massive the project is against the backdrop of the city. 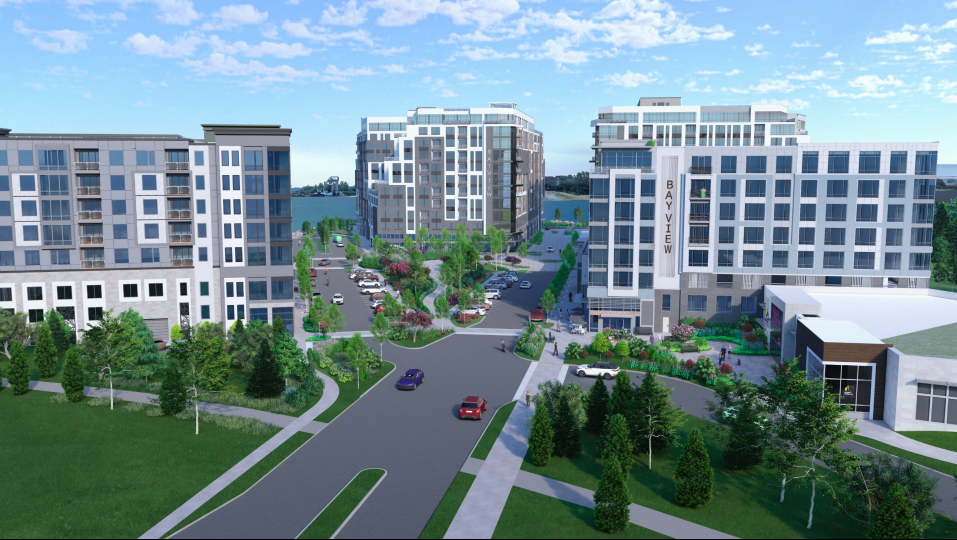 5 / 5
Another rendering of the redevelopments from above Avenue A.
×

1 / 5
A rendering of the triangular park at the center of the redevelopments.

2 / 5
A rendering of the waterfront walkway that will run along Newark Bay.

3 / 5
A rendering shows the beach that will be constructed on the waterfront walkway.

4 / 5
A rendering of the redevelopments shows how massive the project is against the backdrop of the city.

5 / 5
Another rendering of the redevelopments from above Avenue A.

The Bayonne Planning Board has approved a massive redevelopment, dubbed “Bayview,” at the 17-acre site of the former A&P.

At its October meeting, the board approved preliminary and final site plans for four out of the five buildings that will consist of the new neighborhood along Newark Bay. At the current site, the A&P has been demolished and a strip mall with some open businesses remains as well as the large parking lot.

“This site has sat still, underproductive and desolate and the city has been looking to revitalize the property,” Miceli said. “And there were financial problems with the prior owners and nothing happened, despite the city’s best efforts.”

The four buildings approved in the plans include the pre-existing Planet Fitness, two eight-story mid-rises and a twelve-story high-rise. The units in the three residential buildings total 797. The number of each type of unit, such studio, one-bedroom, etc., has not yet been determined.

The other building is a twelve-story high-rise. Including that structure, the total number of units rises to 1,100 with 1,596 total parking spaces. However, the redeveloper only sought preliminary approval for this building, meaning they would have to come back for final site plan approval from the planning board.

Miceli said that they are still working out some kinks in the plans for that building with nearby developer West 6th Street Realty LLC, represent by Clark Holden attorneys

“We received a letter from Clark Holden regarding some questions about the traffic control and traffic measures for the second access point that we’re proposing,” Miceli said.

The first phase of construction includes the network of roadways, the waterfront walkway, and a triangular park. The second phase includes a second access point to Avenue A, across from where the exit and on ramp for the Bayonne Bridge is in that area, and landscaping improvements along the avenue. Additionally, a 1,700 square foot pier will be constructed along the waterfront walkway during the second phase, built on the remains of an old railroad bridge that used to extend to Elizabeth.

“This is going to be like living at a resort hotel basically,” said project architect David Minnow. “That’s the sense of it is and we think people are looking for that today. Young people, older people have traveled a little bit now around the world, and they’ve stayed in boutique hotels and that’s the kind of feel we want to give to our tenants here.”

Miceli asked to protect the zoning of the site on behalf of the re-developer for 20 years, with a 5 year protection for the approved site plans. Miceli estimated the project would be fully completed in approximately those 20 years.

A triangular park serves as the “centerpiece” of the neighborhood. The park has 25 public parking spaces. Each of the three new buildings and the unapproved fourth one will be mixed-use, with storefronts along the new streets. The unapproved building will also have a rooftop restaurant accessible to the public.

The waterfront walkway will be constructed to feature elaborate architecture, landscaping, a play area for children, a sloped lawn, a kayak launch, and even a beach.

An over 100,000 square foot sloped lawn along the waterfront walkway can double as an amphitheater that can fit up to 150 seats.

A roundabout at the intersection of the two main roads in the neighborhood will be made up of paver stones equal with the sidewalk to increase pedestrian friendliness. A shuttle bus will operate at the site to transport residents of the buildings to the nearby 8th Street Light Rail Station. A sidewalk connection will run south from the site to 5th Street.

When asked if there would be affordable housing in any of the buildings, Miceli said there would not be. However, the re-developer is contemplating incorporating senior housing and would come back to the planning board for approval for that.

During the public hearing, a number of residents from the houses on the southern half of the block of North Street spoke out against the redevelopments. Residents argued against the height of the building, its proximity to their backyards, and raised traffic, noise, and safety concerns.

The development will be set back a few hundred feet from Avenue A, but only 50 to 30 feet from some of the backyard of homes along the southern portion of North Street.

Resident Sandeep Punjani raised concerns over safety issues with the gas pipeline under the site, which runs between the back of the properties on North Street and the site. Punjani called it a fire hazard because fire trucks could not reach that area, as new plans would not include a street in that entire location. Project engineer Matthew Neuls said that the site will be fire safe even if a truck cannot access that direct area.

Valdimir Studzinski, another resident of North Street, echoed Punjani: “If there is a construction accident and it falls onto that gas pipeline we’re in trouble.”

Studzinski continued: “That eventually that water is going to seep through our area, which is a lower line here. We’re not going to be raised up to the water level.”

In response Nuels said: “It wouldn’t work that way. This is flooding that comes from the ocean into the Bay.” He added that the buildings would account for their own storm water management.

Lia Dudine, who also lives on North Street, had concerns over lighting and noise. Neuls said the lighting was low and was facing the ground and that nearby Evergreen trees along the site would be added to help provide a buffer.

Studzinski also took issue with the proximity of the building to his house: “If they could go to the existing curb which is 54 feet, that gives us a little breather. At 31 feet, we’re going to be up against the wall.”

In closing, Miceli defended the site plans before the council voted: “We did exactly what the redevelopment plan asked us to do. It said to give amenities, we gave that. It said give open space, we gave that. We’re building a big park, it’s a lot of open space.”

The height is compliant with the redevelopment plan and even decreases the closer toward Avenue A, Miceli argued. However, in response to resident complaints about the 30 foot setback between the northernmost 12-story high-rise and the backyards of homes on North Street, Miceli said the redeveloper would be make it 40 feet to give residents more space.

The board voted unanimously to approve the project, which was given several conditions of approval by officials including keeping the Evergreen trees along the back of the houses on North Street in tact as much as possible and to develop a pipeline protection plan.