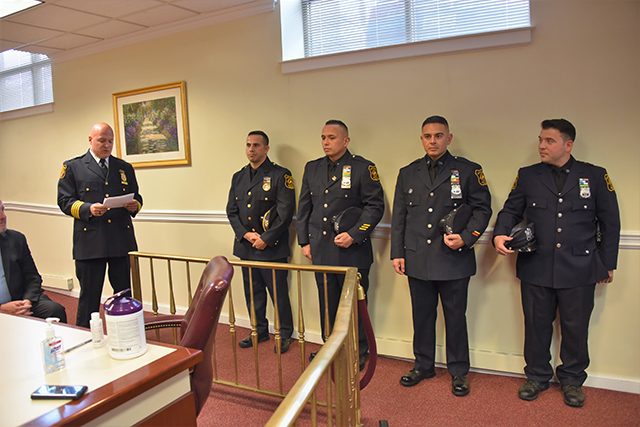 A number of Jersey City students were awarded degrees from the Georgia Institute of Technology following the conclusion of the summer semester. They include Haoyun Cao, Xingyu Chen, Suiki Lau, Shaojuan Liao, Hongru Liu, Shuyi Wang, and Hancheng Xiao.

Robert Arena, a coach for the girls track and cross country at Snyder High School, was found dead in his home in Jersey City on Monday. He was 36.

A GoFundMe campaign called the Robert Arena Memorial Scholarship fund was launched “to recognize student athletes who believe in a proclamation that hard work will lead them to success.”

North Bergen Mayor Nicholas Sacco and Police Chief Peter Fasilis presided over an Oath of Office Ceremony on Oct. 22 during which four officers of the NBPD received promotions: Christian Argudo was promoted to lieutenant and Ramon DeJesus, Robert Garcia, and Jason Solan were all promoted to sergeant.

A renown local restaurant in Secaucus, Lorenzo’s Italian Restaurant and Bar, has bid its farewell. The restaurant on County Avenue closed its doors forever on Sept. 29 after 29 years.

In it’s place will be a bus parking lot. Academy Bus bought the property earlier in the year and plans to demolish the building to enable bus storage on the planned parking lot.

The restaurant was a local favorite, beloved by even those outside of Secaucus. In 2019, Ronnie Ortiz-Magro, one of the stars of “Jersey Shore,” alleged he was “jumped” in the parking lot of Lorenzo’s. He said he had his chain stolen and was seen with a black eye on the show. In response, his co-star Mike “The Situation” Sorrentino famously asked in disbelief: “In Secaucus?” prompting it to become an internet meme.

The NJ Department of Transportation has announced that the Route 495 rehabilitation project is substantially complete. However, a short-term milling and paving project has begun that will take place in October and November.

Crews have been working overnight to repair inlets and will mill and pave the roadway between mileposts 0.94 to 1.81, east of the Route 495 Bridge over Route 1&9 rehabilitation project in North Bergen, through Union City to Pleasant Avenue in Weehawken.