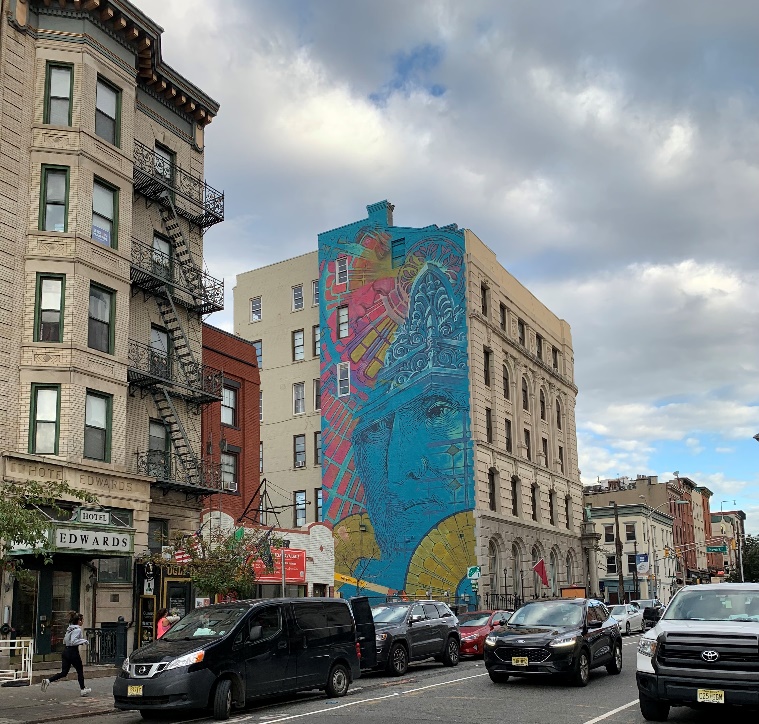 A new mural by artist Beau Stanton was revealed at 51 Newark St..
×

A new mural by artist Beau Stanton was revealed at 51 Newark St..

Hoboken and the Hoboken Business Alliance have revealed a new mural at 51 Newark St., depicting the city’s history and architecture as part of the HBA’s new Mural Arts Program.

The new 70’ x 45’ mural was unveiled at the corner of Newark and Hudson Street. Created by artist Beau Stanton, the mural presents Hoboken’s founder John Stevens “peering through the Tiffany-stained glass that intermingles with the beaux-arts ornamentation prominently featured in the Hoboken Terminal.”

“I’ve had the privilege of creating murals in various communities around the world, so it is very important for me to create imagery and themes that are site-specific and deeply rooted to the neighborhoods I’m working in,” said Stanton. “My studio is just across the river, so I was familiar with the unique charm Hoboken has.”

The project took Stanton several weeks in researching the Mile Square City’s history and looking through the surrounding areas, and approximately seven days to complete the mural.

“While we have been inspired by the surge of street art in major cities around the country, we are committed to crafting a public art program that is unique to Hoboken and all the things that make us a distinct city,” said Mayor Ravi Bhalla in a press release. “Murals like this have the power to transform space, fund the creative economy, and will help to tell the stories of Hoboken’s rich history and evolving present.”

The Hoboken Business Alliance and its mural subcommittee will be identifying new locations for future mural installations.