The opening reception is Nov. 6 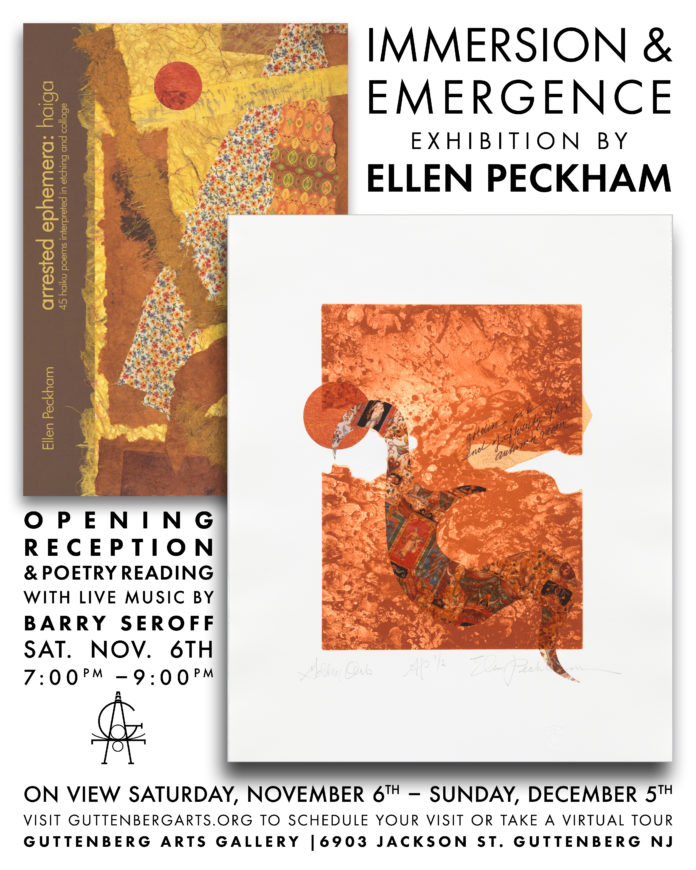 Guttenberg Arts Gallery is open by appointment only Tuesday – Sunday, 10 am. – 4 p.m. and virtually on our website. Patrons can schedule their visit or view the virtual gallery by going to www.guttenbergarts.org/exhibitions.

Ellen Peckham is a New York based visual artist and poet who has read, published and exhibited in the U.S., Europe and Latin America. She frequently uses both art forms in a single work, the text decorating and explicating and the image illuminating.

“When I was young long ago,” Peckham said, “we were taught that the artist should concentrate on one medium:  oil, sculpture, pastel, etc. and certainly not presume to communicate in more than one voice. I remember being fascinated by Van Gogh’s letters, Blake’s prints with his poetry, Haiga, the Japanese form containing poems and drawings.  But, listening to my masters, I accounted these  beyond the normal range of living mortals, certainly of a female. So when, bit by bit, I became aware of the multiplicity of expression by artists of both genders I broke from my cultural limits. I use various voices alone or layered.

“Poems can stand alone, be published without visuals or be included in visual art as illumination, as gloss, as decoration. And etchings are sometimes printed on collages of paper, fabric; scraps saved from my personal history, freighted with memories and associations that I hope enhances the intensity.”

Barry Seroff is an award winning composer and songwriter based in Danbury CT. His formative years in NYC were spent playing guitar in metal and hardcore bands, and obsessing over music at the fringes. Out of college, he made his mark as a composer with ensembles Anti-Social Music and ThingNY, as well as improvising in the downtown jazz scene with luminaries such as Marc Ribot, Daniel Carter and William Parker.

He is the composer of the critically praised ‘Democracy’, which was released by Navona records in 2013 and premiered at Issue Project Room in Brooklyn. Soon after, he joined the progressive rock band Edensong as flautist, with whom he has toured internationally.

Upon moving to CT, his focus on the musical stratosphere came to Earth with a shift to songwriting. These songs first manifested themselves in the band ‘The Accidental Villain’, who released their first self titled album in 2015. This was followed by performances in CT, proving to be perfect music to accompany drinking and dancing (despite some outlandish improvisational forays). This was followed by the EP ‘Spent’ in 2020 at the beginning of the quarantine.