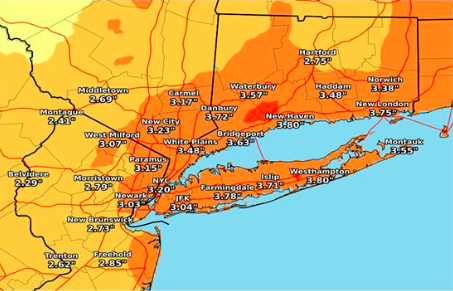 A map showing the inches of rain estimated to fall on the area until Wednesday morning. Image vis the National Weather Service
×

A map showing the inches of rain estimated to fall on the area until Wednesday morning. Image vis the National Weather Service

Mayor James Davis has declared a State of Emergency in Bayonne effective 8 p.m. on Oct. 25 in preparation for the strong Nor’easter that began pummeling the area later that night.

“I have declared a State of Emergency as we prepare for this strong storm,” Davis said. “I urge all residents to avoid any travel beginning tonight through Wednesday morning.”

Davis also issued a Travel Advisory, asking all residents to refrain from driving unless absolutely necessary. Additionally, the National Weather Service has issued a Flash Flood Watch and a Wind Advisory.

The storm is expected to pour up to eight inches of rain in the city, along with heavy winds throughout the day on Tuesday, according to the Bayonne Office of Emergency Management (OEM).

Due to the adverse condition, all residents are requested to avoid being on the roads. If travel is necessary, avoid driving into flooded roadways, OEM said. Flooding has been a major problem in the city during recent storms, with many cars being damaged during Hurricane Ida.

OEM also asked residents to secure any Halloween decorations or other loose items around properties amid the wind conditions. Due to the strong winds, there is a chance of power outages, according to OEM. Residents are advised to report all power issues to PSE&G. Never approach downed wires or tree limbs.

Due to the storm, schools in the city closed for Oct. 26, without virtual instruction. All parking meter enforcement and street sweeper enforcement is cancelled temporarily. OEM advised residents to continue to check official social media pages or the city’s website at bayonnenj.org for more weather-related updates.