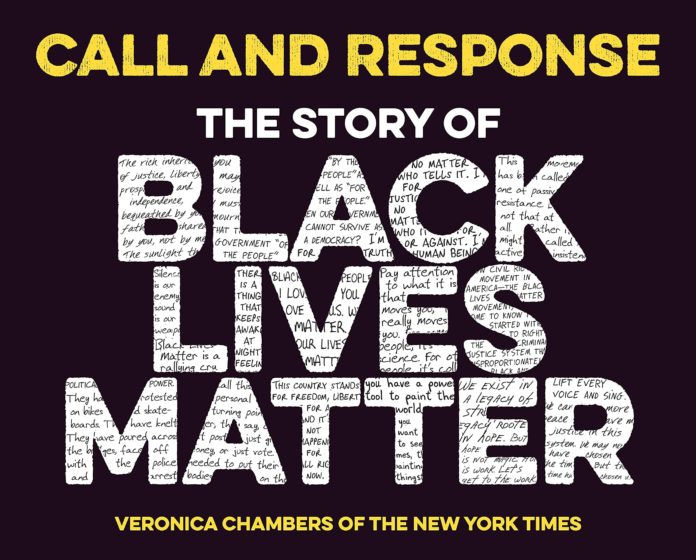 When you think “call and response,” you may think of protest chants like “Whose streets?” “Our streets!”— groups of voices joining together to form a powerful rallying cry. Call and Response: The Story of Black Lives Matter, published by Versify/Houghton Mifflin Harcourt on August 17, is an essential history of Black Lives Matter centered on those voices, beginning with the movement’s founders Alicia Garza, Patrisse Cullors, and Opal Tometi.

Authors Veronica Chambers and Jennifer Harlan of The New York Times document the pivotal moments that galvanized Black Lives Matter, featuring stories and quotes from the activists that built upon a vision to stand up for racial justice.

The event will be hosted by the independent bookstore Little City Books. Registration can be found on https://www.littlecitybooks.com/event/veronica-chambers-virtual-classroom-talk-call-and-response . Call and Response can be purchased in hardcover at $21.99 from Little City Books and wherever books are sold.

Nearly 100 striking New York Times photographs accompany the text, setting Call and Response apart as a visual narrative of the protests that changed the course of history. Working together with Chambers’s text and stunning graphics, the book traces BLM’s growth from a hashtag to a global campaign for racial justice. Whether it serves as an entry point to antiracist organizing for young readers or a resource offering a deep dive into the movement’s history, Call and Response honors the spirit and strength of Black Lives Matter within the long legacy of the struggle for Black freedom.

Veronica Chambers and Jennifer Harlan will discuss Call and Response: The Story of Black Lives Matter in a virtual Zoom event on Monday, November 1 at 1:00pm ET. This event includes a presentation of New York Times photography from the book’s collection. The authors will be joined by moderator Jordan Hernandez, founder of the Completely Booked book club, newsletter, bookstagram, and product line, which focuses on diverse authors and stories.

Veronica Chambers is the editor for Narrative Projects at The New York Times. She is a prolific author, best known for the New York Times-bestseller Finish the Fight!, which was named a best book of the year by The Washington Post, the New York Public Library, and others. Her other works include the critically acclaimed memoir Mama’s Girl, Shirley Chisholm Is a Verb, and the anthologies The Meaning of Michelle—a collection by writers celebrating former first lady Michelle Obama—and Queen Bey: A Celebration of the Power and Creativity of Beyoncé Knowles-Carter. Born in Panama and raised in Brooklyn, she writes often about her Afro-Latina heritage. She speaks, reads, and writes Spanish, but she is truly fluent in Spanglish. You can find her online at veronicachambers.com or on Twitter and Instagram @vvchambers.

Jennifer Harlan is a staff editor on the Special Projects desk at The New York Times. She is a co- author of the New York Times bestseller Finish the Fight!: The Brave and Revolutionary Women Who Fought for the Right to Vote, which was named a best book of the year by The Washington Post, the New York Public Library, and others and selected as a 2020 honor book by the Jane Addams Peace Association. A graduate of Brown University, she is from Louisville, Kentucky, and currently resides in Brooklyn. When she is not writing about the unusual histories of roller derby, private eyes, or women’s suffrage for The Times, she can usually be found baking pies or searching for her next great karaoke song.