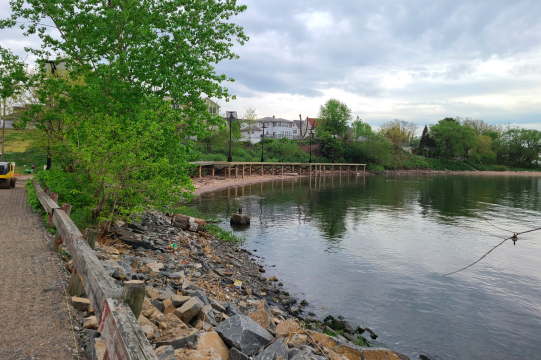 A view of the boardwalk under construction as part of the first phase of the project.
×

A view of the boardwalk under construction as part of the first phase of the project.

The Bayonne City Council has adopted an ordinance bonding for improvements to 16th Street Park waterfront. The council voted unanimously to do so at its October meeting.

“This is actually a grant that we’re applying to from the federal government through the Department of Environmental Protection,” Mack said at the October city council meeting. “We have to bond for the money and put the money up to get reimbursed.”

The city is applying through the DEP to the National Park Service’s Land and Water Conservation Program’s Outdoor Recreation Legacy Program. All applications must submitted by states on behalf of qualifying jurisdictions.

Mack said that the city is still in the running for the grant: “We do not know at this point in time whether we will receive it. We’ve made it through the first round, so we’re hopeful we’ll be able to get it.”

The finale of a larger project

According to Mack, these renovations along the waterfront of 16th Street Park will be the final touch to recent and planned upgrades in the park.

“We’ve been doing improvements along the 16th Street waterfront,” Mack said. “We just opened the kayak launch, but we’ve also done part of the walkway. This is part of an ongoing project that is just missing the final piece. So that’s what we applied for.”

According to the application, the renovations “would not only improve the waterfront and provide waterfront walkway connection to the adjacent park but would also provide water dependent active recreation opportunities where they do no exist or exist only in limited capacity. It would provide improved boating access, including separation of canoe and kayak users from the boat ramp used by trucks and or trailers. It will provide a public recreation fishing pier that does not exist in this area of the city.”

The proposed improvements will also provide improved access under Americans with Disabilities Act (ADA), according to the application Passive recreational improvements include benches and walkways with lighting “where none exists now” as well as landscaping to provide “shade and appeal to users of the park amenities.”

Other environmental and aesthetic upgrades include further clean-up of the damaged and degraded shoreline, structural and vegetative protection against future erosion, establishment of native vegetation and improvement of wetland that are intended for habitat restoration, and a living shoreline in accordance with NJDEP Coastal Zone Management Rules.

Next phase in improvements?

This is the next phase of renovations to the waterfront area of 16th Street Park. The project was developed in 2017, and bids were received in 2020. The full scope of the project has been permitted and bid and the project is “shovel ready,” according to the application.

Using the funding from Green Acres and the Office of Natural Resources Revenue, the initial phase of the project includes a boardwalk and living shoreline along the southern 500 feet of the park, both of which are currently under construction.

However, even with those funds there was not be enough money available for immediate full buildout, so the city has applied for another grant to help with the costs of the next phase.

The remaining improvements include: a recreational fishing pier with handicap access, removal and reconstruction of a boat ramp, a waterfront boardwalk, erosion control and plantings to establish a living shoreline, and a reconstructed walkway and extension of it along Newark Bay to provide continuous access to Veterans Park at 25th Street. The city has committed to using Hudson County Open Space Funds already issued to it to help complete these renovations in the amount of $750,000, according to the application.

If the city receives the federal grant, the project will break ground in a year and be completed and open to the public in two years.