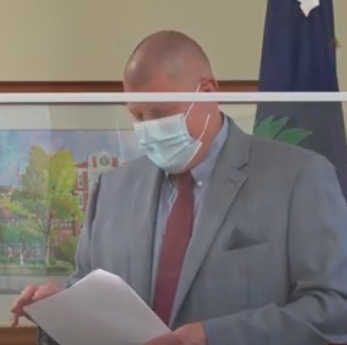 Superintendent John Niesz addresses the Bayonne Board of Education at the open public workshop before the August meeting.
×

Superintendent John Niesz addresses the Bayonne Board of Education at the open public workshop before the August meeting.

Superintendent of Schools John Niesz is calling on Gov. Phil Murphy to amend the law when it comes to remote instruction.

“On behalf of the City of Bayonne School District I write to you to implore you to change the law for the continuity of instruction,” he wrote in an Oct. 27 letter to Murphy.

The law in question, P.L. 2020,c.27, states that a remote instruction plan would be implemented only “during a district closure lasting more than three consecutive school days due to a declared state of emergency, declared public health emergency, or a directive by the appropriate health agency or officer to institute a public health-related closure.”

According to Niesz, this law and the New Jersey Department of Education guidance is flawed when emergencies occur.

“I would like to draw your attention to the recent declaration of emergency that you declared on Monday, October 25, 2021 through Tuesday, October 26, 2021,” Niesz said. “A major storm was due to strike the State of New Jersey. In preparation for the storm you declared a State of Emergency for the entire State of New Jersey and the City of Bayonne in conjunction with Mayor James Davis declared a state of emergency as well.”

When the district was forced to close due to the storm, it could not opt to provide children with remote instruction due to the law.

“The school district closed for the school day on October 26, 2021 in the abundance of safety and security of our 10,000 students,” Niesz said. “We could not choose a remote learning option, since the emergency did not last more than 3 days. I tried in vain to advocate for a remote option for our school district to the Department of Education, to no avail. I implore you to reconsider the option for school districts to choose a remote option when our cities and towns in conjunction with the State of New Jersey declare a state of emergency.”

Learn now rather than make it up

According to Niesz, it makes more sense to allow remote instruction on days like these rather than to make up the days at the end of the year.

“Governor Murphy, it makes sense to allow students to remain learning in their homes during a declared state of emergency,” Niesz said. “We have the technology for all of our learners to do so. Why not have a full day of remote instruction safe in your home during a declared state of emergency rather then have students extend the school year on a half day at the end of June? While I am proud of our teachers and students, I think we all know what the last day of school looks like, let’s keep students engaged during the school year at all times. The traditional snow day can still be an option however, we must adapt to the ever changing landscape of our technological capabilities.”

Niesz reiterated his calls to allow virtual instruction during a local State of Emergency and any subsequent closures.

“The law for the continuity of instruction should allow schools the discretion to switch to remote instruction if there is a State of Emergency declared in our respective cities and towns,” Niesz said.