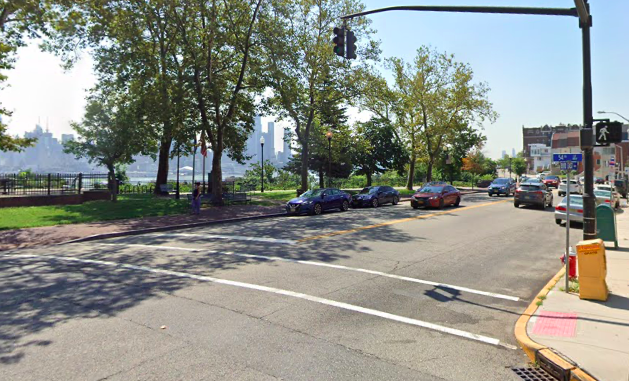 1 / 2
The intersection where Coppola's dog was struck and killed while he was trying to cross the street. Image via Google Maps

2 / 2
The West New York Commissioners continue to meet via Zoom.
×

1 / 2
The intersection where Coppola's dog was struck and killed while he was trying to cross the street. Image via Google Maps

2 / 2
The West New York Commissioners continue to meet via Zoom.

Edward Coppola, a West New York resident who lives on Boulevard East, was walking his dogs and crossing the street on the morning of Oct. 3 when it happened.

“I was crossing the street at 54th, no cars around early Sunday morning. A car speeding ran us down, myself and my dogs. He missed killing me. He did kill my dog. And he ran the red light,” Coppola told the West New York Board of Commissioners at its October meeting.

Coppola said that a similar thing happened to his neighbor’s dog three weeks ago. And years before that, he said a baby girl was killed when a speeding bus hit a light pole that crashed down on her and her family. Coppola wants measures put in place to prevent this from happening again to either a dog or a person.

“I’ve called the county, I’ve called the state, I would really appreciate a speed camera, a speed bump, or anything you could possibly do to avoid a tragedy,” Coppola said. “I was walking across with a dog. I could have been walking my child across. It is unbearable on weekends.”

Coppola said he knows it is a county road, but asked for a speed camera at the least.

“Over the summer, the Christopher Columbus Monument was spray painted and within 24 hours they put up a camera,” Coppola said. “That’s all I’m asking, anywhere between 60th and 54th Street. You need to put something to defer the speed, the lights don’t work. You need like a speed bump or something.”

Town is working on it

Mayor Gabriel Rodriguez offered his condolences to Coppola for his loss: “It’s a very unfortunate situation. I am hearing you loud and clear.”

Rodriguez said he is aware of the issue and has discussed installing speed cameras or speed bumps on the county road it in the past with Special Projects Manager Johnathon Castaneda.

Castaneda said that due to the traffic rating on the road, he doesn’t think a speed bump is possible. Coppola again asked about speed cameras with accompanying signs that display how fast the driver is going as they pass it.

“Those are investments that have been in the works,” Castaneda said. “I don’t have a specific timeline on that, but it is something that, considering your comment and the obvious urgency of this, is something that we will definitely prioritize now.”

Coppola urged the town act sooner than later to prevent another death.

“My dog is gone,” Coppola said. “But next time, if a father is taking a baby across the street and he gets hit, how quickly will something get done? Urgency is relative. I just want to know what I could do to push this boulder up the hill a little bit faster.”

According to Coppola, one of his neighbors has two daughters who she walks across the street frequently. He worries that she and her kids, or kids crossing the street from Memorial High School nearby, may get struck by speeding drivers.

“I’m telling you, those cars go flying and you can’t even see it because it’s an S curve,” Coppola said. “Just put some kind of deterrent. I don’t care what it is.”

Castaneda said it would be a priority of the town.

Thinking of the children

“I have two young girls,” Wilson said. “I have a two year old and I have a five year old. We’re outside, we walk. They hold my hands and we walk. It is terrifying to know that there are cars that have no regard to who’s on the road and they’re speeding. It’s not safe. I am horrified that Ed had to lose his pet, someone that is so near and dear to him. And if it was a loss of a child, there’s nothing that you could do to take that loss away from one of us. But his seems like a very simple solution.”

Wilson suggested slow down signs be put up in the interim while the town works out a long-term solution, whether it be cameras or something else.

“I will gladly pay for it myself if that is what needs to happen,” Wilson said. “We really need a solution that keeps or children safe, our nanny safe, our grandparents, parents, or residents safe. I think its probably one of the most trafficked roads in town.”

Rodriguez said the town will share the information with the county and the local police department both for an immediate solution in the interim and something more long term.

Commissioner Yoleisy Yanez said: “This is horrifying and I’m sure we’re going to make this a priority. This can’t happen anymore.”

Pastor John Sharp from Trinity Reformed Church in West New York continued calls for a speed detterent in the area. He added that Coppola has a broad range of support: “It’s not just simply the neighbors that live on that corner that are in support of Ed. I’m representing an entire congregation. I do thank God that this body is willing to do something to help correct it. If the support of a church would be more helpful in expediting this process, I just wish to do that.”

Since the meeting in October, the town has put up two speed signs with cameras between 60th street and 54th street on Boulevard East, according to town spokesperson J.P. Escobar. 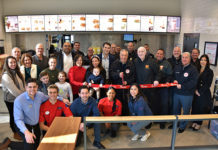