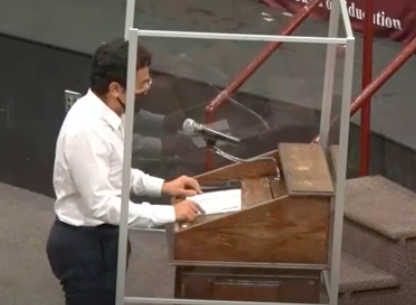 1 / 2
Mark Basta, president of Turning Point USA at BHS, defended the student group to the board at its October meeting. 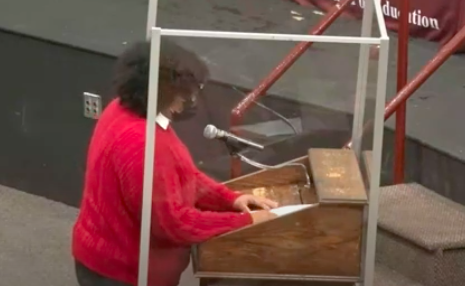 2 / 2
Carmella Scott, president of the LGBTQ+ and Allies Club, spoke out against Turning Point USA at BHS.
×

1 / 2
Mark Basta, president of Turning Point USA at BHS, defended the student group to the board at its October meeting.

2 / 2
Carmella Scott, president of the LGBTQ+ and Allies Club, spoke out against Turning Point USA at BHS.

Students are now chiming in to the discussion regarding Turning Point USA at Bayonne High School.

Controversy has surrounded the local chapter of the student group after two BHS teachers spoke out against the group, taking issue with its association with the national organization.

Turning Point USA has made headlines for its controversial stances and actions, such as keeping a watchlist of professors whom they claim are “leftist” and busing in people to the protest that became the pro-Trump insurrection at the Capitol on Jan. 6.

At the September meeting of the Bayonne Board of Education, the teachers asked the board to intervene, with one asking to change the club to remove any reference to Turning Point USA. Now students are voicing their opinions.

Carmella Scott, a senior and the President of the LGBTQ+ and Allies Club at the BHS, spoke out against the local chapter of Turning Point USA, echoing much of what teachers had said in September.

“I am a trans, queer, minority here and lately I’ve been uncomfortable with the development of Turning Point USA chapter here in Bayonne,” Scott said. “The values and morals of this organization are a direct attack against people like me and others in the school. The school is made up of gay, queer, trans, Black, Hispanic, Muslim, and many other people. So why do we, as a school, allow a club that is known for hatefully questioning the very existence of these ethnicities, religions, sexualities, and genders.”

Scott said that a number of other students feel uncomfortable about the group’s presence: “Many students like myself have expressed our feelings towards Turning Point USA. Going to school every day knowing that some of our current and former classmates are against our rights is very damaging to us. Minorities already go through enough very difficult experiences making our lives harder and knowing that this club is in full effect and people are actively enrolled in it makes me and other students very uncomfortable.”

While the LGBTQ+ and Allies Club acts a safe space at BHS, Scott said that Turning Point USA’s existence at BHS still has students feeling “targeted.”

“We do our best as a club to try to make our members feel safe and welcomed in the school community,” Scott said. “But allowing students the opportunity to create Turning Point and allowing it to continue to this day leaves many of us feeling unsafe. Clubs like LGBTQ+ and Allies and Young Black Excellence feel targeted by the hateful history of this organization… Bayonne prides itself on being a judgment-free zone with the zeros tolerance policy. So why is a club founded by people who are known for targeting, bullying, and harassing people who differ from them, allowed to exist in a school where a majority of students are minorities? Bayonne High School is a diverse school for people with many different values, though I’m sure many people would find common value in a truly judgment-free school.”

Zarya Keith, a senior at BHS, also felt uncomfortable about the group.

“At first glance, I and many others thought nothing of the group, as it is portrayed as a debate club which is something I fully support and even considered joining,” Keith said. “With further research and understanding, I learned that it was not what I believed it to be at all.”

Kieth said her opinion changed of the group after doing some research about the national organization. “Learning that the national chapter of Turning Point has ties to alt-right and white supremacist groups is quite alarming to me and other students of color. White supremacy is defined as the belief that white people constitute a superior race and should therefore dominate society, typically to the exclusion or detriment of other racial and ethnic groups in particular Black or Jewish people. Being that I am a student of color, the name Turning Point can be seen as threatening to me and my fellow peers.”

Keith said people of color are already uncomfortable at school, and this adds to it: “Students of color already feel a sense of unspoken unease throughout their school career. I personally have done dealt with a teacher that was blatantly racist towards me and refused to see the error in what she said. Students of color have to deal with microaggressions, homophobia, racism and just plain disrespect towards them on a day-to-day basis. This goes unnoticed by fellow teachers and students alike. These instances are sometimes overlooked or considered to be an overreaction on the part of the student, but I believe that this is one of those times that students are allowed to be upset and should speak out.”

While the it certainly has its detractors, at the meeting two club members defended the student group.

Mark Basta is a senior and the president of Turning Point USA at Bayonne High School. Basta addressed the board, stating that the organization is currently running a bake sale in support of breast cancer and that it regularly runs fundraisers for such causes.

“Why do our own educators come out here and call that we are an unfit group at BHS that follows a racist, neo-Nazi, and terrorist organization?” Basta said. “I find absolutely no reason for this. And by the way, I am a person of color. I am not white. And I see none of these worries.”

Basta continued: “I can confidently say that our chapter works under Turning Point USA, a leading organization and political activism for youth,” Basta said. “Turning Point USA at BHS is a registered club that works on growing the students sense of political and civic engagement which falls under the school’s vision.”

Aditionally, Basta criticized the teachers who spoke out about the student group: “How can they give speeches of critique on our activities when I saw none of them in a single meeting or event of ours? If anything our educators need to learn how to respect the administration’s decision in approving this club and to respect opposing opinions. If they have any more concerns our meetings are always announced in the morning and all are welcome to attend.”

Basta ended by asking if the board supported the group, to which there was no response from any trustees.

Jessica Longobardi, the vice president of the club, also came to its defense: “TPUSA at Bayonne High School does not encourage any hate… I really recommend anybody, even teachers, please come to one of our meetings… Last time we just talked about like inflation and COVID.”

According to Superintendent of Schools John Niesz, the issue is a complex legal matter.

“Censuring or curtailing speech is a very complicated question,” Niesz told the Bayonne Community News. “Legal scholars dedicate their lives in an effort to solve this very issue. We have been advised that US Supreme Court has long recognized that students do not shed their Constitutional rights to freedom of speech or expression at the schoolhouse gate.”

The board is not in a position to act against the club, but the group can expect to be the focus of further attention from officials.

“Numerous other laws and statutes also protect a person’s freedom of speech, expression, and association, even if disfavored or controversial,” Niesz said. “We will continue to monitor the situation just as we would any other club or organization.”

While high school teachers and students alike are not happy about it, the conservative student group appears to be here to stay.