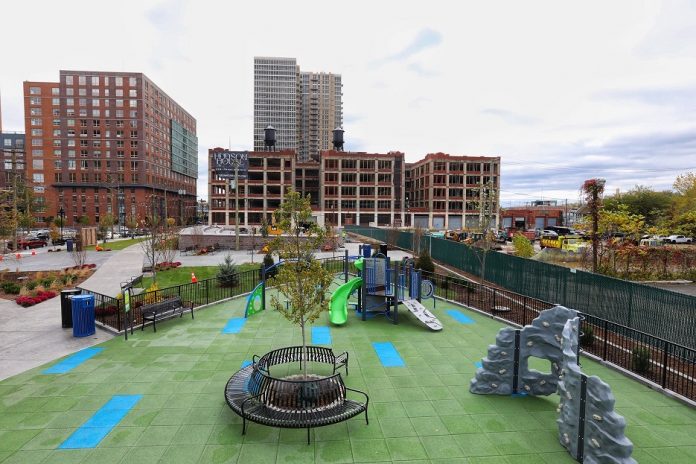 Jersey City held a ribbon cutting ceremony for the opening of Cole Park, located on Coles Street between 16th and 18th Streets in downtown. Developed by the Manhattan Building Company, the 1.5 acre playground features a playground, an amphitheatre, green space, and flood mitigation.

For his 95th birthday, North Bergen resident Ernesto A. Benavides wanted one thing: a hug from Mayor Nicholas Sacco. And on Friday, Oct. 22, he got it, at a ceremony in town hall chambers where the mayor and other officials presented Ernesto with a framed certificate honoring his birthday earlier this month.

New Jersey Blood Services is looking for volunteers to help the organization. No medical background is necessary, and all training is provided including additional precautions for safety. Volunteers must also have transportation. To apply, visit www.nybc.org/support-us/volunteer-nybc/volunteer-application/.

Jersey City Theater Center will be presenting a live-streamed performance of “Schwarz Gemacht” by Alexander Thomas, a show about an Afrodeutscher (Afro-German) actor in 1938 Berlin. JCTC will also be interviewing Thomas for “Black Space” on Nov. 3 at 7 p.m.. Tickets for the performance are available at www.seetickets.us/event/Canada-and-Germany-Schwarz-Gemacht-by-Alexander-Thomas/446837, and registration for “Black Space” can be found at www.seetickets.us/event/Black-Space-Ep-7-Alexander-Thomas/449991.

A Union City man has pleaded guilty to charges related to his involvement in the November 16, 2020, death of 56-year-old cyclist Marcelino Pico, according to the Hudson County Prosecutor’s Office.

On Thursday, Oct. 28, Miguel Perez pleaded guilty charges related to the incident. Perez, 29, of Union City, pleaded guilty to one count of second-degree Leaving the Scene of an Accident Resulting in Death and the associated motor vehicle summons.

The state is recommending a sentence of seven years in New Jersey State Prison along with a consecutive two year driver’s license suspension. The plea was accepted by Judge Angelo Servidio. Sentencing in the case is scheduled for January 5, 2022 before Judge Servidio.